There aren’t a lot of films where pigeons are seen in a positive light. Even in real life, they’re rather annoying birds that pester you for food and cover park benches in poop. But Tito and the Birds has them as key for a cure during a pandemic. The movie comes out on Blu-ray on April 23. Here’s the press release from Shout! Factory: 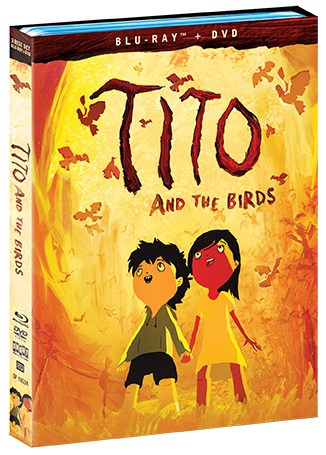 Tito and the Birds

A film about a shy little boy and his journey to save the world, Tito and the Birds is a stunning work of filmmaking with a socially relevant story. Mixing expressionist influences with a vibrant palette, this gorgeously animated film tells an uplifting and insightful story about a boy fighting to find out what is right and to learn how to overcome his own fear. Making its Blu-ray + DVD and Digital debut April 23rd, 2019 from Shout! Studios, the release contains both the original Portuguese language version of the film with English subtitles, and the English language dub, as well as an interview with filmmaker Gustavo Steinberg and director Gabriel Bitar as a bonus feature. Fans can pre-order their copies now by visiting ShoutFactory.com

Nominated for an Annie Award for Best Animated Feature-Independent, the film is directed by Gustavo Steinberg (End of the Line), Gabriel Bitar (Cidade Cinza), and André Catoto (Say I Am Only Seventeen), written by Eduardo Benaim and Gustavo Steinberg, and features an original score composed by Gustavo Kurlat and Ruben Feffer (Academy Award®-nominated animated feature Boy and the World). Tito and the Birds premiered in competition at the 2018 Annecy International Animated Film Festival, and won the Best Feature for Children at Anima Mundi 2018.

Tito and the Birds Synopsis
Tito and the Birds is a film about a little boy and his journey to save the world. Tito, a shy 10-year-old boy, lives in a world on the brink of pandemic. Fear is crippling people, making them sick and transforming them. Tito realizes, based on his father’s past research, that there may be a way to utilize the local pigeon population and their songs to create a cure for the disease. His father was forced to leave when Tito was only six and the struggle to find a cure becomes linked with the search to find his father again, along with his own identity.

Part action, part drama, Tito’s journey is at once an uplifting and insightful adventure about a boy fighting to find out what is right and to learn how to overcome his own fear.