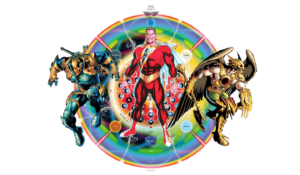 Who Is The New Deathstroke? What Haunts Hawkman? Shazam Family Peril? Solicitations and covers below.

In the wake of Slade Wilson’s death, a new Deathstroke has vowed to complete his last, unfinished assignment. But the master assassin Shado has plans of her own, looking to step in for the late, great World’s Greatest Assassin and usurp his place in villainous hierarchy. Meanwhile, Rose Wilson discovers the identity of the person responsible for her father’s death. Can her brother, Jericho, stop her from seeking vengeance?

Also in this issue, Slade Wilson’s son Jericho accepts Lex Luthor’s offer of power—but he’s determined to use it as a force for good…so why is Lex smiling?

Carl Sands returns as the new, improved Shadow Thief! Newly upgraded by Lex Luthor, he’s now the undisputed master of shadows. Meanwhile, Hawkman continues to be haunted by horrific memories of his past lives. Could Shadow Thief be the cause of his nightmares? Or is it something more sinister?

As Billy Batson and the rest of the Shazam Family are about to learn as they cross over into the Darklands, the Magiclands aren’t all fun and games! In a world filled with all kinds of frightful creatures and haunts, nothing will compare to the horrors of Billy’s own internalized fears.