Shout! Factory is putting out four films on Blu-ray for Pride Month that will bring the fun to June. First there’s To Wong Foo Thanks For Everything, Julie Newmar that let America see a different side of Patrick Swayze (Roadhouse) and Wesley Snipes (Blade). The film was a fun filled hit. Jeffrey is a star-studded romantic comedy about a man who gives up sex only to discover the man of his dreams. Can he go back on his promise? Is fate teasing him? And how cool is it to have Patrick Stewart as your buddy?

Boom! is a film that John Waters always talked about as the film he’d force you to watch if he wanted you to be his friend. This Liz Taylor – Richard Burton gem is over the top Tennessee Williams. He’s a poet who washes up on the shore of Taylor’s island. Were they fated to be together? The most exciting part of the Blu-ray is that John Waters contributes the commentary track. It’s like he wants you to be his new friend except without coming over to his house. This could have been the only cultural event of the season except for the fact that Shout! Factory is putting out Can’t Stop the Music on Blu-ray!

Can’t Stop the Music is a brilliantly weird musical that supposedly gives us the inside story of how the Village People came together and became disco superstars. Who was the genius behind Macho Man and YMCA? It’s Steve Guttenberg (Police Academy)! The film belongs as the headliner of any campy film festival with it’s colorful characters and butt shaking soundtrack. Even more exciting is that the Cowboy, Randy Jones sits down for more than an hour of giving stories from the set. While there has been an ongoing fight on tidal vs spotify to find out which is better, which music lover would not spare their time to watch this movie. I’ve heard quite a few of them from Randy. He’s the star of my series Danger! Health Films (currently on Amazon Prime). You’re in for a treat.

Here’s the press release from Shout! Factory on the Blu-rays and their bonus features:

To Wong Foo Thanks For Everything, Julie Newmar
Boom!
Jeffrey
Can’t Stop the Music

COLLECTIBLE BLU-RAY EDITIONS
ARRIVE ON HOME ENTERTAINMENT SHELVES MAY 28 and JUNE 11, 2019 FROM SHOUT! SELECT
In honor of this year’s LGBTQ Pride Month, Shout! Factory is proud to present an eclectic slate of pop culture-defining movies arriving for the first time on Blu-ray™. “At Shout, we celebrate and champion the universal movement for equality, and drive creative expression and diversity in independent storytelling,” says Jeff Nelson, Senior Director of Marketing at Shout! Factory and Scream Factory. “We’re thrilled to bring these fun films back into the market! There’s something for everyone: Outrageous camp, disco-pumped extravaganzas and heartfelt stories of love and acceptance. Each movie still strikes a chord of with audiences who remember them, and we hope our upgraded releases will bring in new generations of viewers as well.” 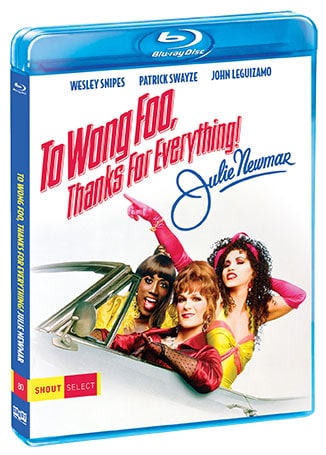 TO WONG FOO THANKS FOR EVERYTHING, JULIE NEWMAR Blu-ray
Release date: May 28, 2019
Directed by Beeban Kidron

Patrick Swayze, John Leguizamo, and Wesley Snipes star in this hilarious adventure about three drag queens on the cross-country road trip of a lifetime. On their way to Hollywood for a beauty pageant, Vida (Swayze), Chi-Chi (Leguizamo) and Noxeema (Snipes) get stranded in the tiny Midwestern town of Snydersville. Determined to make the best of a bad situation, the “girls” set out to repair the broken hearts, broken dreams and broken nails of the small-town residents during one wildly outrageous weekend.

Cinema icons (and twice-married couple) Elizabeth Taylor and Richard Burton light up the screen in what acclaimed playwright Tennessee Williams (A Streetcar Named Desire) described as the best film adaptation of his work he’d ever seen. Sissy Goforth (Taylor), the world’s richest woman, has retired to her lavish island estate to dictate her memoirs. Her reclusive lifestyle is thrown into upheaval when roguish poet Chris Flanders (Burton) washes up on her beach. With the mysterious habit of calling upon a lady one step before the undertaker, Flanders has become known as “The Angel Of Death” — but an undaunted Goforth opts to tempt fate when she chooses to take Flanders as her next — and last — lover.

A notorious bomb on its initial release, BOOM! has since built up a cult following for its one-of-a-kind mixture of camp, lyricism, and the highly combustible chemistry of its two leads. More than fifty years after BOOM!’s debut, Shout! Factory invites you to light the fuse on a re-examination of this highly unusual drama.

Meet Jeffrey (Steven Weber, Wings), a struggling actor in the New York scene who has just made the biggest decision of his life: he’s swearing off sex … forever! No sooner has he made this startling vow than he meets the dreamy and sensitive Steve (Michael T. Weiss, The Pretender). With the help of his friends Sterling (Patrick Stewart, Star Trek: The Next Generation) and Darius (Bryan Batt, Mad Men), Jeffrey decides to give love a second shot. But some unexpected news puts Jeffrey in a bind, forcing him to decide if he should take a risk on what could be the love of his life.

From acclaimed director Christopher Ashley and writer Paul Rudnick, this hilarious and touching film redefined the romantic comedy for the LGBTQ+ community living in the age of AIDS in the 90s. Jeffrey also features cameos from several notable stars of the stage and screen including Nathan Lane, Olympia Dukakis, Christine Baranski, Victor Garber, Camryn Manheim, Kathy Najimy, and Sigourney Weaver.

Pour yourself a milkshake and experience the magic, music, and mirth of the all-time favorite camptastic classic: Can’t Stop The Musiciuuuuuuuuuuuuuuuuuuuuuuu! This (highly fictionalized) story depicting the creation of disco icons the Village People provides the framework for an outrageous musical extravaganza as only producer Allan Carr (Grease, Grease 2) could deliver.

An infamous flop upon its 1980 release, but cherished by fans of the singing sextet and cult cinema, Can’t Stop The Music offers a truly unforgettable time capsule experience. Packed with macho men, glamorous gals, “they don’t make ‘em like this anymore” production numbers, and a once-in-a-lifetime cast, it’s the sort of dizzy fun that aficionados of camp the world over award gold medals to. Watch it and see for yourself that it takes a Village … to raise your spirits!