Squadron Supreme Of America Enter War Of The Realms! Plus Agent Phil Coulson Has A VERY Surprising Ally! (Legacy Avengers #718) 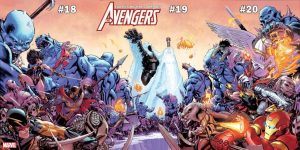 The book opens with a storyline catch-up and creators’ credits page.

…The Blur (The Flash) and Doctor Spectrum (Green Lantern).

Agent Phil Coulson has pulled them together and he needs them to protect the USA from the ravages of the War of the Realms.

We then pivot to some flashbacks to see how Coulson is pushing and training the team; more likel manipulation starting with Hyperion and Power Princess…

…Doctor Spectrum and the Blur.

Back in modern day, the Squadron Supreme of America has chased some of the War of the Realms threats into Ontario, Canada. They don’t follow because they are only the USA’s heroes and only protect ‘Murica.

Book ends with the revelation that Agent Phil Coulson return to the land of the living puts him in the debt of and possible thrall of Mephisto?!

Solid action, nice exposition, awesome revelations about the Squadron Supreme of America. AMAZING art. Very entertaining issue despite no Avengers in it anywhere. 9 out of 10.