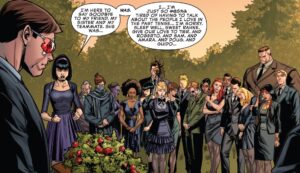 Cyclops Vs. Wolverine! Funeral For A Friend! Hate Crime Or Attempted Rape That Led To Murder? (Legacy Uncanny X-Men #636)

The book opens with a dramatis personae…

…followed by a storyline catch-up and creators’ credits page.

Cyclops attends the funeral for Rahne Sinclair aka Wolfsbane while Wolverine gets into his funeral wear and heads elsewhere with someone codenamed Nothing, an Asian Psylocke, while the Caucasian Psylocke aka Betsy Braddock is elsewhere.

As Cyclops grieves with X-Men past and present, Wolverine and Nothing approach a house…

…a frat house it seems or a house where a group of kids have gotten together to play. All, but four of the boys exit the house and…

…we learn about Rahne’s last moments.

These boys swarmed here and killed her; attempted rape or hate crime or both led to this sad outcome for the former New Mutant, X-Force member, X-Factor member and X-Man. These scenes have also kicked off a rabid online debate as the comic book’s scenes evoke trans panic attack to some.

He’s about to attack the now armed boys when the house is raided!

The book ends in X-Men HQ, the bar they frequent. Cyclops is upset that Wolverine didn’t make the funeral and tries to expel him from the team. In fact, Cyclops throws the first punch and he and Wolverine really go at it. In the midst of the fight…

…they are broken up by Juggernaut who focuses them on the task ahead, the list of villains for them to go after. He asks why Emma Frost isn’t on the list and we learn that Cyclops and the team doesn’t know who she is despite she being their one-time teammate and Cyclop’s one-time lover?!

So, naturally, Emma Frost and Mystique are back next issue!