Frank Sinatra made Palm Springs the destination for living in the late ’50s and ’60s. His presence in the desert oasis made it the place for the jet setters to relax when they weren’t throwing dice in Vegas or making deals in Los Angeles. Sinatra In Palm Springs – The Place He Called Home is a documentary that takes views out to this glamorous land to find out why so much happened here and why even now so many visit to take in the Coachella Festival. Here’s the press release from Shout! Factory: 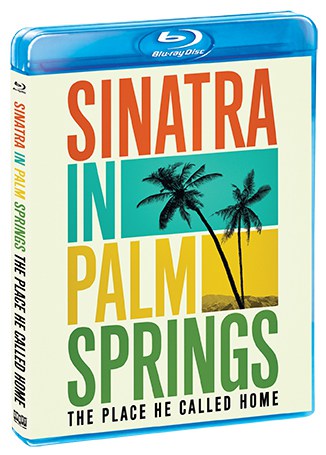 SINATRA IN PALM SPRINGS
﻿– THE PLACE HE CALLED HOME
COMING TO BLU-RAY™ AND DVD
FROM SHOUT! FACTORY ON JUNE 11

Los Angeles, CA – Palm Springs, a small desert oasis 100 miles east of Los Angeles, was Frank Sinatra’s true home for fifty years, as is illustrated in Sinatra in Palm Springs – The Place He Called Home, which is coming to Blu-ray™ and DVD from Shout! Factory on June 11, 2019, and is available now for pre-order.

During his brief yet turbulent marriage to Ava Gardner, Palm Springs was center stage. And for the rest of his life, the Rancho Mirage compound on Frank Sinatra Drive was the sanctuary he called “My Heaven.” Palm Springs still feels the ghost of the legendary performer.