The early ’70s had both Spaghetti Westerns and action films with black actors cramming up the not quite as prestigious theaters in America. Into this barrage of bullets arrived The Harder They Come from Jamaica. The film starred singer Jimmy Cliff in the kind movie Elvis should have made. The Reggae icon is a country guy who arrives in Kingston with a song in his heart. He dreams of big success and gets into the studio to record. But quickly realizes the producers are ripping. He ends up getting involved with the criminal underworld. The movie proved to be a major success as an action film and introducing real Reggae music to cinemas around the world. This August, The Harder They Come arrives on Blu-ray as part of Shout Select. Even more thrilling is that director Perry Henzell’s follow up film No Place Like Home is also part of the boxset. This brought together Grace Jones and PJ Soles (Rock and Roll High School). Here’s the press release from Shout! Factory: 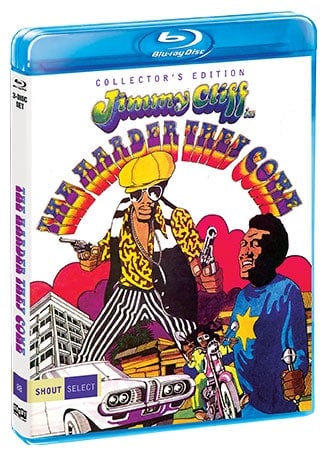 Los Angeles, CA – A beautifully restored version of The Harder They Come, starring reggae icon Jimmy Cliff, will be released August 20th in a 3-disc Collector’s Edition set by Shout Select, under license from the film’s longtime distributor, Xenon Pictures. The release marks the film’s debut on Blu-ray™ in the U.S., and featuring a new transfer from the original 16mm negative, the film has never been seen by the public in this way.

Also included is the first-ever home entertainment release of Perry Henzell’s long lost follow up feature, No Place Like Home, which had gone unfinished and was thought to have been lost, as well as Perry Henzell: A Filmmaker’s Odyssey, a new documentary about its genesis and restoration. The Harder They Come [Collector’s Edition] will also include a full slate of new bonus features, shot in Jamaica, to be announced at a later date.

Jimmy Cliff stars as Ivan Martin in 1972’s The Harder They Come, the first feature film to come out of Jamaica. An aspiring singer who leaves his rural village for the big city of Kingston, Ivan is hoping to make a name for himself. Robbed of his money and possessions on his first day in town, he finds work with a self-righteous preacher and an unscrupulous music mogul who exploits young hopefuls. In desperation, the simple country boy turns outlaw, at war with both the police and his rivals in the ganja trade. Ivan’s dream of stardom soon becomes a reality as he rises to the top of both the pop charts … and the most-wanted lists. Directed and produced by Jamaican Perry Henzell, and written by Henzell and Trevor D. Rhone, The Harder They Come also stars Janet Bartley, Carl Bradshaw, and Toots and The Maytals.

The Harder They Come [Collector’s Edition] also includes the first release of the rarely seen but much discussed film No Place Like Home, also directed by Henzell in the 1970’s. The film follows Susan, a producer from New York, visiting Jamaica to shoot a shampoo commercial. When the commercial’s actress disappears, Susan finds herself venturing further into the island, and drifting further from her real life. Starring Susan O’Meara, Countryman, Carl Bradshaw, and PJ Soles, in her debut film role, the 1973 film went unfinished, and was thought lost for 30 years. No Place Like Home also heralded the first time Jamaican singer Grace Jones was put on film. Henzell was able to lay out his thoughts for finishing the film prior to his death in 2006 and the film was shown as a work in progress at the 2006 Toronto International Film Festival. Accompanying the Blu-ray™ release is Perry Henzell: A Filmmaker’s Odyssey, a new documentary about the creation, restoration, and history of that film.

The Harder They Come and its soundtrack, a quintessential album for music fans, have been credited for bringing reggae to the United States when they dropped in 1973, along with The Wailers Catch A Fire, released in the States that same year. 46 years later its impact on the world can still be felt, and the film, and its follow up, can finally be viewed as they were meant to be.
About Shout! Factory