Archie and CW Riverdale Showrunner Grapples With How To Write Out Actor Luke Perry After His Sudden Death! Riverdale Season 3 Finale This Week! 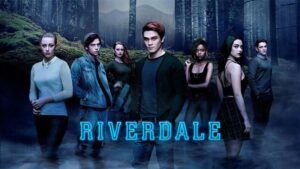 ‘Riverdale’ Boss on Writing Out Luke Perry: ‘We Didn’t Want to Get It Wrong’

As “Riverdale” prepares to close its third season next week, the show still has not fully addressed the passing of actor Luke Perry.

“That was a decision we made partly because when Luke passed it was such a shock, and we were so sad — we were so bereft — and we knew we had to address it some way, but we didn’t want to get it wrong,” showrunner Roberto Aguirre-Sacasa tells Variety.

The March 6 episode, the first back on air after Perry passed away from complications from a stroke earlier that week, posted an In Memoriam card, dedicating the episode to the actor, and the April 24 episode aired Perry’s final scene shot. A future episode referenced that his character, Fred Andrews, went out of town, and his son’s mother (played by Molly Ringwald) came into town to stay with him in Fred’s absence.

When Perry passed, Aguirre-Sacasa says, the “Riverdale” writers’ room had already written most of the season. “It felt like trying to squeeze this in would have been a disservice,” he continues.

But the show “absolutely” has plans to “honor Luke and explain what’s going on with Fred and why we haven’t seen him” at the start of the fourth season.

Ringwald, Aguirre-Sacasa says, has been an important part of this process. She was already confirmed to return to guest star in an end-of-the-season episode, he shares, when Luke passed, and she said, “Do you need me to stay? Do you need help?”
Aguirre-Sacasa told her it would be great if she could.

“We love Molly; we love having her on the show. I always say to Molly, ‘Come back as often as you want, whenever you want,’” he says. “We started to have conversations about [Molly] having a bigger presence on the show next season.”

Although “Riverdale” will have to say goodbye to one of the quintessential parents on the show in its fourth season, Aguirre-Sacasa doesn’t anticipate that changing the balance of the storytelling in a bigger sense.

“We love the parents on our show; we love those actors,” he says. They really dimensionalize and fill out the world of our show. I think the plan is to maybe even tell more stories with them.”