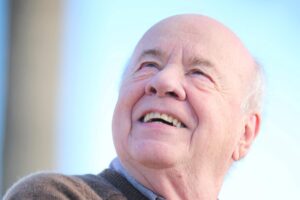 Tim Conway, the agile comedian who was a core member of the “The Carol Burnett Show” troupe and starred in a string of Disney film comedies in the 1970s, died Tuesday morning in Los Angeles. He was 85.

A rep for Conway tells Variety he died from water on the brain.

Over his long career, Conway was nominated for 13 Emmys and won six. For “The Carol Burnett Show,” he was nominated six times as a supporting performer in a variety or comedy series, winning in 1973, 1977 and 1978. He was also nominated as part of the writing staff for the show, drawing three nominations and winning in 1978. In addition to those four Emmy wins, he won in 1996 for outstanding guest actor in a comedy, “Coach,” and in 2008 for guest actor in a comedy for “30 Rock.”

“I’m heartbroken. He was one in a million, not only as a brilliant comedian but as a loving human being,” said Burnett in a statement obtained by Variety. “I cherish the times we had together both on the screen and off. He’ll be in my heart forever.”

On “The Carol Burnett Show,” Conway was so side-splittingly hilarious that he often caused co-star Harvey Korman to begin laughing in the middle of a skit. He was known for ad-libbing bits that would challenge Korman and other co-stars including Vicki Lawrence and Lyle Waggoner.

“Hysterical, crazy, bold, fearless, humble, kind, adorable… all synonyms for Tim Conway,” said Lawrence in a statement. “I am so lucky to ever have shared a stage with him. Harvey and Tim are together again…the angels are laughing out loud tonight.”

Conway appeared as many characters on the show, but the two most famous were the Old Man and Mr. Tudball. The Old Man shuffled along at an agonizingly slow pace vastly insufficient to the occupations in which the show’s writers would place him. His inability to get things done usually resulted in slapstick, and Conway would ad lib a good deal.

Mr. Tudball was a businessman who aimed to run a “ship-shape” office, but such intentions would always go unfulfilled because of the bored indifference of his secretary, Mrs. Wiggins (Burnett). The character was widely thought to be Swedish, but Conway actually imitated the accent of his Romanian mother.

“Carol Burnett” ran for 11 seasons on CBS from 1967-78. Conway appeared on a single episode in 1967 and then became a regular member of the comedienne’s troupe from 1975 until the show’s end…

…Conway was married to Mary Anne Dalton from 1961 until their divorce in 1978.

He is survived by second wife Charlene Conway, whom he married in 1984, and his step-daughter Jackie Beatty, as well as six children by Dalton, including KFI Los Angeles radio host Tim Conway Jr.

More on the illustrious career of Tim Conway over at Variety.

On behalf of the IP team, I offer our condolences the family, friends and fans of Tim Conway.