Clark Gregg has a brand new team on Marvel’s Agents of S.H.I.E.L.D. — and EW has an exclusive new look at them below.

In the ABC super-show’s sixth season premiere, viewers met Sarge, Clark Gregg’s mysterious new character who arrived on Earth via some kind of museum-destroying breach and appears to be S.H.I.E.L.D.’s new foe. Although he’s a dead ringer for the dearly departed Phil Coulson, he’s nothing like him: he knows nothing about the security organization and killed an agent before driving off in a huge truck.

Sarge wasn’t alone, though, as the season opener also introduced us to his dangerous team of travelers: Snowflake (12 Monkeys’ Brooke Williams), the group’s unhinged wildcard; Jaco (Happy Together‘s Winston James Francis), an intimidating wall of strength and the muscle of the bunch; and Pax (Project Blue Book‘s Matt O’Leary), who is squirrelly, a little on-edge, and the newest member of the group.

Check out a fresh new image of Sarge and his team below: 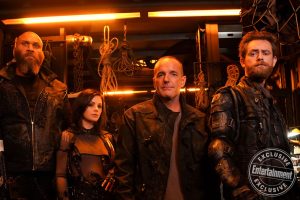 “He seems to be on a mission,” Gregg previously told EW about his mysterious new character’s purpose. “It’s not clear what’s involved, but they’re hunting something, and they don’t care who or what they have to kill to find whatever they’re hunting. He’s the anti-Coulson in that way. Phil Coulson was never comfortable much with collateral [damage]. This guy, as the kids say, he has no sh—s to give.”

Even though Gregg couldn’t reveal exactly what Sarge and his team want, he did tease that they’re “after something more subtle in the sci-fi realm.” We’ll wait to wait to find out more as the season progresses.

This series has gotten better every season.

Ryoma! The Prince of Tennis serves up on Blu-ray in July