CBS has renewed “NCIS: Los Angeles” for an 11th season, and “NCIS: New Orleans” for a sixth season.

Both action drama are spinoffs of “NCIS,” which was renewed in early April. “NCIS: Los Angeles” follows a Naval Criminal Investigative Service division based in the City of Angels that is tasked with catching dangerous and elusive criminals who pose a threat to national security. It stars Chris O’Donnell as Special Agent G. Callen, a chameleon who can skillfully blend in with and infiltrate the criminal underworld, and LL Cool J as Special Agent Sam Hanna, a former U.S. Navy SEAL who has seen action in Afghanistan and Iraq.

“NCIS: New Orleans” centers on the field office in the Big Easy that investigates criminal cases involving military personnel in the area. Leading the team is Special Agent Dwayne Pride (Scott Bakula) a.k.a. “King,” a native of New Orleans who is driven by his need to do what is right. The agents on his squad are played by Lucas Black, Vanessa Ferlito, Necar Zadegan, Rob Kerkovich, Daryl “Chill” Mitchell, and CCH Pounder.

The show was created by Gary Glasberg, and executive produced by Christopher Silber, James Hayman, Adam Targum, Chad Gomez Creasey, and Mark Harmon. It is produced by CBS Television Studios.

“Both shows have been key pillars to the CBS schedule for several years,” said Kelly Kahl, the president of CBS Entertainment. “They offer heroic stories, big stars and have attracted a passionate, loyal fan base. We’re excited to have Chris, LL, Scott and these terrific casts back to bring more terrific NCIS stories to viewers in the U.S. and around the world.”

Not unexpected; this follows news of the NCIS flagship show being renewed by CBS for Season 17. 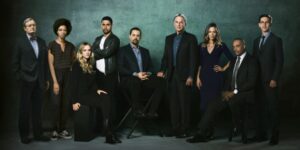 NCIS fans, of all types, enjoy!