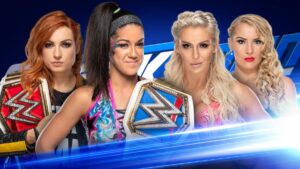 WWE amended its preview / teaser for tonight’s Smackdown Live with a few new matches including the below!

Lynch will surely be out for payback on The Queen for taking her SmackDown Women’s Title and on The Sassy Southern Belle for interfering in the match. What will happen in this highly combustible tag team throwdown?

Carmella to clash with Mandy Rose

The bad blood between Carmella and Mandy Rose won’t just be contained to the Women’s Money in the Bank Ladder Match, as the two will collide tonight on SmackDown LIVE.

The tensions between the two began during the Ladder Match when The Golden Goddess attacked Carmella, seemingly forcing The Princess of Staten Island out of the match with a knee injury. However, Carmella refused to stay down, as she returned to the battle and went right after Mandy.

With nobody else in the way, what will happen when these two rivals do battle in the squared circle?