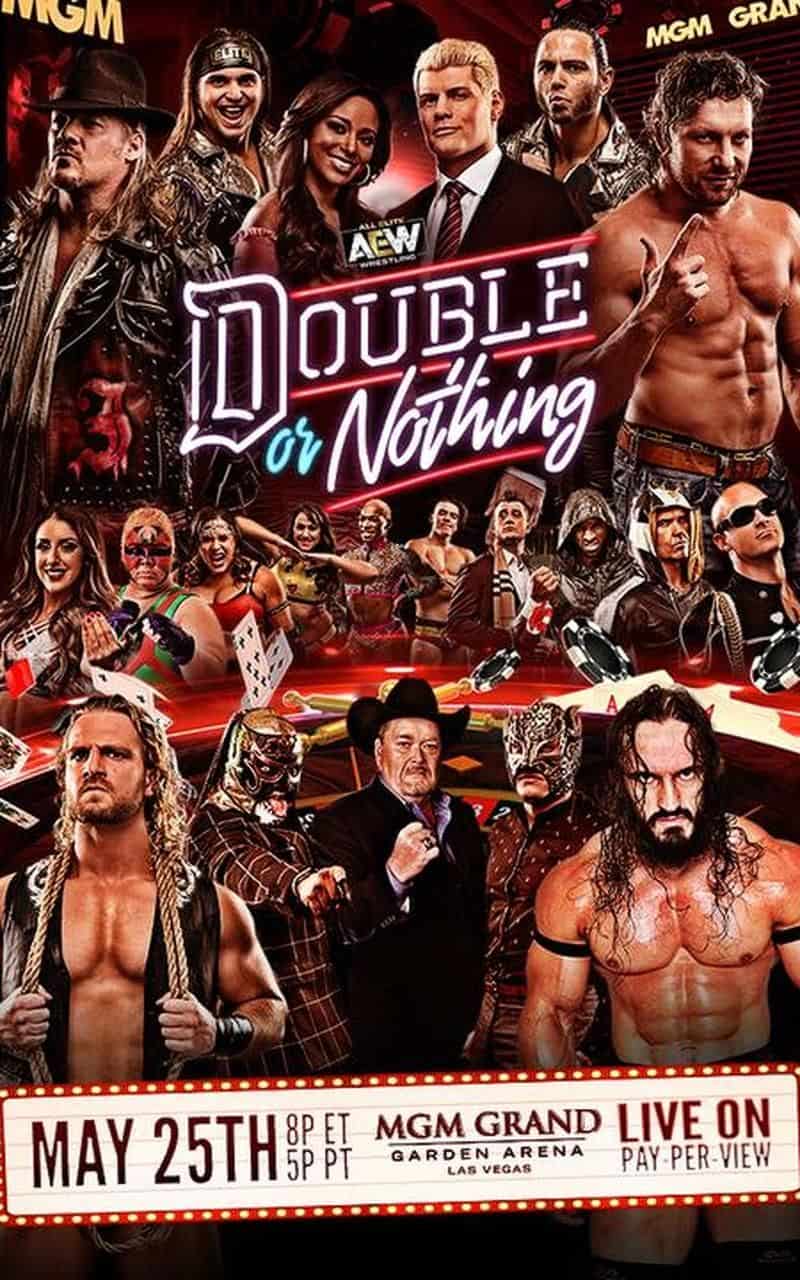 Thanks to the glory that is PPV online (yes, I paid for this), I managed to catch the first PPV from All Elite Wrestling. And I am cheating with the 10 thoughts concept. Without further ado, 10 (plus) thoughts on the first PPV from the latest wrestling promotion!

1) The pre-show starts with a Casino (Battle) Royale. Yeah. A battle royal with convoluted rules and involving a guy who covers himself with baby oil and another who lit a cigarette mid-ring… Look, it was not terrible, especially seeing a sumo guy hit a tope suicida, and we did see Billy Gunn, Glacier, Brian Pillman Jr and Tommy Dreamer (who introduced trashcans… of course), so it popped the crowd nicely. Not terrible, not great, more meh, and I don’t know if I would have started things with this. After quarter of an hour, Adam Page wins by last eliminating MJF.

(1a. The librarian gimmick sucks. I mean, that was terrible…)

2) After 10 minutes Kip Sabian defeated Sammy Guevara in what was a decent little match that would not have felt out of place in the old TNA’s X-Division or mid-90s WCW’s cruiserweight division. Some nice moves (highlight – Guevara’s shooting star press from the apron to guillotine Sabian who was draped over the barricade), but it had no real flow, all spots and limited selling. Still, fun match.

(2a. Excalibur is fine on commentary, Alex Marvez sounds like he might have been trying too hard.)

(2b. Cody Rhodes et al. making fun of inflated PPV numbers was actually funny; the fact is, this is a full house of around 13,000 and the crowd is HOT.)

3) The PPV proper starts with a 6-man tag… and holy crap! After some teething issues at the start, they hit their groove and this was one hard hitting highlight reel. Some of the double and triple team moves were incredible, and the old favourite moves were pulled out. So good to see Daniels and Kazarian again, and the team of SCU (Southern California Uncensored: Daniels/Kazarian/Scorpio Sky) defeated – just – the Stronghearts team from OWE (Cima/T-Hawk/El Lindaman). I think my highlight was Kazarian’s double pin using a submission and a northern lights suplex at the same time. It is explained that in AEW there is a 10-count rule after tags, and this was used to its fullest here.

(3a. I’ve missed good ol’ JR on commentary. And commentators who know when to shut up.)

4) What was supposed to be a three-way dance between women Dr Britt Baker, Nyla Rose and Kylie Rae turned into a 4-way with the inclusion of Awesome Kong (accompanied by Brandi Rhodes). This is where WWE has spoiled us. The match was a good match, but after the WM35 main event and other matches the WWE women have delivered, this felt a little lacking. Highlight: Awesome Kong hitting a tower of doom spot. Still, a good match is a good match and Dr Britt Baker won after 10 minutes by pinning Kylie Rae after Rose took herself and Kong out with an outside spear to the steps.

5) The Best Friends (Trent Beretta & Chuck Taylor) were up against Angelico and Jack Evans. Started slow and slightly awkward, but soon picked up and became another good match. But it was a little bit X-Division-y, in that the selling of moves that should have killed some-one lasted all of ten seconds before they shrugged it off. There were so many awesome moves being hit, it was like they were trying to make a highlight tape. But, damn, if it wasn’t fun! Yeah, so sue me – I liked it. And that crowd pop for the hug! Jack Evans does the 630 better than anyone. After more than 10 minutes Beretta pinned Evans after a tag team crusher. Some of those double team moves were amazing. Colour me impressed.

(5a. Post-match, there’s a show of mutual respect, lights go out, then the Super Smash Brothers are there and their minions come out and attack and leave all four lying. Not overdone, and it made its point.)

6) Riho, Ryo Mizunami & Hikaru Shida battled Yuka Sakazaki, Emi Sakura & Aja Kong in a six-woman tag-team match. All-Japanese match and… holy crap! Look, they had their characters and played them to the hilt, but their moves were clean and they hit damn hard. Aja Kong can kick! I also liked the female ref. The bell rang early, but the ref kept it going quickly. Nice work. Ending came when Shida pinned Sakura after Aja accidentally hit her team-mate. More than 10 minutes of goodness.

7) I admit it – I thought this match would be meh. Cody v Dustin, the Rhodes brothers collide. Dustin’s older than me, Cody tended to be underwhelming, and I was sort of… meh. But they had the best video package I’ve seen in ages to introduce their match, with perfect music. Even got me a little pumped, but, you know… meh. However… Oh. My. God. To think we could have been having this for the past 10 years!? Cody comes out with Brandi and destroys a throne with a sledgehammer (ooh… subtle!), Dustin has half his face painted, the crowd is off the charts before they even lock up. This was a GREAT match! They told a story… It was not a spot-fest, fast-paced, but it was them knowing one another and countering each other. Earl Hebner is the ref!? And then Brandi got involved and DDP(!) carried her out. Dustin bleeds, they go back and forth, they counter one another… Dusty would have been proud. Dustin doesn’t just bleed; to quote JR: “He’s sweating blood!” There is blood everywhere. It pours out of Dustin. SHIT. And Dustin will not stay down. Look, this was old fashioned wrestling, the way I like it. In the end, Cody wins after around 25 minutes. Words cannot do it justice. HOLY SHIT! Then, after it was all over, Cody says he doesn’t want Dustin to retire, but he wants him as a brother, to tag with him. They hug – the crowd erupts!

(7a. This was the first match of the night with blood. Blood helped make the match intense. It was not over-used in the show – this is the perfect use of colour. Bravo, AEW.)

(7b. Jack Whitehall is here! One of the best young UK comedians going today. And Bret Hart brings the AEW Title belt to the ring! WTF?! Oh, nice segment to let people calm down after that match. Excellent booking, AEW.)

8) Following that we have the only championship match for the night – the AAA tag team title match between champions The Young Bucks (Matt & Nick Jackson) against The Lucha Brothers (Pentagon Jr & Rey Fenix). I wondered how in the hell they could follow the Rhodes brothers. Well, they did by putting on a completely different match, a modern tag-team wrestling clinic. Just awesome. The double team moves were amazing, from both teams. After 25 minutes, the Young Bucks retained, but – wow! – this was a match to catch. Two brilliant matches in a row.

(8a. It looks like AEW is going to put a renewed focus on tag team wrestling. I hope so. If it’s anything like the stuff we’ve seen tonight, it is going to be well worth it.)

9) Chris Jericho (with entrance riffing on some of his earlier incarnations) against Kenny Omega is the main event, and this has a lot to live up to. It didn’t quite get there, which was unfortunate, because in itself, it was a great match, and would have stolen the show at any other PPV I’ve seen this year. Taking it as it stands, great match, back and forth, telling the story of the two of them having fought one another recently, so this time knowing one another and working around the fact last time they had no DQ. Back and forth and just hard-hitting, over and over, with hardway blood. Incredible match. Realistically, the last 3 matches on the card were easily amongst the best PPV matches I have seen in a long time. Jericho won after almost half an hour and looks dead. He still gets on the mic and cuts a damn fine heel promo, taking credit for everything.

(9a. After it was all over, Jon Moxley – Dean Ambrose in WWE – comes in through the crowd and DDTs Jericho, then DDTs the ref… then he tries to do it to Omega and Omega drives him out and they fight into the crowd until Omega is DDTed on top of a casino prop and thrown to the ground! Holy Shit!)

10) Okay… here’s the deal. On the main card there was not a bad match. In fact, there were some incredible matches. (MOTN – the Rhodes brothers… and I never thought I’d say that.) This was a PPV that was well worth catching. I hope they have not peaked too early and that this is the start of something incredible. No stupid story-lines, good in-ring action, JR on commentary, good veterans, great up-and-comers… they did it. I’m hooked. Shows like this make me regret retiring from the ring…

As usual, comments are more than welcome. Where did I go wrong, what did I exaggerate, what did I muck up? Sound off below!