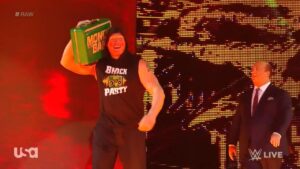 A wonderful memorial day video airs paying tribute to the fallen. Kofi comes out and says he wants to be one of the best WWE Champions ever, and he can only do that by beating Brock Lesnar. Seth wants Brock to cash in on him and then Brock comes out with the MITB case modified to look like a boom box with him playing more beats. Brock hops along to New Day’s theme and then Heyman plays air guitar to Seth’s theme while Brock glowers and then Heyman and Brock leave with no decision being made. Dolph jumps Kofi and beats up Xavier, drawing blood. He says that in 11 days, he’ll get the belt.

Miz, Braun, Lashley, and Corbin have a fatal 4 way elimination match to determine Seth’s challenger at Super Showdown. A block party is held with Nattie’s birthday being celebrated and EC3 looking annoyed. A long HHH vs. Orton video airs. Shane faces Roman’s cousin and Drew demolishes him before. Shane makes him tap to the triangle and then Roman beats up Drew and goes after Shane. Brock and Heyman come back out and go to announce the date before Seth comes down and Heyman reads the contract – with Brock not knowing he had a year and getting mad and then getting happy because he has a whole year to pick.

Truth comes down and Drake’s flyers go sky-high and then Truth escapes. AJ talks about being replaced by Corbin tonight and he had a pop in his elbow at the PPV and then Corbin attacks him. The IIconics graphic shows them as Raw women’s tag champs and Becky takes out Peyton with the manhandle slam – her pumphandle uranage. Billie thankfully takes very few bumps and then Lacey comes down. Usos and Revival argue at the party. Ricochet and Cesaro have another very good match. Ricochet spikes him on a code red that almost becomes a destroyer for 2.9. A snap rana gives Ricochet a sorta-fluke win.

Cole says that next week on Raw, Rey will give up the title because he was hurt by Joe. Joe says Rey will have to give him what’s rightfully his. Okay then. The Usos dance and then we get some weird back and forth videos from Miz and Braun. Miz is beaten up by all the heels and then Strowman and Lashley brawl in the crowd for a double countout. End of Days takes out Miz. Truth and the geeks are at the block party and Truth escapes.

Bray says he can be anything he wants to be. Sami does a Q and A and buries Becky Lynch and brings up AEW and gets an AEW chant. He’s asked about Seth and takes shots at him, naturally leading to a match. This is the main event for some reason and it’s Sami’s best match since returning. He puts in a good showing, but loses to the stomp.