The heat of summer has arrived early in parts of the country. Sure this is perfect weather outside if you’re a strip of thick cut bacon. But what if you’re looking for something to do in June that doesn’t involve leaving the sofa near the air conditioning vent? Well Arrow Video is ready to keep you inside with a variety of Blu-ray treats.

American Horror Project Volume 2 is an obscure frightfest in a boxset. The curated collection includes new transfers of Dream No Evil, Dark August and The Child. Odds are you haven’t a clue about them. But trust Stephen Thrower that he’s put together a triple feature that will chill your bones. Trapped Alive is another fearsome entry about a jail break, a carjacking and a cannibal in the bottom of a mine shaft. Cameron Mitchell (Blood and Black Lace) is in the middle of this mix.

Double Face is a cool night of Giallo and Gelato with a tale of a man looking for the wife he could never understand after a whirlwind courtship. Klaus Kinski discovers his rich wife is bisexual which was pretty shocking back in 1969. Before he can come to terms with it all, she dies in a car wreck. Or did she? This was directed by Riccardo Freda who was also behind The Iguana with the Tongue of Fire. Double Face has a less confusing ending. The Running Man is not the Arnold Schwarzenegger movie. This is by Carol Reed (The Third Man) about a insurance fraud scheme that goes bad. Laurence Harvey (The Manchurian Candidate) fakes his death and plans a new life with his wife. Except the pesky insurance investigator is on his trail.

Here’s the press release from Arrow Video about all the releases:

With summer beating down the door the temperature outside isn’t the only thing sizzling. Arrow is bringing their own heatwave this June with five new titles sure to satisfy the most devoted of cinephiles. Grab your favorite summer drink, jack up the A/C and get nice and cozy with your couch, you’re going to be sitting there a while.

Leading the way this month is the June 25th release of the highly anticipated American Horror Project Volume 2. The American Horror Project, co-curated with the help of author Stephen Thrower, is Arrow’s mission to dig deep into the depth of American genre cinema and unearth some lesser known masterpieces. Each volume selects three films that have gone under the radar, gives them gorgeous 2K restorations, and loads them up with enough special features to keep you busy hours after the films have ended. Volume 2 includes Dream No Evil, a surrealistic horror film about a woman that becomes mad in attempt to find her father and gets lost in a dark fantasy world; Dark August, a tale of a cursed man that seeks out the assistance of a spiritualist; and finally The Child, the story of an 11-year-old girl that is able to use supernatural abilities to raise the dead.

Coming to Blu-ray on June 4th is Trapped Alive, featuring genre favorite Cameron Mitchell. This late ’80s horror effort finds a group of people trapped in a mine shaft where a cannibalistic mutant hunts them for food. This new Arrow release comes with a brand new 2K restoration from the original camera negative, 3 brand new audio commentary tracks, a brand new making-of documentary and more. Also hitting shelves on June 4th is Michael Crichton’s sci-fi classic, The Andromeda Strain. Nominated for 2 Academy Awards and hailed by Roger Ebert as “splendid entertainment,” this film from director Robert Wise has been entertaining audiences for decades. With new 4K restoration from the original camera negative and a spaceship-load worth of special features, it’s sure to entertain for decades to come.

Carol Reed’s 1963 thriller The Running Man comes home on June 18th sporting a new 2K restoration courtesy of Sony Pictures. A man frustrated by his insurance company fakes his own death in order to cash in on the claim. Things seem to be going smoothly until an investigator begins snooping around. Making its official home video premiere, The Running Man comes with a variety of special features.

Closing out the month is the June 25th release of Double Face. This late ’60s Italian thriller from director Riccardo Freda stars Klaus Kinski as a millionaire unwittingly led into murder by his lesbian wife. Praised by Mondo Digital as “a sumptuous time capsule,” Double Face blends genres and is a must-own for both fans of the German krimi and the Italian giallo. 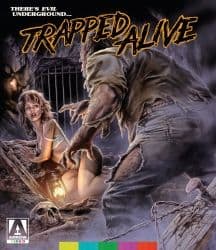 Trapped Alive
Genre regular Cameron Mitchell (The Toolbox Murders, From a Whisper to a Scream) stars in this thrilling tale of escaped hoodlums and underground-dwelling cannibals from director Leszek Burzynski and Hellraiser producer Christopher Webster. One wintry night, pals Robin and Monica are making their way to a Christmas party when they’re carjacked by a gang of crooks recently escaped from the local penitentiary. With the two young women taken as hostages, things take an even darker turn when their vehicle plummets down an abandoned mine shaft, trapping them underground with the dangerous crooks – and a mutant cannibal. Filmed in 1988 under the title of Forever Mine but not released until 1993, Trapped Alive was the first film to come out of Wisconsin’s now-defunct Windsor Lake Studios, which would go on to produce a number of films under the Fangoria Films label in the early-90s, including 1992’s Bruce Campbell-starring Mindwarp. 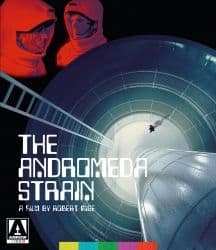 The Andromeda Strain
Before he created Westworld and Jurassic Park, Michael Crichton first blurred the line between science fiction and science fact with his breakout success The Andromeda Strain. Two years after the novel’s publication, Robert Wise (The Haunting) directed the film adaptation, a nail-biting blend of clinically-realised docudrama and astonishing sci-fi visuals that ushered in a new subgenre: the “killer virus” biological thriller. A government satellite crashes outside a small town in New Mexico – and within minutes, every inhabitant of the town is dead, except for a crying baby and an elderly derelict. The satellite and the two survivors are sent to Wildfire, a top-secret underground laboratory equipped with a nuclear self-destruct mechanism to prevent the spread of infection in case of an outbreak. Realizing that the satellite brought back a lethal organism from another world, a team of government scientists race against the clock to understand the extraterrestrial virus – codenamed “Andromeda” – before it can wipe out all life on the planet. Aided by innovative visual effects by Douglas Trumbull (2001: A Space Odyssey, Silent Running) and an unforgettable avant-garde electronic music score by Gil Melle (The Sentinel), Wise’s suspense classic still haunts to this day, and is presented here in a stunning, exclusive new restoration from the original negative. 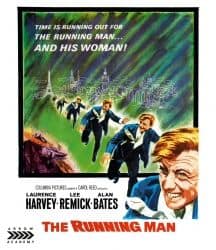 The Running Man
Over a decade after re-defining the thriller with The Third Man, director Carol Reed returned to the genre with The Running Man. Reuniting with that film’s cinematographer Robert Krasker (BAFTA-nominated for his work here), Reed goes in the opposite direction visually, framing the twisty plot in sun-kissed widescreen color. Rex Black (Laurence Harvey, Walk On The Wild Side) has successfully faked his death in a plane crash and escaped to sunny Málaga under a new identity, waiting for his wife Stella (Lee Remick, Anatomy Of A Murder) to arrive with £50,000 of life insurance money. It’s the start of a blissful, trouble-free new life for the couple – until Stephen (Alan Bates, Gosford Park), the insurance agent in charge of investigating Rex’s death, suddenly arrives in town. Is he just holidaying in Spain, as he claims, or is he on assignment to foil Rex’s scheme? Adapted by John Mortimer (later the creator of Rumpole of the Bailey) from the novel The Ballad of the Running Man by Shelley Smith, this underappreciated entry in Reed’s celebrated oeuvre makes its official worldwide home video premiere, complete with insightful new bonus features. 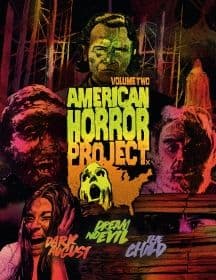 American Horror Project Volume 2 [Limited Edition]
Continuing its mission to unearth the very best in weird and wonderful horror obscura from the golden age of US independent genre moviemaking, Arrow Video is proud to present the long-awaited second volume in its American Horror Project series co-curated by author Stephen Thrower (Nightmare USA: The Untold Story of the Exploitation Independents). Starting off with a little-seen 1970 offering from underrated cult auteur John Hayes (Grave of the Vampire, Garden of the Dead), Dream No Evil is a haunting, moving tale of a young woman’s desperate quest to be reunited with her long-lost father – only to find herself drawn into a fantasyland of homicidal madness. Meanwhile, 1976’s Dark August stars Academy Award-winner Kim Hunter (A Streetcar Named Desire) in a story of a man pursued by a terrifying and deadly curse in the wake of a hit-and-run accident. Lastly, 1977’s Harry Novak-produced The Child is a gloriously delirious slice of horror mayhem in which a young girl raises an army of the dead against the people she holds responsible for her mother’s death. With all three films having been newly remastered from the best surviving film elements and appearing here for the first time ever on Blu-ray, alongside a wealth of supplementary material, American Horror Project Volume Two offers up yet another fascinating and blood-chilling foray into the deepest, darkest corners of stars-and-stripes terror. 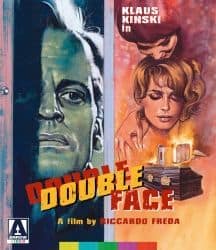 Double Face
In the post-war years, the proliferation of transnational European co-productions gave rise to a cross-pollination of genres, with the same films sold in different markets as belonging to different movements. Among these, Riccardo Freda (I vampiri, The Horrible Dr. Hichock)’s Double Face was marketed in West Germany as an Edgar Wallace ‘krimi’, while in Italy it was sold as a giallo in the tradition of Mario Bava’s Blood and Black Lace, combining elements from both genres for a unique and unforgettable viewing experience. When wealthy businessman John Alexander (the legendary Klaus Kinski, giving an atypically restrained performance)’s unfaithful wife Helen (Margaret Lee, Circus of Fear) dies in a car crash, it initially looks like a freak accident. However, the plot thickens when evidence arises suggesting that the car was tampered with prior to the crash. And John’s entire perception of reality is thrown into doubt when he discovers a recently-shot pornographic movie which appears to feature Helen – suggesting that she is in fact alive and playing an elaborate mind game on him… Psychological, psychedelic, and at times just plain psychotic, Double Face stands as one of the most engaging and enjoyable films in Freda’s lengthy and diverse career – a densely-plotted, visually-stunning giallo that evokes much of the same ambience of paranoia and decadence as such classics of the genre as One on Top of the Other and A Lizard in a Woman’s Skin.
BLU-RAY
SRP: 39.95
Street Date: 06/25/19
Genre: Mystery/Thriller
Language: Italian
Run Time: 91 mins