…Wally West The Flash, Superman and The Metaverse?!

The book includes Doctor Manhattan of the Watchmen infamy going back to April 18, 1938, to Superman’s debut in Action Comics #1.

A debut that sparked the debut of other Mystery Men…

…The Flash, Hawkman, The Atom, Doctor Fate, The Sandman, The Spectre and Hourman, leading to November 1, 1940…

…the debut of the Justice Society of America (JSA) in All-Star Comics #3? Interestingly, they want Superman as a member, and Batman and secretary Wonder Woman aren’t here yet. However…

…in the midst of the team wanting Superman in the JSA, in mid-sentence, mid-thought, they forget about Superman.

Then Superman’s origin is pushed to 1986.

This reboots of Superman’s origin, that impact this whole Earth, confound Doctor Manhattan. 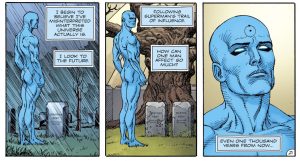 Doctor Manhattan stands at the grave of Superman’s parent and then parents are different points of his various origin reboots. Superman not only impacts the past and the Justice Society, but also the future and…

…but the Metaverse fights back and Wally West the Flash confronts Doctor Manhattan before DC Universe Rebirth #1.

The Rebirth is the Metaverse’s way of fixing Doctor Manhattan’s machinations? The book ends with Doctor Manhattan seeing into the future and his inevitable confrontation with Superman, but for some reason he can’t tell who wins; there is darkness.

Superman awakes in modern day as we prepare for Doomsday Clock #11, the next issue, and penultimate chapter of this event series.

A walk through DC Comics’ rich history and how it clashes with the Watchmen’s sensibilities. A bit high brow at times, but entertaining. Gorgeous art. 8 out of 10.