Star Trek: Deep Space Nine dared to mess a bit with the Star Trek formula. Instead of a crew on a spaceship named The Enterprise as done for the original series, the feature films and The Next Generation, viewers would be taken to a space station. The series was a hit when it debuted in 1993 and lasted seven seasons. What We Left Behind: Looking Back at Star Trek: Deep Space Nine is documentary that digs deep into the show and its impact. The documentary is coming out in August with plenty of bonus features for fans of the series. Here’s the press release from Shout! Factory: 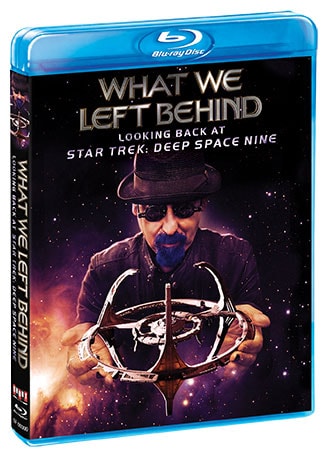 What We Left Behind: Looking Back at Star Trek: Deep Space Nine

From directors Ira Steven Behr (Star Trek: Deep Space Nine showrunner) and David Zappone (producer of For the Love of Spock, The Captains) comes the critically acclaimed documentary feature What We Left Behind: Looking Back at Star Trek: Deep Space Nine. A fascinating in-depth look at the past, present and future of a series whose dark, edgy take on Gene Roddenberry’s vision was often misunderstood when it premiered but has grown into a beloved mainstay in the Star Trek franchise, What We Left Behind will be available August 6, 2019 on Blu-ray, DVD, and Digital, as well as a Shout! Factory exclusive two-disc Special Edition Blu-ray.

Featuring extensive new interviews with the cast and crew of Star Trek: Deep Space Nine as well as newly remastered HD footage from the television series, What We Left Behind also focuses on the original writers of the series as they craft a brand-new episode of Star Trek: Deep Space Nine, developing what would be the eighth-season premiere if the show were to return to the air today.

Both the Blu-ray and the DVD of What We Left Behind: Looking Back at Star Trek: Deep Space Nine come loaded with nearly ninety minutes of bonus features, including over a dozen deleted scenes, behind-the-scenes featurettes with the cast and crew, a discussion of the HD restoration process with the producers, and more! The Special Edition Blu-ray also includes the featurette A Musical Reunion with Composers Dennis McCarthy and Kevin Kiner, as well as a 50-minute roundtable discussion with directors Ira Steven Behr, David Zappone, and the film’s producers that provides audiences with a comprehensive look at the making of the film, the show’s fans and the series’ ongoing appeal to Trekkers of all ages. Fans can pre-order their copies now by visiting ShoutFactory.com