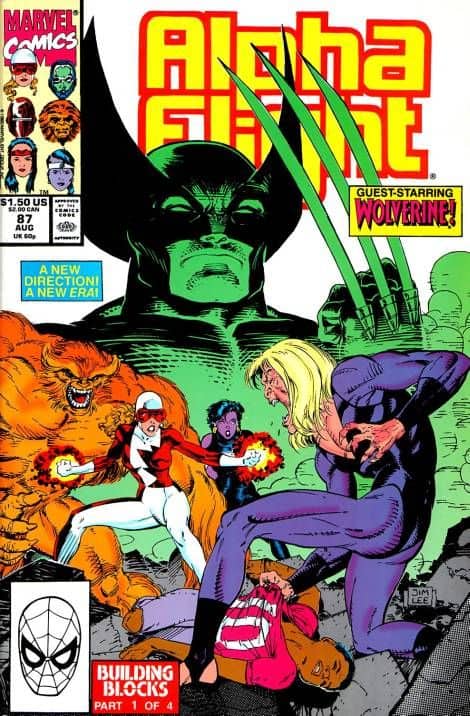 Spoilers (from twenty-eight to twenty-nine years ago)

After James Hudnall’s run ended, Alpha Flight took a big swerve under its new writer, Fabian Nicieza.  From what I remember, he re-established the team as Canada’s central force, returned them to a form of bureaucracy we don’t often see in American teams, and changed up the cast.  He brought back a long-dead character (which I always saw as a cop-out), added some new, non-Canadian ones, and tied the comic strongly to the American Marvel Universe. I remember him being joined by Michael Bair, whose art I’ve equally liked and found a little boring, but I also recall that Bair had a lot of guest artists.   This run brought Alpha squarely into the 90s, which you may recall is not often a good thing. I don’t really remember loving this run past Nicieza’s first four issues, but maybe my mind will have changed. 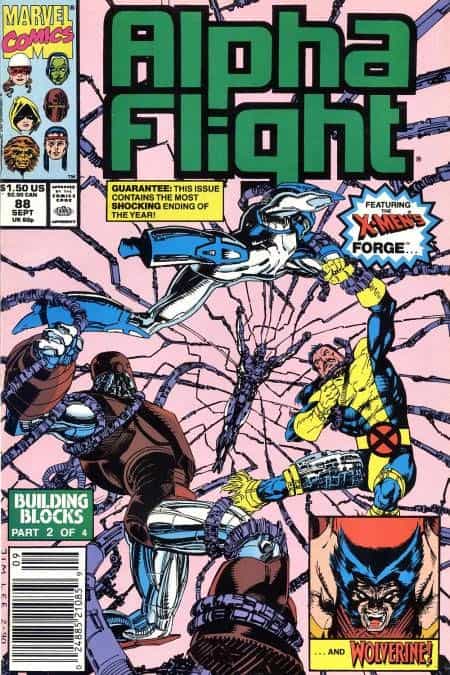 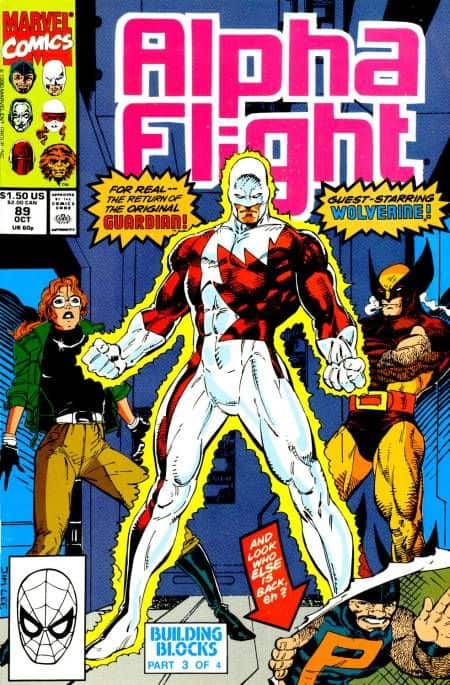 Nicieza was only on this book for about a year, and spent much of that time setting up a complicated team structure that he then basically erased by tossing most of the secondary characters away to another dimension.  I don’t really understand the thinking behind that, unless it was one of the many indefensible editorial mandates that took over Marvel in the early 90s.

I liked the way Department H was designed to be more than a superhero agency, and would have liked to see further exploration of how team member’s dual commitments to Alpha and Gamma Flights might have played out, story-wise.  I was also curious to see how Shaman managed as the Beta Flight instructor, especially since he was still being portrayed as an aloof and mostly heartless character, a big shift from his earliest John Byrne-written appearances.

The thing I really don’t understand about this run is why Nicieza would bring Mac back just to kill him off within the year.  His return to the book wasn’t as dramatic as it should have been, nor did the few pages given over to his relationship to Heather land very well.  It felt like it was obligatory, but not something that Nicieza cared about. The same can be said for the subplot that had General Clarke wanting Mac to replace Heather as team leader.  I also found it very confusing that Heather and Mac swapped superhero codenames – it must have been very confusing for the other Alphans.

Character development was largely lacking during this run.  The character that probably got the most was Diamond Lil, and her cancer story was one of the few places where I found it possible to relate or even care about a person in this book.  Aurora got some decent character work as well, as her powers evolved, but that ended in her being effectively written out of the book.

Windshear was introduced during this run, and it’s not clear why.  His power set isn’t particularly exciting, although “hard air molecules” is definitely unique.  It wasn’t clear why he decided to go with Alpha when he quit his job at Roxxon, and once he got to Canada, and it was discovered he was born there, we only saw glimmers of his self-doubt, to no great effect.  That’s a story that could have been built up a lot more, especially since the rest of the team is now more seasoned than him, but it was just glossed over. 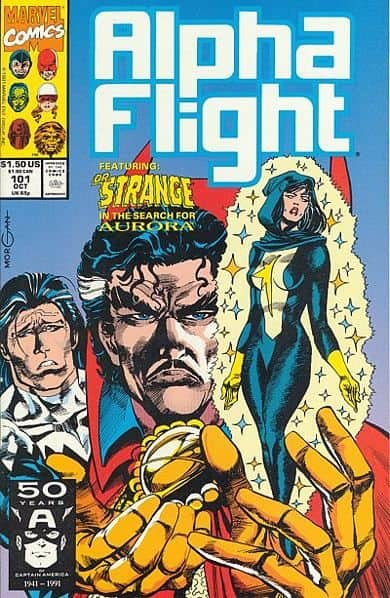 Maybe the problem is that there were just too many characters on the team for them to get much space.  Puck’s returned to the team, but doesn’t appear to have feelings for Heather anymore (also, he’s invulnerable?  I still don’t understand that one). Sasquatch is working alongside his great love again, but they barely talk. Talisman gets a brain injury for no good reason and just disappears.  Shaman’s guilt is gone. Northstar only occasionally remembers to be a jerk. Box doesn’t remember until the last issue of the run that he’s engaged. Nicieza filled each issue with story, but mostly forgot the characters, treating them as interchangeably as the guest star Avengers and Fantastic Four.  Even the Headlok story, which has the characters’ fears revealed, didn’t do anything to propel any of them forward, aside from Aurora.

I think of Nicieza as one of the most reliable journeymen writers of the early 90s.  His comics were never bad, but they were also never very memorable. His Alpha Flight work fits right into that zone.

In terms of the art, I was always pleased with Michael Bair’s work on this book.  He’s a difficult artist – he draws small and detailed images, which sometimes due to colour or inking errors, make it hard to follow, or to identify characters.  There are lots of places where I wasn’t sure what was happening, but in general, I really like his work.

Two things really stand out in Bair’s art, and I found that I became mildly obsessed with both while I was reading these issues.  For one, he draws flying characters in very strange poses. They often look like they’re falling from great heights, or gently floating like leaves dropping from trees in autumn.  He often draws them from odd angles, that help show off his other quirk. No one draws rear ends like Michael Bair! I’m not sure how I feel about that, but it’s a clear fact. The women in this book got a lot thicker during his time, especially Aurora, and her odd flight patterns helped draw the readers’ eyes right there.  I want to go back to his run on Young All-Stars (a future column, for sure) and see if the same thing was happening there, or if it’s something he developed just for this book.

Another thing I like about the visuals for this book is some of the new character designs.  Vindicator’s reverse-colourway Guardian suit looks incredibly cool.  I’ve always loved the Guardian look from Byrne’s day on the title, but this inversion really makes it pop, and gives Mac’s character some edge.  Likewise, I think that the new look Aurora sports, which marries conventional/sexy superhero tights with a hood that evokes her nun’s habit, is unique and a winner.  They’re not all gems though – I hate Windshear’s look, especially his boxy helmet.

Bair was succeeded on the book by Tom Morgan, whom I’m going to have a lot more to say about in my next column.  From what I remember, his work (and especially his Sasquatch) was beyond terrible, as was the writing when Scott Lobdell took over.  I remember having some hope for the next run, but ended up hating (although still buying) it. We’ll find out next time if it’s as bad as I remember, or worse.

If you’d like to read any of the stories I talk about here, you’re going to have to do some longbox digging, I’m afraid.