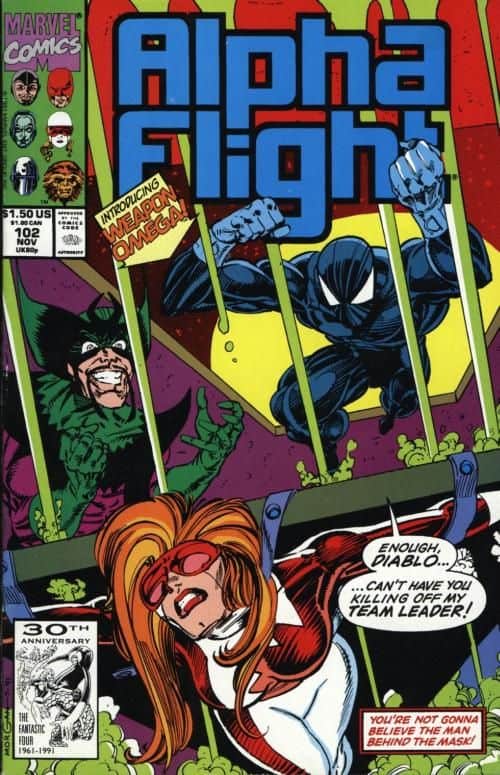 I feel like there were two tiers of crappy Marvel comics in the early and mid 90s.  One is the familiar kind drawn and then “written” by superstar artists who just wanted to introduce new characters every few pages.  The other kind is the B-list books that tried to make their way by imitating X-Force. When I think about books like that, one of the names that quickly comes to mind is writer Scott Lobdell.  For some reason, he was given control of Alpha Flight, and was joined by Tom Morgan, who did his best to imitate the Liefeldian school of bizarre anatomy and no substance. What I remember from these books is, of course, the famous “coming out” issue that centred on Northstar, which I remember at the time as being very disappointing, because of just how bad it looked and read.  Beyond that, I remember being annoyed by the direction the book went, and not really being interested in the introduction of Weapon Omega, a desperate attempt to leech off the growing popularity of Deadpool at the time.

Are these comics as bad as I remember?  Are they possibly worse? Let’s find out… 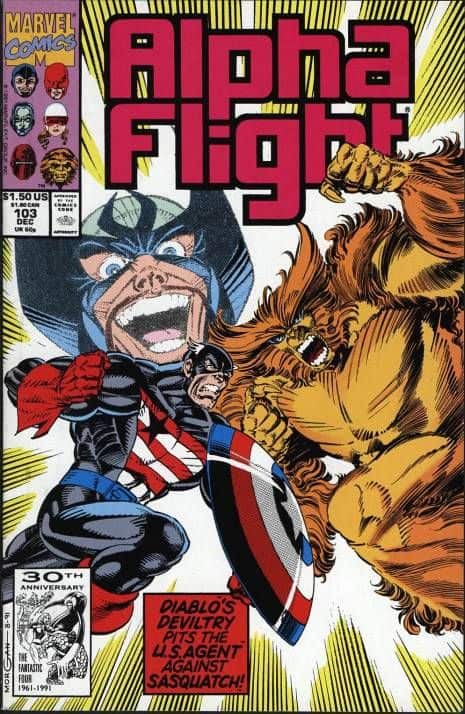 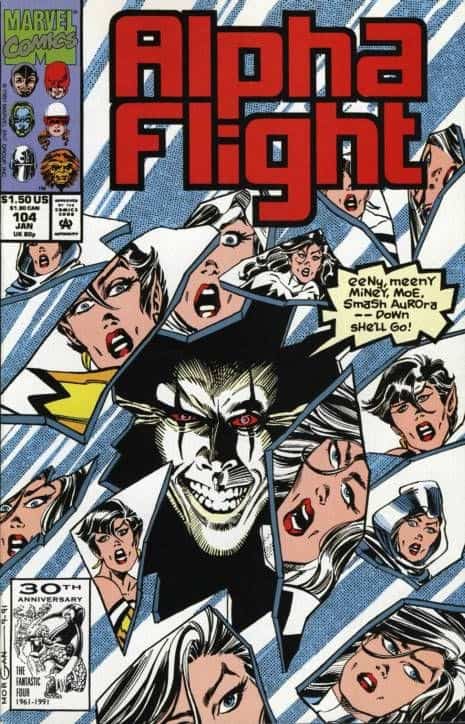 The bar for good comics in 1991 and 1992 was shockingly low, but I still think that this run managed to come nowhere close to it.  Fabian Nicieza spent his entire run setting up a new structure for the team, complete with an elaborate support network, and Scott Lobdell effectively wiped it away, focusing on a core team that never really did very much. 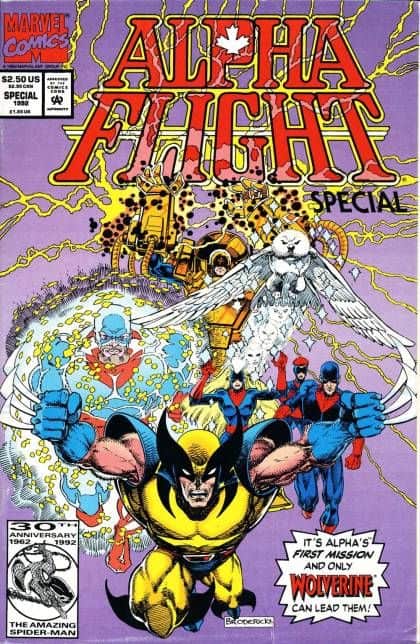 He added Weapon Omega in an effort to capitalize on the popularity of both Deadpool and Wolverine, but then didn’t give him that much space or the spotlight.  He restored Aurora’s previous mental instability, and then just used it for the occasional joke. For some reason he made Windshear the team’s administrative leader, I think just as an excuse to get him out of the book most of the time, and relegated Puck to hanging around the office.  Guardian lost prominence, and was written in such a way that Heather Hudson was unrecognizable. He got rid of Box and Diamond Lil.

And then there’s Northstar.  I think that having Jean-Paul come out of the closet could have been, were it handled better, a much more important statement, and the start of some very thoughtful stories, but instead, we got an overwrought coming out story, followed by nothing at all.  Basically, Jean-Paul got tossed back into the closet, because his sexuality didn’t get acknowledged or even mentioned again during Lobdell’s run. It instead became a gimmick designed to juice sales on one issue, which I can’t imagine attracted many new readers to the title, being as awful as it was.

I got the feeling that Lobdell didn’t much care for the concept of a Canadian super team, as the team spent much of his run travelling to other countries.  Lobdell is a controversial writer for me. He drove me off the X-Men around this same time, where I hated his blend of nonsensical action issues and sit around and talk issues.  Killing off Colossus was a final straw. I know he has his fans, both back in the day and even for his current DC work, but it’s not something I’ve ever understood. I’ve always found him to be terrible with characters.

I’m not sure why the Special was written, introducing three new characters, one of whom was immediately killed off, and the other two just immediately forgotten.  It added nothing to the team’s history, and in some ways, contradicted established continuity. I don’t think that continuity needs to be treated as sacrosanct, but if you’re going to make changes, there should at least be a good reason for it.

And then there’s the art.  Tom Morgan’s work on this run moves from barely acceptable to pretty terrible.  Most memorable for me is the way in which he drew Sasquatch, making him look like the creatures that turn into Gremlins if you feed them after midnight.  Jeanne-Marie has massive hair, as does Heather, and Kyle, when not wearing his Weapon Omega mask, looks nothing like how he was portrayed in every appearance before this.  The normally lithe Northstar, who was a downhill skier, now looks like a bodybuilder. I get that there was pressure in this era to try to ape artists like Jim Lee and Rob Liefeld, but Lee never drew these characters looking like this when he was on the book!

I don’t even think I can talk about Mark Pacella’s issue.

The best thing that can be said about this run was that it was mercifully short, although I don’t believe that Simon Furman’s run was much better.  I did end up dropping the title while Furman was writing it, but we’ll talk about that next time.

This run hasn’t been collected anywhere as a whole run, but you can read issue 106 in this collection: