Stomping Grounds is recapped before Seth and Becky come down. Seth says that Corbin was smart to get a ref he couldn’t bash in with a chair and who wanted to take the title from him to get back at Becky. Becky says that Lacey had nothing in the fight and had to try and steal a title for someone else. Heels sneak attack and we get a brawl. Seth and Becky propose a mixed tag and if they win, the heels never get a shot. Corbin says it’s now winner takes all at the PPV. Revival and Rowan and Bryan face New Day and the Usos with a partner being taken out causing a full team to be taken out. Wilder eats an accidental shot and then he takes out Bryan. What a stupid heel move there as now it’s 4 on 2, advantage babyfaces. Dawson hits a superplex, but eats an Uso splash to end it. 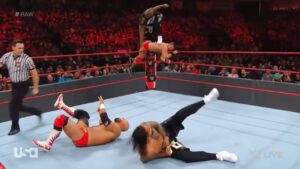 Lashley vs. Strowman is hyped in a tug of war, with Braun pulling a truck to practice. Miz TV is up with Truth and Maverick and we get a recap of Truth’s win and Miz gets word that if Truth faces Maverick now, others will be banned from ringside. Truth takes him out with a jumping flatliner – so that stip meant nothing. Jobbers come in and Cedric can only get 2 off the Neuralizer. Drake leaves all sad and gets the goodbye song. Lacey and Corbin have a meeting teasing some minor problems, because of course. Drew and Shane face Roman in a handicap match with the heels taking him down with steps. Shane goes for the coast to coast, but Taker returns and catches him in mid-air with a chokeslam. Why Shane just jumped at him with no plan is beyond me, but hey, it’s a great moment.

Taker brawls with Drew, who may actually have a chance to get over a bit just being in the ring with Taker. After this bit of excitement with Taker, we get a tug of war. Braun wins and then they brawl for a bit. AJ chats about Ricochet before the Club tells him they’re at the top of their game. AJ tells them they lost. They then face the Viking Raiders, who beat them quickly with the Viking Experience. Nikki blames herself for Alexa losing last night and Nikki says they have to come up with a way to get Alexa a rematch. Then Alexa and Nikki argue with Nattie and Naomi before we get more 24/7 hijinx. Heath hits Sweetness on Truth and wins the title. EC3 and Mojo hit each other and Truth regains the title with the jumping flatliner. Lumbar Check gives Cedric the title. EC3 hits the headlock driver on the floor and wins! EC3 GETS ON RAW AND WINS! IT’S A MIRACLE! Sadly, he can’t run and he gets distracted by Mella and Truth schoolboys him to win it again.

Ricochet says he’ll do anything to prove that he’s a great champion and he says it took the support of the Universe to get him here. Kofi faces Sami in a good, short match and wins with a sunset flip by stacking him up. KO challenges him to a match and Kofi agrees and lands an SOS on the ramp to win my countout. Kofi trust falls onto beth men afterwards. Joe jumps Kofi to instantly put himself into the WWE Title mix out of nowhere – good, Joe should be in the WWE Title mix and he lands a big uranage on the ramp before choking him out.

Taker and Reigns vs. Drew and Shane is announced for Extreme Rules. Alexa and Naomi awkwardly battle before Nikki shoves them both down and Nattie runs down and it’s now a tag match. Nikki hits the twist and shout after a Bliss tag and Bliss gets the pin. Ricochet and AJ are given the main event slot and given time. It’s a fantastic showcase for both men, with each man hitting their signature offense and AJ beating Ricochet with the forearm. I wouldn’t have had Ricochet lose so quickly, nor had Cole say this MIGHT put him in contention. OF COURSE IT DOES. AJ grabs Ricochet’s belt and then lifts him up to hug and show respect. Great match – one of the best on Raw all year, but it was a step back for Ricochet.