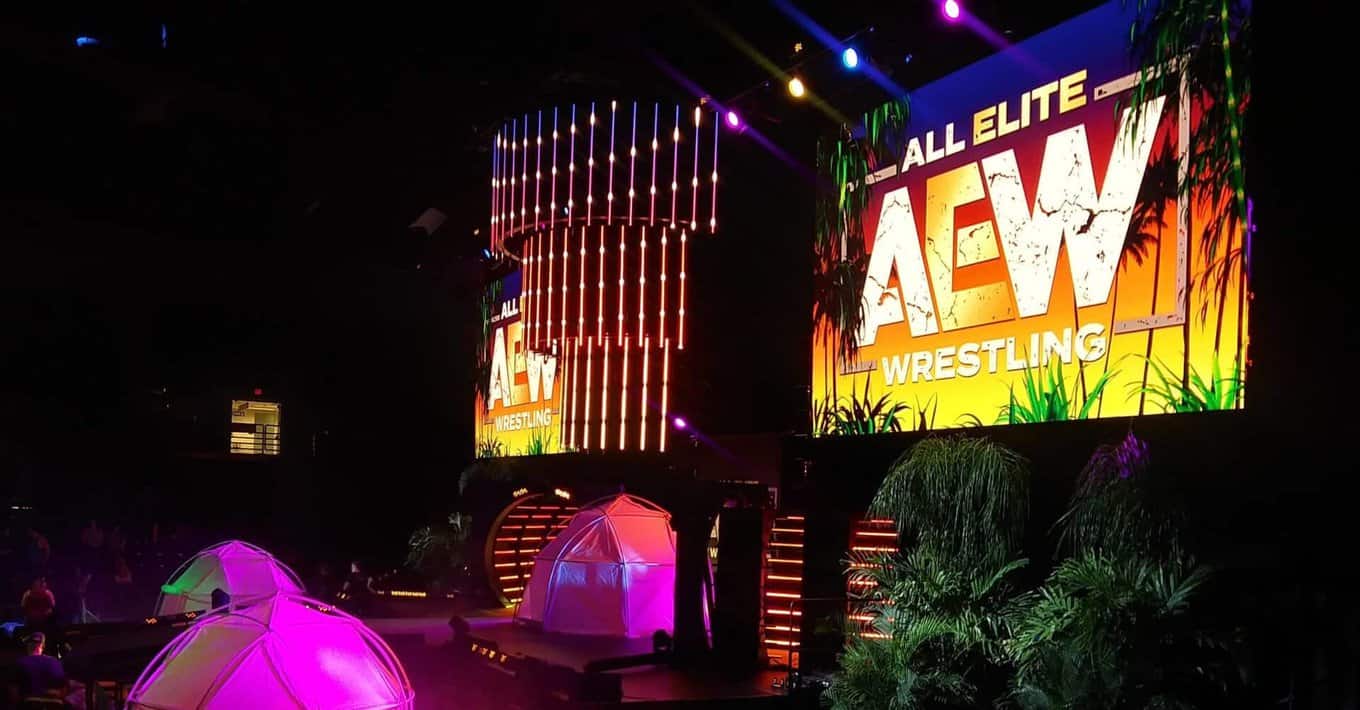 Having been to wrestling events of all kinds over the last 25 years, I was more than a little curious about AEW’s second show. While overall the night was fantastic, there were a few live event hiccups that I’m sure hindered some people’s experiences and I’m guessing translated to TV (haven’t had a chance to watch it back yet).

– The biggest issue for the crowd was the lack of monitors. This may be just an issue with the arena we were in but there were no screens showing the action. So anytime someone went to the floor (which you know was quite often), we were all struggling to follow the action. Its completely understandable why AEW didn’t use the entrance screens as that would have interfered with the visual product but something needs to be added so fans don’t feel like they’re missing part of the show by actually being there live.

– I saw this posted before but the TV music. Double or Nothing’s music feed drove me nuts and being there live just made me more upset. And that’s because AEW’s music library is pretty damn good! I can’t tell you how many times I saw wrestling fans DANCING to themes they’ve never heard before! Good music kept the pace of the show upbeat and exciting for each new match. Its something small but we all know how effective a good wrestling theme is.

– The Fyter Fest theme. Now I went to the wrestling show but not the convention. I don’t really have any interest in it but damn was I blown away with how packed the place was. Not only was it busy but it may have been one of the best setups I’ve seen for a convention of that nature. Many people have been down on AEW being tied to CEO for this event but I can honestly say these seem like two organizations that know how to treat their audience. And if you didn’t want to be in on the joke regarding the Fyre/Fyter shitck then it probably annoyed you and looked bush league cheesy. But I found it a blast to see some of the tacky decorations and props and if you follow some of AEW’s roster, everyone was in on the joke posting all day and really driving the social media conversation for the show.

– The in ring action was far superior to anything I’ve seen in years. It truly was a variety show where 4 1/2 hours flew by. Every match delivered (even the weird hardcore Buy In match) and connected with the live crowd with only the Darby Allin trust fall bump and Cody chairshot drawing uncertain mutters from most. All in all, it was fantastic seeing a new breed of pro-wrestling showcased on a major US stage.

– The live crowd was a much bigger mix of families than I could have predicted. As a father of two, I’d be a little hesitant to take my 8yo to any AEW show until he was a little older. Although, I did grow up in the Attitude Era so I somewhat knew what to expect compared to some other parents. AEW may be smart to put disclaimers with their shows in the beginning until the public is more familiar with the adult nature of the product once they debut on TNT.

By the end of the night I had lost my voice for the first time at a wrestling show in 20 years. Sure there were hiccups here and there but from a guy who has been to shows by everyone from WWE, ECW and WCW to TNA, ROH and my local indies, AEW is on the right track to becoming possibly the most fan-friendly wrestling organization in history.