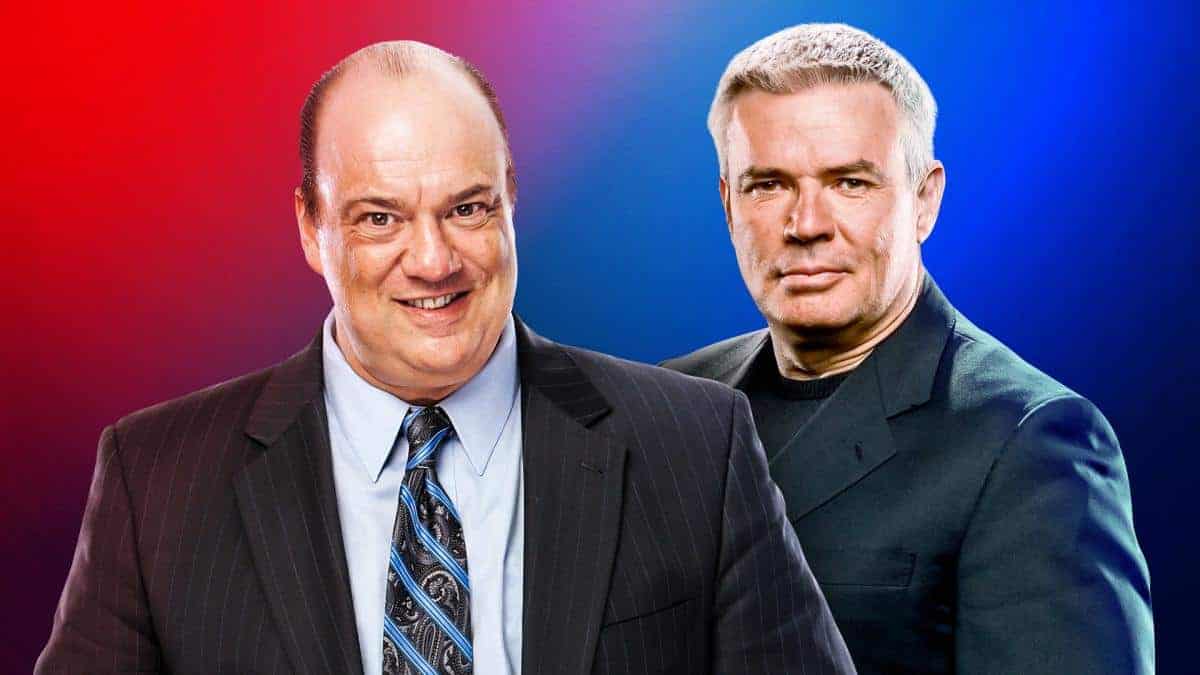 Well, there’s been some news in WWE-land that has been… interesting? Well, it’s too early to tell if it’s anything else, so “interesting” will be the adjective du jour.

On a similar topic, you can see in that second link the results of the previous poll which indicates that most readers here at the Pulse think the WWE’s writing is the biggest issue the WWE has at the moment. Apparently 85% of respondents put writing down as one of their answers. I think the two are possibly related.

So… will Heyman & Bischoff make a difference? I guess that depends on what exactly this role entails. How much say will they have into the booking of the matches? How much input will they have into long-term storylines? Is this just a storyline “executive director” role or is it real? So many questions and we will all have to wait to see what the actual answers will end up being.

But let’s assume they are taking on a creative overseer style of role for each brand. That’s got to be good, right?

Well, let’s look at Heyman first. He was regarded as something of a masterful booker, with the ability to book matches that would accentuate the positives of the wrestlers in the ring while hiding their deficiencies. That was what made the original ECW work – the wrestlers were put into matches in such a way that they looked great. And the fact that so many of these guys did not do so well in the WWF/E or WCW (where this sort of booking was not utilised) showed just how masterful he was at that. Then he went to WWF/E and was soon the head writer for Smackdown, reaching that level in about 2002. Under Heyman, we had the Smackdown 6, where any combination of these 6 athletes could come together and put on a wrestling clinic. More to the point, he would finish each Smackdown with a 20-plus minute wrestling clinic featuring some of (or all of) these guys. He accentuated the cruiserweights he had. And he made Brock Lesnar, who was a rookie at the time, into a star by superb booking and finding veterans willing to put him over. Lesnar should be paying the Rock a percentage of every paycheque he earns; Rock put him over cleanly and let Brock look impressive as all hell in that Summerslam 2002 match, Brock’s first big feud. As far as I’m concerned, that match made Lesnar. Yeah, Heyman has the runs on the board.

But he also allowed the Sandman crucifix angle at ECW, which – even though I am not a religious person – did seem to go over a line for US audiences. I also thought the Cyrus angle (the “Network” angle) was an act of spite that was cutting off the nose to spite the face, and it always felt poorly acted. The Chuck & Billy gay wedding fiasco occurred under his Smackdown watch (which I actually wrote about last week for a university essay… yes, using wrestling in academia – I call that a win). And I’m pretty sure the Al Wilson crap occurred under his watch as well, but my timing might be off there.

In all, though, Heyman seems to be a good move on behalf of the WWE.

Now, Bischoff. He gave us the New World Order angle (which, admittedly, was something he did steal from a few other promotions, although he did it remarkably well), which really did change the face of wrestling at first. And… and… he… gave… us… what? Look, I am really struggling here to think of good things Bischoff did during his time in charge of WCW. Pushing the international cruiserweights, there’s one. I always enjoyed seeing a Mexican wrestler spot-fest start each PPV. Creating the Goldberg monster streak was good, leading to a World Title and an awesome match with DDP. And… that’s it. His TNA run was unforgettable and… yeah.

So, the negatives. Oh, Christ… WCW.
* Too much nWo (including giving them their own f’n PPV)
* nWo v nWo (black & white v Wolfpac, for those too young to remember…)
* the main event of Uncensored 1996 where Hulk Hogan and Randy Savage defeated 8 other wrestlers (who were working together as a team – the Alliance to Defeat Hulkamania!) in a triple tower cage (I wish I was making this up)
* Dennis Rodman v Randy Savage (including a spot with a portaloo)
* Jay Leno – main eventer
* the Hog Wild/Road Wild PPVs
* misuse of Bret Hart (then the best regarded free agent in the world of wrestling, and he made his debut as a freakin’ referee?)
* challenging Vince McMahon to a fight and then having him counted out when he didn’t show up at a PPV that people paid money to see…
Okay, okay. Sure. But how about TNA? He must have learnt from his mistakes, right?
* Garrett Bischoff being pushed to the moon
*Aces & 8s (had potential but was such a useless joke)
* the Immortal faction (including trying to turn Jeff Hardy heel)
* putting TNA Impact up against Raw on Monday nights…

Okay, I’m not sure I’m seeing how this is a brilliant idea by the WWE.

So, I would expect Raw to be on an upswing and Smackdown to… remain the same, really.

Now, a diversion: the writing. Here is what I think is the biggest issue with the writing in WWE: It does not make sense. But – and this is a big thing – this is hardly a new phenomenon. I mean, back in 2013 a column was written here on the Pulse trying to look for the positives in WWE story-telling.

Okay, that “no sense” crack is maybe a little unfair. But what I am seeing smacks to me of writing by committee. There is no one over-arching vision that ties everything together. Insta-feuds are the name of the game. To my way of thinking, everything should be geared towards the wrestlers wanting one of four things:
(1) I want the title (whichever title that is) and have to defeat you to get myself closer to that goal,
(2) I want to keep my title (whichever title that is),
(3) I don’t want you to have that title because [the title-holder is my friend/I don’t think you deserve it/you’re new and I’ve been here longer/you’re old and I’m new blood/I’ve been paid to keep you away from the title by the boss or some-one else/insert other legitimate reason here] and will do anything to stop you,
(4) I want revenge because you cost me my shot at that title.
Maybe (5) I want to prove myself, that I deserve to be here (or still be here if an older wrestler).
Anything else is meaningless and veers sharply away from, you know, wrestling. No matter how much they try to deny it, WWE is still in the business of wrestling.

Oh, I will say here, one of the funniest bits from the documentary Beyond The Mat is only hilarious in retrospect. Remember, this doco was done in 1999, and in it, Vince says wrestling is secondary to his ultimate goal of becoming a movie mogul. No, he seriously says this. How’s that goin’ for ya? (Says the writer who has had a grand total of 3 books published.) That could explain a lot… If the current WWE product is indicative of the writing he currently uses, no wonder the films are crap (and I own Knucklehead, The Chaperone and more than one of the Marine films so I know what I am talking about, unfortunately… yes, I am sad and old). Sorry. Rambling.

Another issue is the size of the rosters. They are freakin’ huge! Trying to involve everyone in something is almost impossible, which does explain the introduction of the 24/7 Title to give all those with nothing to do some camera time… But that is lazy writing and a forced response to panicked writing. No, I don’t think it’s lazy (though it does seem like it at times) – I think it is panicking writers trying to protect their jobs, think of something to involve wrestlers they’ve been told to push, and keep an audience engaged.

That probably explains why we have so many recycled storylines. I mean, the evil owner/boss storyline? Started, from what I can gather, by Bischoff when he joined the nWo, taken to an insane level by McMahon (resulting in him winning the WWF/E title), and overdone to an extremely bizarre level by Vince Russo (don’t get me started about that reign of terror in WCW).

Heyman & Bischoff. A bandaid solution or the end to what ails WWE? Let’s wait and see shall we. But I am not holding my breath.