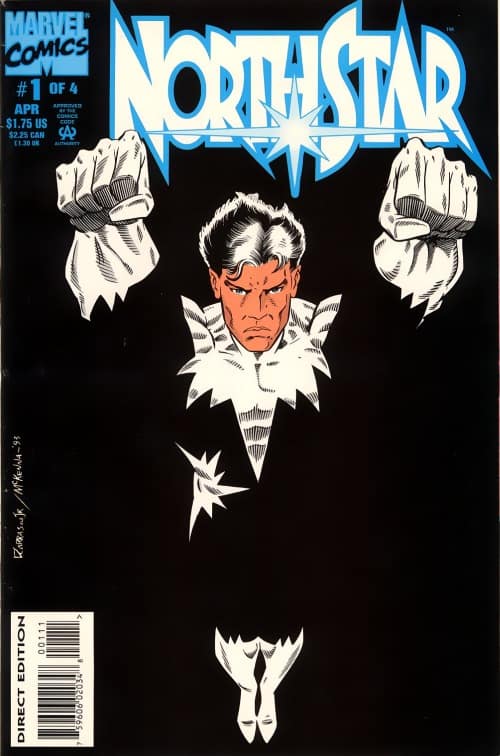 I’m not sure I even ever knew that the Northstar miniseries was a thing.  By the time Alpha Flight was canceled, it had been more than a year since I’d read it, and I’d lost all interest in (if not love for) these characters.  The miniseries continued from the end of the parent book, and took the same creative team with it, so my expectations are low. The covers are nice though, and it’s cool to see Jean-Paul back in his original costume, so I have some minor hope.

Jean-Paul was originally a very interesting character, but as time went on, he became little more than a generic background superhero.  Even his coming out of the closet added little to the character because of the way he was mostly ignored. I wonder if, in this series, Furman did anything to enrich him.

Let’s track who turned up in the title:
Villains

It’s not so much that this miniseries is bad (it really kind of is) as that it’s ultimately pointless.  Jean-Paul gets taken on a “This Is Your Life” trip down memory lane, complete with bombs and killer circus folk, all to come to the realization that he can do better than he has been, only to go into character limbo for a few years.  This was not used to build the character into something new, as he barely appears in the next two iterations of Alpha Flight, and doesn’t become a member of the X-Men until 2002, eight years later. So why give him this spotlight that none of the other members of Alpha Flight have had before or since?

It’s not to explore his unique status as the first “out” gay Marvel character, as his sexuality is only alluded to in passing, and half of those instances could have been referring to his mutant status.  We spend more time thinking about his brief time spent with separatists in Quebec growing up.

This book is incredibly 90s in its lack of editorial cohesion.  We are left with some interesting questions when all is said and done.  What happened to Jean-Paul’s friend Raul, who we saw get attacked by Weapon PRIME, but never heard of again.  How did Max, his old friend, know where he was flying to when he escaped Weapon PRIME at his Spanish villa? And where was that anyway?  Why did we keep seeing references to Mariel’s friend, but never saw the guy? Were he and Jean-Paul together at some point? What exactly made it necessary for Northstar to go to Russia when the circus he worked with was in Canada?  Was Simon Furman’s plan to always have Jean-Paul’s misery be concocted by a rich man he’s never heard of, or was that a last minute change? How would Kerridge have learned so much about him anyway?

Art-wise, there are a lot of problems with inconsistency.  I don’t want to put the blame on the artist, Dario Carrasco Jr. so much as on the fact that seven inkers worked on these four issues.  They added weird lines to people’s faces in an attempt to evoke Rob Liefeld, and made everyone look like they were in pain in every panel.  The inconsistency of colourists meant that one character shifted from black to white. The reason I don’t blame Carrasco, or don’t put all the blame at his feet is that I legitimately love the covers on this series.

I don’t even know if I have it in me to discuss the character designs in this book.  Weapon PRIME first showed up in X-Force, the land of bad designs, so we can’t blame the awfulness of Killspree on anyone associated with this book.  Still, he is one ugly, terrible character. As a side note, this is the last that team ever shows up in comics as a team. I’m surprised that no one has ever revisited them.  They’d have been great cameos in something like X-Statix…

The characters that Furman and Carrasco came up for this book, even when they are knowingly parodies of 90s characters, as so bad that I’m at a loss for words.  Needless to say, they were never seen again either.

That this is how Alpha Flight flickered out after eleven years makes me sad.  John Byrne created a truly unique group of characters, and set them up in unique and original ways that should have led to decades more stories, but the 90s had a way of rendering everything toxic and terrible.  Three years later, the title was revived, in the capable hands of Steven T. Seagle, who took it in some new directions. I remember being a big fan of this book, but it didn’t even last two years. We’ll look at it next time.

It can’t be a surprise that this series has never been collected.  I’m sure it can be found in quarter bins somewhere though.