Welcome to the column where I talk about the latest Spider-Man Movie, Spider-Man: Far from Home

This article contains major spoilers for Spider-Man: Far from Home in theatres now.

The latest installment of the Marvel Cinematic Universe is touted to be the last film in the epic “Infinity Saga” of the MCU. This is quite evident considering we have no clue as to what the next marvel movie that will release can potentially be.

Spider-Man: Far from Home has been highly praised so far and some people have gone on to say that this might be the best live action Spider-Man Film to date. While I believe it could be a solid contender for the title, I don’t think it could be stated as the best. But Hey, we all have or opinions. So this isn’t a big deal.

The movie was a definite step up from the previous film. One of the best things that I noticed about the movie was that it was about Spider-Man stepping up and being a hero of his own right. For a while, I was afraid that they might focus on making Spidey the next Iron Man type figure. They sidestepped that cleverly by positioning Iron Man as an inspiration to follow upon rather than a role model to emulate.

I am much very interested in breaking down the 2 credits scenes, one of which is especially integral to the future of Spider-Man in the MCU.

The After Credits Scene 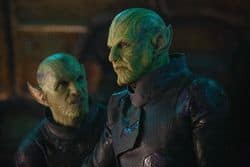 This credits scene effectively rewrites the entire film but it is presented in a comedic manner that makes it difficult to take this scene seriously. The credits show that the Nick Fury and Maria Hill that we had met in the film were in fact skrulls named Talos and Soren. If they ring a bell, it is because both of them showed up in Captain Marvel.

Any speculation that they are now bad guys is immediately destroyed as they are shown to be reporting to the Human Nick Fury. They also confirm that this entire operation took place on the orders of Nick Fury himself, dispelling any remaining doubts.

Whether this may have any long lasting impact on the marvel cinematic universe is something that remains to be seen. But other than a throwaway line or a joke, I don’t see it being referenced again.

This is it. The big one, The scene begins with a sense of joy (for us viewers) as we have the MCU Debut of the loud mouthed Spider Hating J Jonah Jameson. It is made even better by the fact that it is JK Simmons himself returning to the role that he made his own in the original Raimi Films.

He calls Spider-Man a menace and shows an edited vide of previous events of the film making it seem that Spider-Man was the cause of all the damage wrought by Mysterio (can’t believe people thought he was going to be a good guy). This video was sent by Mysterio prior to his death

But that’s not the kicker.

Mysterio reveals to the entire world that Spider-Man is Peter Parker. This is without a doubt, big. This is going to have a major impact on Spider-Man going forward. Spidey has always had a secret Id. The decision to change that is going to be a very controversial one that will be heavily debated.

There sets up the possibility of an arc where Peter visits Dr. Strange leading to the reversal of the revelation of his identity. Who knows?

The MCU has changed Spider-Man yet again. Will that be for the better or worse? Time will tell.