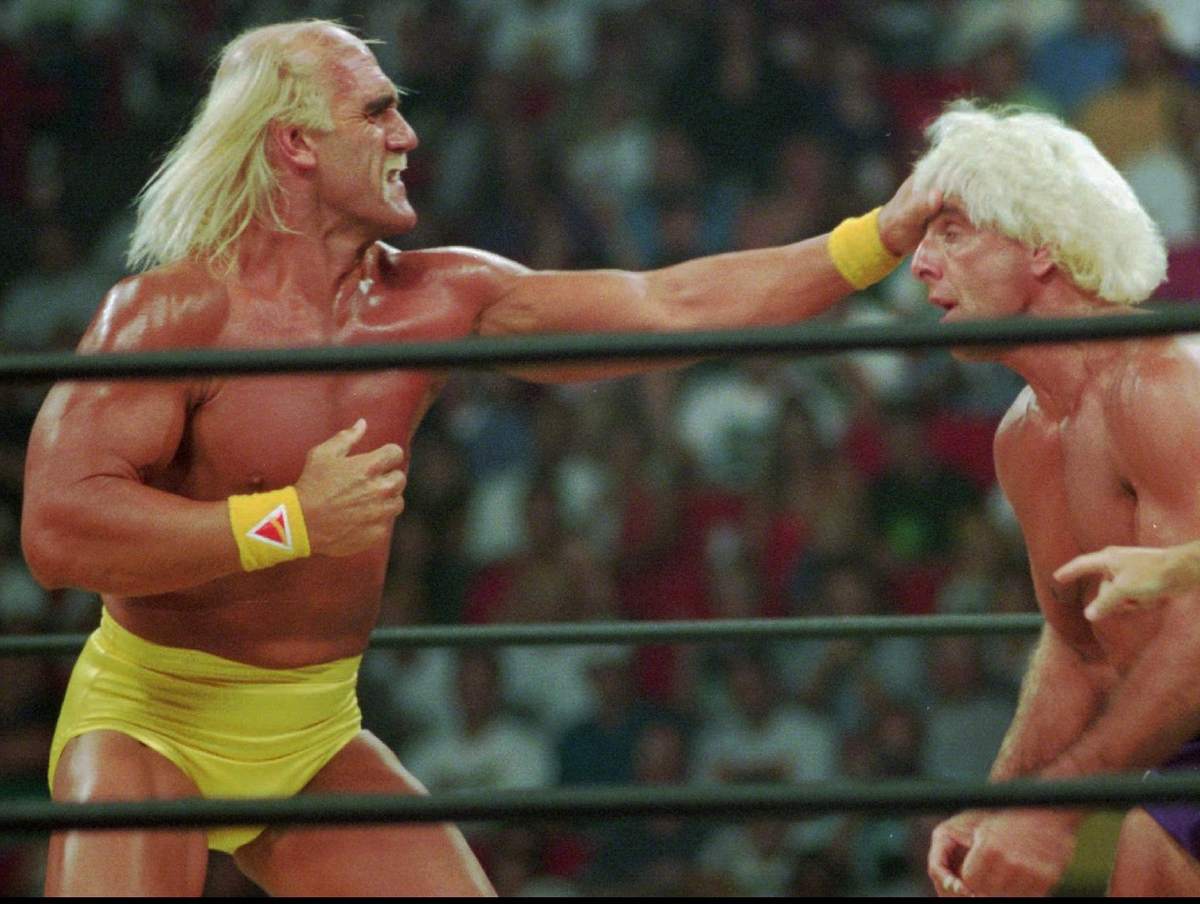 I recently watched the AEW Fyter Fest and then went back and watched AEW’s Double Or Nothing PPV. These have been two of the best wrestling shows I have seen in years. The best matches I have seen this year have included the Rhodes brothers, Young Bucks against Lucha Brothers and the 6-man gymnastics exhibition from Fyter Fest.

Why do I mention these three matches? Because the crowd was cheering for all of them. The really good 3-way tag match to kick off the Fyter Fest buy-in was the same, as was Cima-Daniels at Fyter Fest itself. Rollins v Styles at WWE’s Money In The Bank, the same, and that was the best match of that show; Johnny Gargano against Adam Cole at NXT TakeOver New York and NXT TakeOver XXV saw the crowd split 50-50 between the two of them.

In all of these matches, there were not any really heelish things done. Yes, Brandi Rhodes interfered a couple of times in the Rhodes brothers clash, but once she went, apart from the belt, the crowd cheered moves both guys did. Yes, they were more behind Dustin, but no-one really booed when Cody won.

Seriously, who could boo Dustin for a blade job like THIS?!

That’s a lot of waffling from me, but there is a point to my meandering: are heels and faces needed anymore in professional wrestling? Do we need to have bad guys and good guys to cheer and boo? Is this still the 1980s world where the cartoon cheer and boo formula is desperately needed? But, hang on, even back then, what was one of the best Wrestlemania main events of the Hogan era? I offer to you Hulk Hogan v Ultimate Warrior, face v face. The crowd was divided and it was one of the best main events of that time. Fast forward a few years, and a WCW reject suddenly came to the fore in the (then) WWF as a tweener – Steve Austin. He did heel things, but he was such a fan favourite it was ridiculous.

I ask again: Do we need heels or faces? Okay, let me ask this: Do we have heels and faces in boxing or MMA? Sure, some people might have an attitude that makes people want to see them get the snot kicked out of them, but they don’t do the “heel” things almost demanded of professional wrestling. In games involving teams, we don’t have “heels” and “faces”. What we have, instead, is supporters. People who go, hoping their team will win, expecting to see a good contest. Good guys and bad guys might come up with rivalries, but both sides still have their supporters.

I think the problem was during the “Attitude Era” everyone acted like a heel to some degree, even the fan favourites. At the same time, in WCW, everything was so overdosed with the New World Order that people had no choice but to cheer for them, a nominally heel stable, made worse when fan favourite Sting joined the Wolfpac faction with Kevin Nash – the epitome of cool at that time in WCW. Then, the WCW/ECW Invasion botched angle happened, and the heels were supposed to be WCW/ECW but they were booked so appallingly and to be such losers that the WWE looked like the heels just beating up the “special class” kids.

Not saying who’s who here…

We have now gone back to having heels and faces in WWE to a ridiculous, almost cartoon-like level. I expect that soon all heels in WWE will be forced to have long, thin moustaches they can twirl when giving their promos. Instead, who are the crowds cheering? Their favourites from years ago (e.g. The Undertaker) or people who give good matches (see AJ Styles). For example, Daniel Bryan is supposed to be a heel, but at Stomping Grounds, he was being cheered, and the opponents were getting boos. The main event of Wrestlemania 35 saw all three women getting cheered at various points. The crowd just wanted to see good wrestling, and they got it.

In the reverse, the WWE so wants us to cheer Roman Reigns. But the crowd does not want to. They can’t boo him because he does nothing to deserve it and, you know, the cancer thing, but they don’t cheer him and he is generally greeted by silence.

The wrestling promotions for years have told us who to boo and who to cheer, but I think audiences in this day and age are smarter than that. They promotions have changed the rules for cheering and booing so many times, they’ve forced face/heel turns on so many wrestlers, they’ve put popular wrestlers into so many ridiculous positions that make them look like losers… People don’t trust the promotions any longer when it comes to who they “are supposed to” like.

TNA was bad for this. The crowd would get behind a wrestler like AJ Styles or Christopher Daniels, but then they would be booked to lose and look like losers so often the crowd did not know what to think and started to turn away. And the wrestlers who were pushed – like Mr Kennedy Anderson – were seen as WWE rejects and the crowd did not care.

So, dating back to the mid-1990s when the cartoon era was slowly being eradicated, when wrestlers of skill like Bret Hart and Shawn Michaels were pushed in the wake of the steroid trials, the fans have been treated like idiots. Well, it seems as though today the crowds don’t care as much what they are being told. They will do what they want. And what they want is to see good in-ring action. That’s why AEW is suddenly being seen as a viable alternative – the in-ring stuff is strong. Yes, they have a decent look (they certainly don’t look as bush-league as ECW did), they are everywhere on social media, and they do have some characters, but they give the good in-ring action.

Now, I am not saying that it is all shades of grey. MJF in AEW is definitely positioning himself as a heel. Entertaining as all hell, but definitely a heel. Jericho is trying to position himself as a heel, but the crowd wants to cheer him. Jon Moxley is in a tweener position, attacking everyone and anyone. But that is not the focus of the in-ring stuff; getting people to boo or cheer individuals is secondary to delivering a product that is impressive. They want people to cheer for what they are seeing. That is first and foremost.

Crowds have grown up. Crowds demand more than being told who is a bad guy and who is a good guy, then being told to sit down, shut up and watch. Look, the crowds have always wanted to see good wrestling, even before the WWWF became the WWF, but nowadays, after 35 years of being dictated to by the promotions who see the TV product as more important than what the people want, I think the crowds have become so jaded that that is all they want now – good wrestling. Stuff the promotions, they will cheer who they want. Hell, we might even end up with crowds being split between two wrestlers; how awesome would it be to have a football-style crowd, seeing a crowd split between the Team Becky/Team Charlotte camps as those two put on a great match? On the other hand, a Randy Orton/Roman Reigns match might just get the crowd not cheering for anyone or just chanting about how boring the alleged product they are being given is. Sure, the WWE won’t listen, but I wouldn’t mind betting the crowds will indicate who they like and who they don’t more and more, regardless of what they are being told by the powers that be.

Now, I am the first to admit, old habits die hard. Crowds might still expect to see some-one portrayed as a heel or a face in order to be invested in a story-line. But, as I said in a recent column if the writing is stripped back to its basics, then none of that matters. Let the crowds react how they want. Let them form opposing teams, let them have duelling chants, let them run the show a little bit more. We don’t need faces and heels to get behind; we need athletes we can relate to and who give us what we want – something worth watching in the ring.

It’s still real to me, dammit!

Let wrestling mirror legitimate sports a little more. Don’t tell us who to cheer and who to boo. Let us decide. Those who deserve it will get what they deserve. And those who don’t… Well. Yeah.

But, despite having just typed out 1400-plus words, I am not holding my breath. In my opinion, we don’t need faces and heels in professional wrestling in the current sporting environment, but it seems that we are going to get them, no matter what.