Before Hammer got into the horror genre, they were establishing themselves in science fiction. They had done well in the mid-50s with The Four Sided Triangle and X The Unknown. Their biggest science fiction hit came when they made a deal to adapt the BBC’s Quartermass trilogy from six-part miniseries to feature films. The studio would make all three over time. Scream Factory is releasing the last two titles on separate Blu-rays. The Quatermass Xperiment (released in the US as The Creeping Unknown) introduced the character of Professor Bernard Quatermass. He’s a British rocket scientist who stumbles onto an extraterrestrial threat. The success of the film and it’s ability to attract and American audience made Hammer green light the second film in the series. They were in the Quatermass business before Dracula and Frankenstein arrived. Quatermass II (released in America as Enemy From Space) continued the cinematic series that reminds us of a time when being a Rocket Scientist was the height of being smart.

Quatermass (Brian Donlevy) is having the usual issue of anyone involved in a government agency. He can’t get funding for his moon colonization base. He has an amazing model of the facility that isn’t quite like the moonbase on Space: 1999. He is so frustrated that politicians are nickel and diming this vision of the future. To get away from the angst, he hits the road for Winnerden Flats where he’s received reports of meteorites landing on the rural community. This is where he gets a major shock when he encounters his giant base already built. But before he can examine how this has happened, he meets up with a black uniformed group of soldiers with machine guns and strange face scars. They inform Quatermass that he needs to go away. He sneaks back on the sight as part of an official government tour with a member of Parliament. That doesn’t go well and Quatermass once more has to escape. He needs to find help to expose what he fears is an invasion from aliens. His main help is a journalist played by Sid James from the Carry On movies. 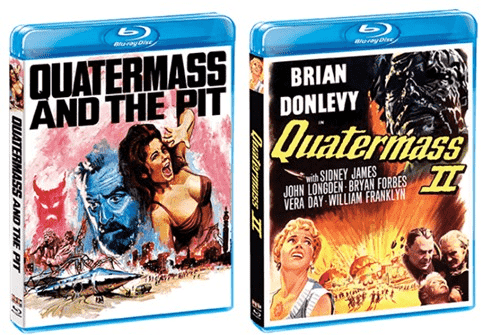 Quatermass II is a fine alien invasion movie that touches on the paranoia from the body snatching films. So there’s so much to like about the film. Although the writer of the three miniseries had a major issue with Brian Donlevy. Quatermass was supposed to be Great Britain’s smartest mind. Donlevy was strictly American although not as American as Kevin Costner’s Robin Hood in Prince of Thieves. All this would be remedied in 1967 when Quatermass and the Pit (released in the USA as Five Million Year To Earth) arrived with Scotland’s own Andrew Keir as the title character. It took Hammer nearly a decade to find a partner to produce the end of the trilogy, but the wait was worth it. This became one of the best science fiction films produced in England.

While digging an expansion on the Hobbs End Tube station, workers uncover an unusual skull followed by more skeletal remains. This immediately causes the dig to go from construction to archeology. Things get even more delicate when they uncover what appears to be the outershell of a rocket. They fear it’s a bomb. Quatermass has had his Moon colonization project stalled by the government. To get away from the situation, he follows Colonel Breen (The Empire Strikes Back‘s Julian Glover) to Hobbs End. There’s a fear that the metal device is a V-2 rocket from World War II. As Quatermass pokes around the dig, they discover a skeleton inside the rocket. This leads to an argument that these two discovers are linked. Quatermass swears this is a rocket and the bodies were aliens. Things get hairy when they activate something inside the rocket that is still very effective. Quatermass has to act fast to save humanity.

Quatermass and The Pit played on TV back in the ’70s under the old title. The film stuck with me. While the pace at first is more investigatory, the pace picks up and doesn’t let go. Hammer really elevated this production. While the two films aren’t being sold as a double feature, it’s easy to watch them back to back. There’s something refreshing about the rocket scientist being the main character in the film and not merely the expert who gets used for quick exposition.

The video is 1.33 full frame for Quatermass II and 1.66:1 anamorphic for The Pit. Both transfers are out of this world. The black and white transfers for II brings out the rustic and futuristic elements of the film. The color and detail on The Pit is crystal clear and pops. This is so much better than what got broadcast in the late ’70s in the afternoon. The audio for both films are DTS-HD MA Mono of their original mixes. The Pit also has a 5.1 DTS-HD MA Surround that lets the effects wrap around the room during the big scene at the end. Both films are subtitled.

Audio Commentaries are provided with crew and film historians. The most vital sits down Director Val Guest and writer Nigel Kneale to revisit their film. Both men passed away over a decade ago so it’s good to hear their reflections. A second track has film historian Ted Newsom give details and background. Finally a third track gives us historians Steve Haberman and Constantine Nasr. So much of the film is covered by these tracks.

Interview with Director Val Guest (20:56) has him talk about how Hammer hired him to do a comedy. He originally working with Peter Sellers to get Up The Creek made. He got brought onto Quartermass while leaving for vacation for Tangiers.

Interview with Special Effects Assistant Brian Johnson (3:10) catches up with the guy who also did effects for Space: 1999. Brian shares a strange Val Guest story involving his caravan. He talks about the matte painter.

Interview with Third Assistant Director Hugh Harlow (1:41) was one of his first films. He recalls shooting at the oil refinery that was the base.

US Theatrical Trailer (1:54) sets up the alien invasion angle. There will be soul losing if you don’t heed the warnings.

Audio Commentaries cover all the elements of the film. The first has film historian Bruce G. Hallenbeck. The second tracks is filmmaker Constantine Nasr And Author/Film Historian Steve Haberman. The third is once more the first one to see with director Roy Ward Baker And Writer Nigel Kneale. Both filmmakers have passed on so once more it’s great to have this conversation about their creation.

Interview With Actor Hugh Futcher (6:40) has him talk about meeting Roy Ward Baker on the set and made him feel welcome. He talks about his “secret” that made him notorious in the acting world.

Interview With Academy Award-Winning Special Effects Artist Brian Johnson (5:10) has him talk about getting involved with the film after seeing the original BBC series as a kid. Johnson would go on to work on Alien and Space: 1999.

Interview With Clapper Loader Trevor Coop (8:26) allows the guy who slates the film and put film in the camera to get his say.

Interview With Focus Puller Bob Jordan (2:23) features the man that kept things from getting blurry. He talks about working with the camera crew.

Interview With Author Judith Kerr (17:56) deals with her husband Nigel Kneale who wrote the screenplay. She calls him “Tom” for some reason.

Interview With Actor Julian Glover (30:42) has him remember that working for Hammer was great because they offered roles rather fast instead of numerous call backs. He was eager to work with Roy Ward Baker and his co-stars. He liked the original TV miniseries.

Interview With Actor/Writer Mark Gatiss (20:04) allows him to express his appreciation of Hammer films. He grew up watching their films on TV during their “Appointment With Fear” series.

Interview With Filmmaker Joe Dante (11:34) dips into his memories of seeing Hammer films as a kid. The use of color grabbed his young eyes.

Interview With Author/Film Historian Kim Newman (30:47) has him remember reading the scripts before he was able to see them. That was the original VHS. He finally saw it on Christmas on 1972. He talks about the unique horror found in the Quatermass films.

Interview With author/Hammer Film Historian Marcus Hearn (12:56) focuses on how The Quatermass Xperiment helped them make the transition from B-movies to top bill projects. The film also was the first time they got an X rating.

World of Hammer – Sci-Fi (25:39) is the clip show narrated by Oliver Reed. This is the same episode that’s a bonus feature on Quatermass II.

Theatrical Trailers (5:10) are both the US and UK trailers with their respective titles. They show a lot of the action.

TV Spots (1:25) promises that they will come when we least expect it.

Alternate U.S. Credits (0:27) is the opening title card for Give Million Years To Earth.

Still Gallery (5:48) are press photos, posters, newspaper ads for the release. It was double billed with Circus of Fear.