The US Festival was the first major outdoor rock concert in California after the horrific ending of the Rolling Stones at Altamont. But unlike the tragic night of errors that happened to bring a vile end to the ’60s, the US Festival was a bright shining time for the kids of the ’80s. The legend of the festival grew with a “you should have been there” nostalgia. Now you can get a taste of that time with the arrival of Santana Live At US Festival. Carlos Santana and his band hit the stage with their spiritual solos and tasty beats. Here’s the press release from Shout! Factory with the setlist and bonus features: 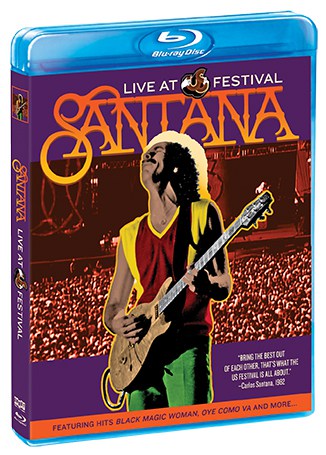 SANTANA LIVE AT US FESTIVAL
COMING TO BLU-RAY™, DVD AND DIGITAL
FROM SHOUT! FACTORY
ON SEPTEMBER 6, 2019

Los Angeles, CA – On Labor Day Weekend in 1982, Santana took the stage at US Festival in San Bernardino, California, and gave the audience a thrilling performance. Coming to Blu-ray™ and DVD from Shout! Factory on September 6, Santana Live At US Festival captures the electrifying live experience of this important moment in music history, and contains the hits “Black Magic Woman,” “Gypsy Queen,” and “Oye Como Va,” as well as an appearance by special guest Herbie Hancock on “Incident at Neshabur,” interspersed with interviews with Carlos Santana. Special features include interviews with Santana reflecting on his career, his signature sound, and the theory of his music, as well as an interview outtake.

Conceived by Apple co-founder Steve Wozniak and music impresario Bill Graham, US Festival was a transformative event for Santana in his long and illustrious career, and this performance from September 4, 1982 represents the Rock and Roll Hall of Famer at his best.

From award-winning filmmaker and rockumentarian Glenn Aveni, Santana Live At US Festival offers fans a first row seat to this tremendous performance from the legend, which rivaled his set at Woodstock for its energy, excitement, and inspiring musicianship.

Santana is on tour now.

With Special Guest Herbie Hancock – Keyboards on “Incident at Neshabur”