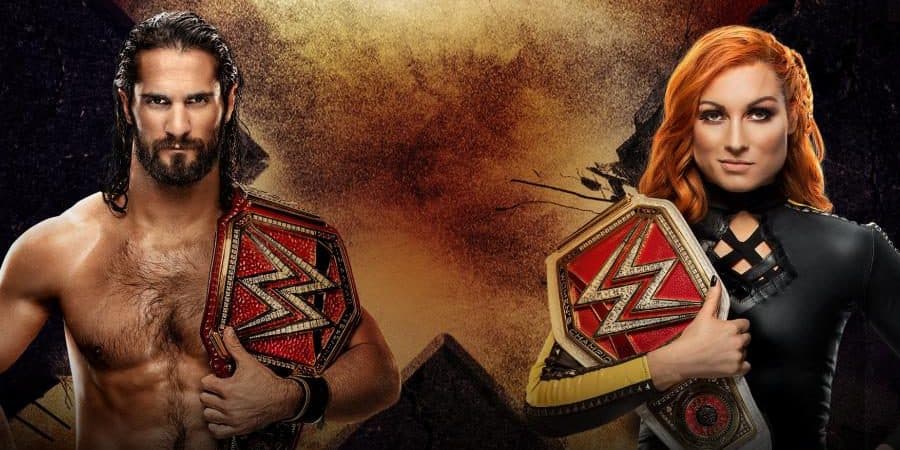 I missed the AEW show, but hope to catch up on it soon. Sorry, but I had an essay due. Yes, I have something akin to a life… I doubt I’ll do a 10 Thoughts on it (unless I am asked to) because by then it will be later than probably would make it worthwhile.

However, the essay was handed up on time (Sunday night here in Australia), it’s now Monday, and so I get to watch Extreme Rules without worrying about how I’m going to discuss student alcohol misuse. Somehow, I think I got the short end of the stick in this one. Now, on paper, this could well be a great show. However, WWE booking tells me I am going to be mightily let down. Please, WWE, prove me wrong…

I will say this before I start – the video package for my least anticipated match on the card was pretty awesome.

(1) The IC match on the pre-show? Well… okay. Finn Balor v. Shinsuke Nakamura Well, I will say this – it was a fine match. Back and forth. Finn Balor and Shinsuke Nakamura seemed to be almost putting on a try-out match, to validate their jobs with the company. They did well. But it was too short. At only about 7 minutes, it was not long enough. Still, good enough and we have a new IC champ in Nakamura. (Stop putting adverts for the f’n main show in your preshow matches! It is desperate and it makes you look bush league!)

(2) Cruiserweights are on the preshow as well. And, also at 7 minutes, it felt too short, and it was another good match. These two bouts have lifted my hopes for the main show. I like Tony Nese and Drew Gulak is no slouch. Look, it’s not quite what I like from my cruiserweight matches, but it was fine. Best pre-show for ages. Gulak retains, by the way. (And they did the advert thing again!)

(Spin The F’n Wheel?! Seriously? Coal Miner’s Glove On A Pole Match anyone? Sting with laser-beam eyes? AUGH! WCW flashbacks are going to kill me!)

(3) Good, the match we all feared was going to be the main event is jertain curking. Well, it wasn’t the horrendous mess of death and botchiness I feared, but it was not good. Roman Reigns and Drew McIntyre did most of the heavy lifting, Undertaker went through a table and McMahon was McMahon. Oh, and Elias got involved. Goody. Way to  up the match. Nope, didn’t like it, and even at only 15 minutes it felt too long. Undertaker got the pin on McMahon. Yay.

(4) The Revival retained the Raw tag team titles against the Usos in a little over 10 minutes. Look, it was fine for what it was, but felt like a Raw match. A little boring but not awful. That’s it.

(5) I actually enjoyed Aleister Black and Cesaro. It felt like a hard-hitting match – not as hard-hitting as Regal v Finlay, but what is in US wrestling nowadays? – but damn if it wasn’t fun. Some nice strikes, some good wrestling moves and Cesaro showed some impressive strength (again). My only issue was how quickly the finish came after everything else that had come before it, giving Black the duke at less than 10 minutes in. Still, I liked it; it exceeded my expectations by a lo-o-o-ong way.

(6) Bayley defeated Cross and Bliss in ten minutes, then Strowman defeated Lashley in a little over 15 minutes in two bad matches. Bleh. I ask again – why hasn’t Bliss improved in all her years? And I will say landing on gymnastics mats does not an extreme match make.

(7) The Smackdown tag team match lifted things, seeing the New Day get the win over Heavy Machinery and Bryan/Rowan in about 15 minutes of fine tag team wrestling. Heavy Machinery impressed me at Stomping Grounds but there were a few dodgy things this time. Still, not a bad match at all. Oh – I hated the WORM, and the caterpillar is just another bit of similar stupidity. Your opponent has to stay there while a fat guy does a basic 1980s break dance move… get stuffed.

(8) Once again AJ Styles had match of the night. Ricochet and Styles had a great match. But… I think they are trying to force the crowd to boo Styles by having the outside interference give him the win over Ricochet and become new US champ. It feels forced because the crowd want to cheer Styles, and because they couldn’t, they were just quiet and almost dead for a strong match; there were more cheers than boos when Styles won. Look, it was a really good match, don’t get me wrong, but the interference felt forced when these two could easily have had a MOTN without it.

(9) 17 seconds… we might as well say Owens defeating Ziggler didn’t happen, so we get Kingston v Joe for the WWE title in a crazily short 10 minute match. It felt like a Raw/Smackdown match, nothing special, but not terrible or anything. It just felt “there”. Hey… that’s what I wrote for Kofi’s match at MitB… Joe is quickly becoming this generation’s Lex Luger, choking on the big stage.

(10) The mixed tag main event. Hmm… let me see. I. Did. Not. Like. It. Bravo to Lacey Evans for taking all those kendo shots, but she’s still not a wrestler. Corbin is a suck of charisma with the personality of a raw haddock. Lynch (who is one of the best wrestlers in WWE, male or female) and Rollins tried – oh, man, they tried; the double table spot was pretty cool – but the match overall was not good. And those ridiculous camera zooms! F*ck off! 20 minutes of not good. And then… and then… Lesnar cashed in and won the Universal championship from Rollins to close the night. Lesnar has been booked to be a pussy, managed by a manipulative guy. His MitB win was opportunistic and not “beast”-like. And his win here was not the same. Sure, I get that the cash-in is best when you are guaranteed of a win, but this is going against “The Beast”… as if ghetto-blaster dancing Lesnar didn’t do that already…

Look, it was not a terrible show. There were some very good matches, some good matches, some meh matches and some sh*t. I probably won’t watch it again – any of it – but, you know, it was a show. It was there. I’d say watch it once, then put it away, along with 90% of the rest of the WWE PPVs ever…