The upcoming The Harder They Come: Collector’s Edition has quickly become a celebration of Jamaican cinema. The movie is already a classic with action and an essential soundtrack. The bonus features are elevating the release. Along with so much about the original production, we’re getting the recently found No Place Like Home from the director Perry Henzell. Jimmy Cliff became an international sensation with this story about a singer who gets robbed of his hit and must turn to crime to survive. Here’s the press release from Shout! Factory with the abundance of bonus features: 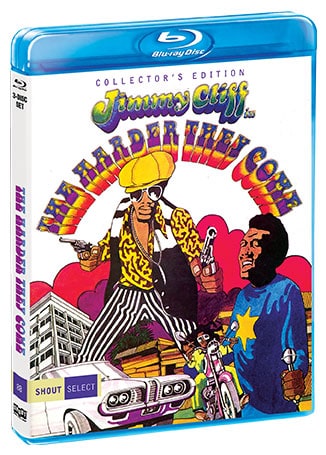 Los Angeles, CA – This summer’s must-have for collector’s, the 3-disc set The Harder They Come [Collector’s Edition], will include 6 hours of new bonus features when it is released August 20th from Shout! Factory (full list below). Filmed in Jamaica earlier this year, the intimate, knowing, and candid conversations, along with illuminating featurettes included, provide an authentic insiders perspective of what it was like to make The Harder They Come, starring reggae icon Jimmy Cliff, as well as Perry Henzell’s second remarkable film, No Place Like Home.

Henzell’s second feature No Place Like Home (filmed between 1973 – 1980) went unseen as the negative was thought lost for over 25 years. Found and restored, this Shout! Factory release, as part of The Harder They Come [Collector’s Edition], is a true cinema event. This beautiful film about a woman escaping her comfort zone, finding beauty, and rediscovering herself in an unfamiliar place can now be seen – with an incredible soundtrack handpicked by Henzell. It features songs performed by Bob Marley, Etta James, Carly Simon, Toots & The Maytals, Marcia Griffiths, Desmond Dekker & The Aces, The Sensations, The Three Degree, Ernest Ranglin, The Heptones, Nasio Fontaine, Lobo, Lord Messam & His Calypsonians, and a song recorded by P.J. Soles.

Also included is a new featurette entitled Duppies In The Control Room – Dynamic Sounds Studios Then and Now, which has new footage of the long-shuttered historic studio intercut with footage from The Harder They Come and Jimmy Cliff recording sessions. An existing interview with the late Perry Henzell by producer/director Arthur Gorson (Cronos, Night Watch, No Place Like Home), whom had first met Henzell in 1973, is included on the release as well, along with other previously existing extras.

The previously unreleased documentary short A Filmmakers Odyssey, produced and directed by Arthur Gorson and David Garonzik, and included in The Harder They Come [Collector’s Edition], captures the inspiring tale of how “No Place Like Home” was found, completed, and put through the hurdle of clearing music rights. The new featurette Rise Up from the Cutting Room Floor looks at the restoration of the film, highlighting the extensive restoration work.

The Harder They Come [Collector’s Edition] is the ultimate tribute to these two films, now available for the first time on Blu-ray™ in the U.S. Along with the treasure trove of new material. The Harder They Come looks better than ever thanks to a new transfer, and Perry Henzell’s legacy continues.

THE HARDER THEY COME – COLLECTOR’S EDITION