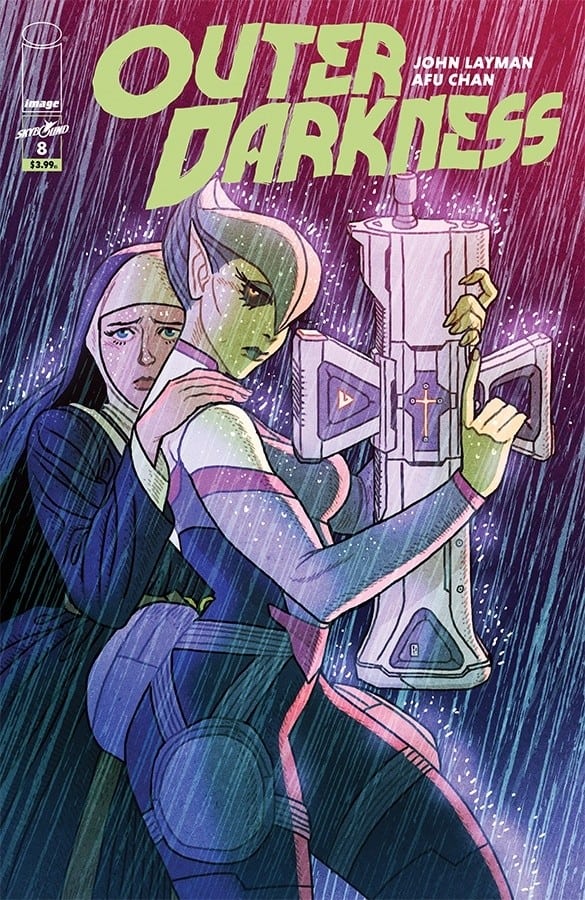 Outer Darkness #8 – When this series began, we were introduced to Malona Hydzek, a traitorous member of the Charon’s crew who was scheduled to be executed.  Captain Rigg saved her and put her back to work, but it’s not until now that we get to learn the truth about her past, and get to know her, as she becomes the focus of this issue.  We also learn more about Sister Magdalena, the French nun who was rescued from a demon-possessed house that’s been floating in space for centuries. With each new issue, I realize just how little John Layman has shared about these characters or this world so far, and I see why this continues to be my favourite new series.  There’s just so much going on in it, and Afu Chan’s art is so great.

Black Hammer/Justice League: Hammer of Justice! #1 – I don’t usually bother with intercompany crossovers, but I have really enjoyed Jeff Lemire’s Black Hammer, and thought it would be interesting to see these characters interact with the Justice League.  Of course, in this first issue, they don’t actually interact, but they do switch places. I’m not sure where this fits in the League’s continuity (it feels pretty recent), but can tell that it falls in before the big recent revelations that have shifted Black Hammer’s whole focus.  I’m intrigued, and I like Michael Walsh’s art, but I’m already starting to fear that six issues is going to be too long for this series. 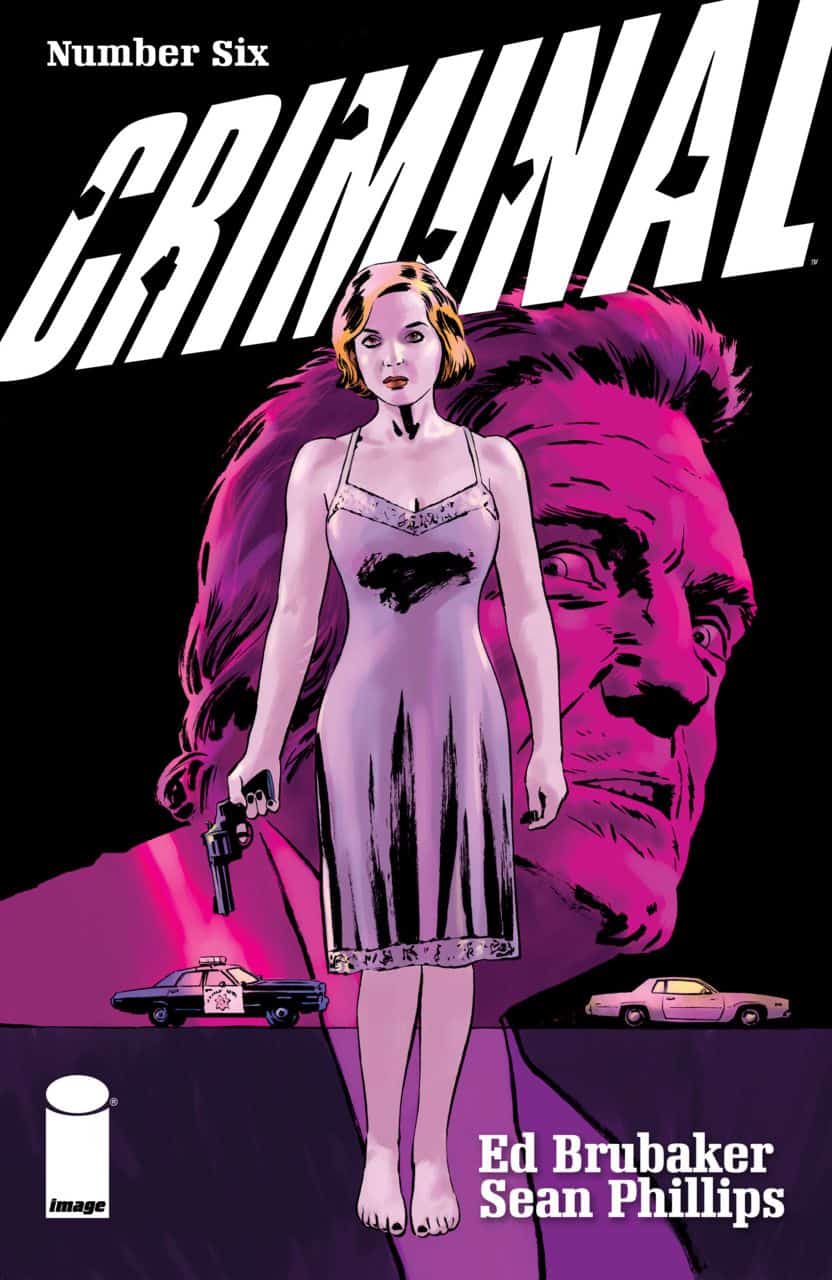 Criminal #6 – This latest arc shifts focus with each issue, so when this one revisits a scene from the last issue, we see it from a completely different perspective.  Ed Brubaker and Sean Phillips use this effectively, helping to explain how it is that Teeg Lawless has hooked up with Jane the mystery woman. It’s another perfectly solid issue of this consistently perfectly solid series.  I never get tired of this book.

Fallen World #3 – I feel like Dan Abnett has left a lot for the last issue of this miniseries to accomplish, as this issue has Father (or is that Bloodfather?) embarking on a mission to gather a number of devices, Rai making an alliance with the tribe of Elephantmen, and Gilad and the Geomancer meeting War Mother and her people.  This book is solid, with very nice Adam Pollina art, but I don’t see how it can easily wrap up next issue.

Gogor #3 – Ken Garing’s inventive fantasy series continues to make me happy.  This issue gives us, and Armano, some facts about Gogor, the Man-Thing like creature he brought from the ground to help him free his people from the Domus.  This issue takes Armano and his friends to a new floating island in search of more answers, and leads them into conflict with the agent of the Domus that’s been tracking them.  Garing fills these pages with new ideas, and with fantastic art. It’s a very attractive series.

Miles Morales: Spider-Man #8 – The last issue ended with Miles being abducted by someone unknown to us.  Now, he spends this whole issue being run through tests and scenarios for some unseen person or organization, which has threatened his family and friends.  What makes this issue very effective is Javier Garrón’s use of thick black panel borders, giving the comic a very claustrophobic and compressed feeling. It works very well.

Oblivion Song #17 – Everyone both on Earth and on Oblivion are trying to figure out what to do about the Faceless Men.  Of course, Nathan and Ed want to take direct action. Robert Kirkman and Lorenzo De Felici have really ratcheted up the tension and stakes in this book over the last couple of issues, and I’m very curious to learn more about these alien beings and what they want.

Star Wars #68 – Greg Pak and Phil Noto have taken over the series with this issue, and it works.  Noto is a great artist for a book like this, as he is able to make the characters look like the actors who portrayed them, but also feel natural as comic art.  Pak has the usual crew splitting up to complete three urgent missions, all of which feel a little contrived. I’m curious to see where he’s going to take these characters, and feel like he has some big shoes to fill, following on Kieron Gillen’s run.

Batman and the Outsiders #3

War of the Realms Omega #1 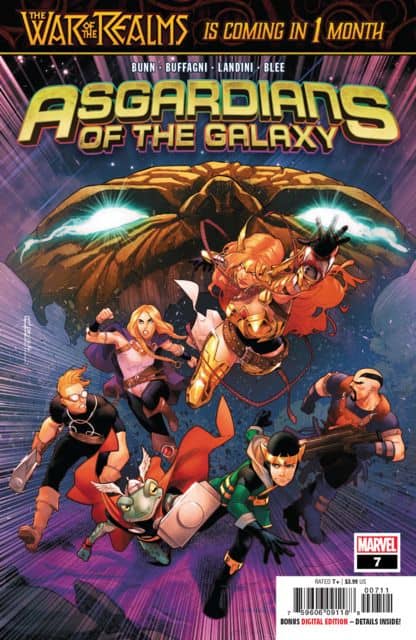 Asgardians of the Galaxy #7 – There are a lot of characters in this issue, as the Asgardians help Yondu’s Ravagers fight off some bad guys while Ego the Living Planet also tries to take them out of the mix.  This is a good issue, setting up the War of the Realms tie-ins to come. I am glad that books like this exist, because there are just so many characters that need to be used more often.

Batman #66-73 – I would consider myself a big fan of Tom King’s writing, but have been consistently disappointed with his run on Batman.  I dropped it when the price increased, but catching up in a big binge, I find that some of the weaknesses of King’s approach become so much more apparent, and I think that the biggest of this is something I’ve noticed since Marvel started shifting many of their titles a bi-weekly schedule a few years ago.  When a book comes out every two weeks, the writer doesn’t feel the need to propel his story very far, knowing that readers don’t have to see as much forward motion. Thus, we get lots of tangential issues, or overly-indulgent decompression. King is very much a structures person, and gets wrapped up in putting together very cool single issues, which sadly don’t seem to add a whole lot to the big picture.  The Knightmares arc, which has Batman captured and dosed with fear gas, went on way too long. Likewise, the revelations of who is behind Batman’s problems is handled oddly, and is spread out too much. The art in this stack is stunning. I feel like Jorge Fornés could be the next David Mazzuchelli, and the other artists are equally impressive. Each individual issue works well, but the gestalt is just lacking.

Meet the Skrulls #2-4 – I’m really enjoying this series about a Skrull family that has been working undercover on Earth for years.  There’s family drama, espionage action, and the uncertainty of what they are working for, and whether or not it’s okay to root for them as the heroes of this story, seeing as they are enemy aliens.  Niko Henrichon’s art is fantastic, and Robbie Thompson shows a solid understanding of character.

Evolution Vol. 1: Origins of a Species – I wanted to like the first volume of Evolution, but after reading six issues, I still didn’t feel very invested in one of the storylines, and felt that the threat – a virus that supercharges evolution is taking over humanity – is very well explained.  There’s a cult aspect, as well as a medical one, and those two threads feel like almost different comics. I was happy to see Joe Infurnari’s art again (I’ve missed his work since The Bunker ended), but don’t feel compelled to come back for any more of this book.  Maybe having four writers worked against it.

Joshua Dysart and Alberto Ponticelli collaborated on one of my all-time favourite Vertigo comics, Unknown Soldier.  In their telling, they shifted the general idea behind the classic character to war-torn Uganda, and gave us one of the freshest and most interesting war comics I’ve ever read.  After that, Dysart made himself the backbone of Valiant’s relaunch, writing Harbinger, the excellent Imperium, and The Life and Death of Toyo Harada.Recently, Dysart and Ponticelli reconnected to create Goodnight Paradise for new publisher TKO Studios (more on them in a bit).  This brilliant and gorgeous graphic novel (or, if you prefer, six-issue miniseries) is set in Venice Beach, an area that is rapidly gentrifying and changing from the down-and-out haven for the homeless and lost that it’s always been to the new home of Snapchat and hundreds of Airbnb units.

The main character is Eddie, an aging drunk who sleeps in the yard of a house near the beach, and spends his days drinking beer and hanging out with some of his friends.  News that his estranged son, Jeronimo, might be coming for a visit, sends Eddie spiralling a little, and it becomes apparent to us that he might not be the most mentally stable of people.  At the same time, we see that he cares deeply about his community and the people who make it up.  He shows concern for Tessa, a young woman who isn’t doing well, and later, ends up finding her body (and her dog’s) in a dumpster.

From here, Eddie takes it on himself to try to figure out what happened to the girl, which takes him down a rabbit hole of shady real estate dealings, drug dealers, and the kind of people looking to exploit young homeless women for money.

This is a very intelligent book, which works hard to not reduce any of these characters to stereotypes or archetypal portrayals.  It feels like Dysart understands these characters and the challenges faced by communities like this, and was careful to be fair to them.

Ponticelli, for his part, kills on this book.  The art is a mix of drawn and painted pages (with colour art provided by Giulia Brusco), and it captures the look and feel of Venice Beach, based on my memories of a day spent there a few years ago, beautifully.  The juxtaposition of the beach, sun, and surf with the squalor of the homeless encampments is poignant, but like in Dysart’s writing, Ponticelli gives everyone great dignity.

This is the first book I’ve read from TKO Studios, a new publisher that is testing out some unconventional practices.  They are not distributing their books through Diamond, but instead through their own site.  Readers have the choice to purchase the trade paperback (which is slightly oversized and on high quality paper) or to buy the six-issue series as individual comics, packaged in a slipcase.  I’m not sure how I feel about that model.  I love serialization, but if I’m reading the story all at once, I’d prefer it be in one book.  Anyway, I’ve picked up two more of their first wave titles, and have preordered one of the upcoming releases.  They have some high quality creators working with them, and I’m excited to see what else they are going to have for us.