IT’S THE LONGEST-RUNNING EPISODIC TELEVISION SHOW IN HISTORY! Brock comes out with the belt as a boom box. Main event recap airs and Paul says that he told everyone that Brock would be cashing in at the PPV. Heyman says he’s got the stroke now and he knows how they’ll determine a challenger – because Brock is a tough negotiatior. Heyman hypes up the entrants, but gets beaten to the punch by the production guys, who he threatens to fire. Heyman hypes up Cesaro a bit, but gets no reaction – less of one than Big E even. Roman gets a giant ovation. Heyman says that Seth started the night as a stud, but became a gelding at the hands of Brock Lesnar. PEW PEW it’s time for Ricochet! Brock surveys him, and that would be a fun match. 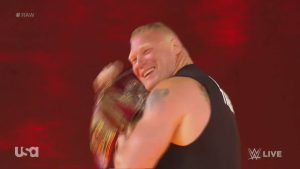 Usos are out too and then we cut back and see that Roode is teaming with the Revival, who came down after one face but before two faces. Faces run wild a ton and win fall 1. Dawson pins Jimmy quickly for fall 2. Revival hits Jey with a double decapitator on the ropes. Ricochet lands a stunning springboard lariat and an Uso dive hits on the floor. Ricochet hits a 630 on Roode for the win. The Club and AJ come down to set up a future six man tag program and we get a brawl. AJ lands the forearm and Ricochet gives it a flip sell that looks incredible.

The Viking Raiders have their backs to the camera in a very red room and then look and stroke their beards. They get an inset promo talking about taking out fools who stand in the path of their raid. Rowe’s German into a Hanson lariat and the viking experience ends it. Taker highlights air. Drew walks backstage looking mad before talking to Cedric, the Street Profits, and No Way Jose. Wow does this ever make Drew look like a star. Cedric comes out in long tights looking like a jobber. Cedric dives onto him, but eats a belly to belly into the buckle. Cedric gets a flash pin and flukes out to pin Drew. Cole calls this the biggest win in his career and then just immediately moves on like it’s nothing to cover Nakamura’s IC Title win. 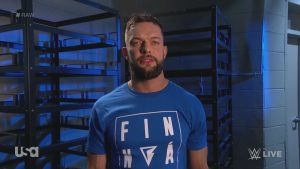 Balor cuts a very boring backstage promo in a very blue shirt about not dwelling on the past and he wants his title back. A recap airs of Brock and Heyman from earlier before The Big Dog Roman Reigns is interviewed. Balor grinds him out and grounds him with a headlock before Joe wins with a crucifix. The lights go out and Bray takes out Balor and shows off his revamped mask with crazy contact lenses. Other than the Sweet Tooth pants, this costuming works! 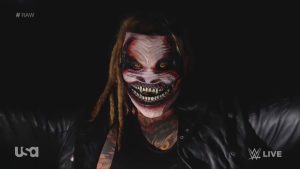 Drake Maverick goes to the hotel and registered them as the 24/7 Champion. Instead of funny comedy, we get WWE comedy with Truth asking for Hornswoggle. The Street Profits watch on in amazement at something and they call Drake a virgin and ramble on about the featured matches. Ryder gets a jobber intro before Mike cuts a promo in the most echoey room in the world. Maria says she’ll take the match since she has a better chance of beating Zack than he does. Rough Ryder ends it in seconds. Mike Kanellis – a bigger geek than Zack Ryder. Maria says that her unborn baby could’ve won – so Mike lost to her, Ryder, and the unborn baby. The Club chats backstage for their 6-man.

They come down to face the Lucha House Party. A giant brawl erupts when Ricochet comes down for a restart. Boot of Doom hits Kalisto before AJ comes in and gets a tap on Kalisto with the calf crusher. PPV main event recap airs before Seth complains about losing and talks about Becky Lynch being super-tough! Then a Bray Wyatt recap airs. Alexa comes out and her being a babyface around Nikki and a heel everywhere else is the closest thing to the greatness of Lex Luger as Sting’s Friend and everyone else’s enemy in 20 years. 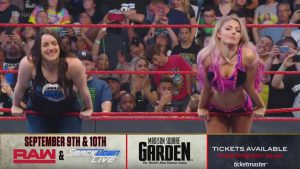 Nattie and Naomi do a double-down off a stereo dropkick. Alexa schoolgirls Carmella and pins her. Nattie goes for a revealing apron suplex on Naomi, but Naomi avoids it. Alexa tries to steal a pin on Nattie during a Romero special on Naomi, but only gets 2. Nattie gets a spiral bomb and Alexa makes another cover to only get 2. Alexa cheating only to yell that she knows she has a 5 count and Nikki reiterates it is fantastic. A this is awful chant breaks out. Nattie drops down off a sunset flip and beats Naomi. Nikki demands cheers for Alexa, who gets locked in a sharpshooter and Nattie gets yet another random Summerslam title match like she did a couple of years ago. Becky says she does better in war than she does in love before Nattie calls her a bitch and says she’ll pull the horseshoe out of her ass.

Randy cuts a promo about the Cross-Branded Top 10 All-Star Battle Royal and wanting to take out Brock with the RKO. Miz is out with MizTV with Dolph. Dolph talks about Miz being a company yes man and he talks smack about Maryse and then Miz gets pissed. Bray recap. Drake and his wife prepare for some fun before Drake reveals that he’s just covered by his belt and his underwear before Truth crossbody blocks him and pins him on the bed. At the desk, Corey suggests a small package would’ve been better and Renee chuckles. A HUMAN EMOTION!? ON RAW!? 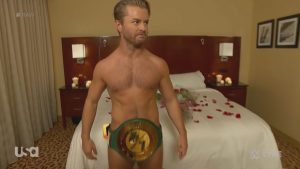 The competitors for the Cross-Branded Top 10 All-Star Battle Royal come out and Brock sits in a chair and watches. Cesaro gets an uppercut chain and the swing on Rey, but Rey avoids getting thrown out. Lashley just tosses Cesaro out before Braun takes him out. Big Ending to Braun before Randy RKOs him. Sami takes out E before eating an RKO and 619 and Randy tosses out Sami. RKO to Reigns. Corbin tosses out Rey, but Seth sends Corbin out. Braun charges both Roman and Seth in the corner and then Braun sidesteps a spear and he hits Seth. Reigns goes for a front chancery on Braun to take him out, but Seth shoves Braun and takes them both out. Orton and Seth go at it Seth gets a stomp and takes out Orton – so it’s Seth vs. Brock at Summerslam. Heyman says that Seth has earned himself a chance to be victimized at Summerslam and Seth tells him to shut up before vowing to win. He wants a fight tonight, so Brock obliges – but gets cut off by the show ending.