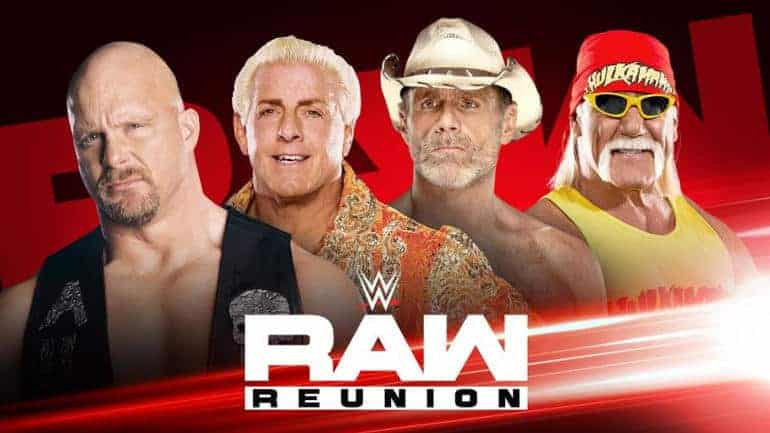 Backstory. I was asked to not only watch this but to post my thoughts on it by some-one who really asked not to be even hinted at because he is in some way involved. He thought I would be honest in my assessment, and he wanted to read it. So I decided I might as well. First, it gives me an excuse to watch Raw Reunion; Second, my mate in the US asked really nicely (and he now owes me).

So… the longest running ever in the history of television episodic show has a reunion show, which I guess is the Raw equivalent of a clip show? Well… let’s see. I reckon it’ll be more a greatest hits package.

We open with John Cena. Well, why not? As I mentioned in a recent column, he is last pop culture star the WWE has produced. Cena panders to the  crowd, and even mentions that to get them to be “nice” (his term) to him all he had to do was turn up at Raw Reunion. He name drops the legends… cheap pops! His says “this” is his home and that wrestling will always be his first love. Well, I’ve seen a few of his films, and that’s a good call by Mr Cena.

The Usos join us. They want Cena to drop some rhymes. Why?! In this PG world – why?! He refuses, but the Usos diss him to start him off. This leads into some sort of poetry (I will not call what they did a “rap”) battle that brings out the Usos’ dad – Rikishi. Rikishi wants Cena to hang around, but before we can get the dancing, the Revival interrupts, along with D-Von Dudley.

And we go backstage so Jimmy Hart and Hulk Hogan can name drop.

And we’re back and Booker T joins us on commentary for Usos (with Rikishi) v The Revival (with D-Von). Yeah, it was an okay match. I don’t do play-by-play; live with it. But the Usos win. Now, why have Rikishi and D-Von out there? No Stinkface? No dancing? No “get the tables!”? Bleh, what a waste.

Backstage Alicia talks hats. Torrie Wilson shows up, then Santino. Yay? The definition of “legend” has clearly changed. Oh, and here’s Santino’s “little friend”. And here’s Drew McIntyre to thankfully bring it to an end with a look of disdain that I know was reflected on my face.

R-Truth at SDCC is recapped, including people trying to get his 24/7 title. Now we have a soap opera interlude and Drake Maverick wins the title before the Godfather shows up. The commentators diss Charley. What backstage morale issues?

After Cedric Alexander’s shock win over Drew McIntyre last week, here’s the rematch that no-one wanted. The match does not even formally start as McIntyre beats the snot out of him before the bell, including an inverted Alabama slam to the ring apron. Welcome to Superstars Jobber Duty!

We get a decent, short Ricochet video. Nice.

Now… Maverick’s bag is full of worms… The Boogeyman? Seriously? And this leads to Pat Patterson pinning him to win the 24/7 title. Smell the prestige! Way to put over a title, WWE!

Christian comes down for commentary. This leads nicely into Viking Raiders v Hawkins/Ryder. Raiders win with the Viking Experience. I like that move, but I can’t imagine them delivering it to, say, Kane. A jobber match again. Nothing to see here.

Backstage with people. Mike Kanellis (sp? Like I care…) talks to Eve, his wife Maria whines, Eric Bischoff offers Mike a job on Smackdown, Maria says she’s the breadwinner, then storms off, leaving Mike looking like the poster boy for “pussy-whipped”. Ron Simmons turns up and says, “Damn!” to him with Jimmy Hart’s megaphone. Well, that last bit made me laugh.

Samoa Joe is walking! (In WCW days, this meant he was going to defect to the nWo…)

The Club is now the OC (Original? Official? Only? Club). Didn’t they learn in TNA not to let AJ spend too long talking?

Brisco has won (off camera) the 24/7 title. Patterson calls him a “stooge”, to make the 5% of viewers who remember that time period groan. Kelly Kelly congratulates him, knees him in the groin, rolls him up and… oh f*ck. She’s the 24/7 champ. WTF?! Way to give the title that glamour it was clearly lacking!

Samoa Joe comes out and a decent section of the crowd actually cheers. Ha! Hey, they gave him a mic. Crowd chants his name. Joe, though, just buries the Raw reunion. And everything he said was 100% correct. “…where we let you, the WWE Universe, put on your rose-coloured glasses and we indulge your ridiculous addiction to nostalgia.” (direct quote – awesome!) But when he brings up the Usos and Rikishi, Roman Reigns comes out cuz dat’s famlee!

Joe and Reigns have a WWE TV-style brawl around the ring area. You know, I think a decent length match between these two could be quite good if they are allowed to just go for it. However, Super-CenaReigns would win so it’d be a forgone conclusion and anticlimactic. Reigns wants a proper match, but Joe won’t fight for this crowd. Reigns calls him a coward, and they cut before Joe’s dirty word can be telecast. Now we have a referee and the match is official. Not a bad TV match. Reigns wins with the spear (surprise!).

Miz-TV with guest Seth Rollins. We recap last week and Seth winning a chance against Brock, then we recap Seth losing to Brock. Seth has a verbal showdown with Heyman that ends with a threat of violence by Seth. Then Seth hypes his match tonight with AJ. Meh.

Sami Zayn’s turn to run down the Raw Reunion. “The whole thing is like watching the Attitude Era through the Face App.” He’s right… and it was funny. Rey Mysterio (not Jr) comes out to demand he shows respect to the guys who paved the way. Kurt Angle intervenes: “When I was General Manager of Raw, if we had a problem, we’d settle it in the ring.” (See, everywhere I’ve worked, it’d be settled in HR, but that’s me…)

Candice pins Kelly – new 24/7 champ. Madusa Alundra Blayze makes her tap out to win the title, but says she won’t be champ for long.

The Coach is here on commentary for Rey Mysterio (not Jr) v Sami Zayn. Decent enough match. It’d be good to see these two go longer, but if you listened to the commentary you’d be hard-pressed to know a match was even on. I don’t miss Coach at all. Zayn tries to bail after dodging a 619, but RVD, Sgt Slaughter, the Hurricane (!) and Angle come out to stop him from running away, Rey hits the 619 and then a 5-star frog splash for the win.

Ric Flair has a limo. No, seriously, we had a shot of him leaving a limo. Gosh!

Alundra Blayze is out to drop the 24/7 title in a trash can but Ted DiBiase, the Million Dollar Man, comes out and buys it – new champ! This is getting tedious… well, tediouser.

Jerry Lawler is out for commentary for the next match – AJ Styles v Seth Rollins. Good match to start with, but then the rest of the OC get involved. But D-X comes out to even up the odds… well, HHH and Shawn Michaels’ grandpa. Then the OC jumps into the ring, DQ win to Seth, D-X comes in. AJ says the OC are like D-X, D-X crotch chops them and there’s a brawl until the OC are outside, where they all grab chairs. But then the Road Dogg comes out to make the save with X-Pac, Kevin Nash and Scott Hall. Road Dogg is still decent on the mic and the OC run off. Seth gets to spout the lead-in to the crowd’s “Suck it!” and he looks like he’s having the time of his life. At least some-one is.

Mark Henry is talking to Mick Foley. Yeah, that happened.

DiBiase is pinned in his limo (unseen, just heard) and Drake comes out with the title, then he’s chased by a horde of jobbers wrestlers.

Mick Foley is in the ring with a mic. Drake runs through with his pursuing posse. Mick tries to share his favourite Raw moment, but is interrupted by Bray Wyatt who gets Foley with a mandible claw. Well, that was the first legend to get owned by a current wrestler superstar.

Moment of Bliss now. Alexa Bliss and Nikki Cross come out, Cross does a decent Lynch impression, and then Becky Lynch is out, then Natalya so Lynch can talk to her face. They have a pull-apart brawl. This segment was… crap. Look, these two don’t need this extraneous BS, just have Natalya say she’s a Hart, she’s the best, she wants the title, and Lynch say she’s the champ and then let them get it on. Their match does not need anything else. This shouldn’t be personal but a matter of who’s the best. It’s actually a match I’m looking forward to; don’t ruin it! Then we have Natalya whining back stage; stop it!

R-Truth pins Drake to get the 24/7 title, then leaves with Drake’s wife. Drake gets Carmella instead. So R-Truth is champ again. Nothing changed. What a freakin’ waste of time and effort.

Kofi Kingston is sponsored by Corona. There’s a message to send the kiddies!

And we finish the show with a legends reunion. Flair leads them out. Hogan out and panders to the crowd. Austin out and he goes to the ring. He looks in the best shape of any of the elderly tonight. Austin delivers a great speech. Austin could re-build morale on his own, I reckon. And everyone joins him in the ring and it’s a beer party and… we’re off the air.

Okay, now, where to start? How about, Samoa Joe’s nostalgia comment was spot on? So was Sami Zayn’s Face App quip. Look, I don’t mind this sort of affectionate look back, I really don’t. But what this show did was indicate how stale the modern product has become. Which member of the current roster can get a pop like Hogan did just walking onto the stage, without a single, solitary boo? How many have the crowd “woo”ing or saying their catch-phrase just by seeing them, as they do with Flair? Who could talk like Austin or Road Dogg did and have the crowd invested in every word they said?

This show reminded a lot of older viewers just what they were missing. Yes, Joe’s “rose-coloured glasses” do come into play, and yes seeing Kelly Kelly and Santino reminded people like me how crap some old things were. Hell, seeing Patterson and Brisco reminded me of their truly appalling evening gown match. Look, I am not advocating a return to the Attitude Era (that was when I started to turn of WWE back in the day, truth be told) but the characters were better thought out back then. The crowd was more invested in them. This 50-50 booking makes people seem like losers as much as winners. That did not happen back in the days of these legends.

The ratings are down, the money is down, everything is down for the WWE at the moment. And what a show like this does is remind the audience how good they used to have it. This could well backfire on the WWE, when the people ask, “Why can’t we have what we used to have?”

And all the WWE has to answer is, “We’re giving you what we are telling you that you want. Isn’t that enough?”

It don’t work that way.