DC Comics Universe and The Terrifics #18 Spoilers and Review follows.

We Finally Get To Bizarro Superman…

…For DC’s Year Of The Villain!

The main story, and the bulk of this issue, is the end of a lacklustre arc around a nanoverse or something.

Even the emotional parts and drama that ends the issue…

…falls flat on story and art.

Fortunately, there is much promise at the end of the book where Apex Lex Luthor actually visits Earth 29… 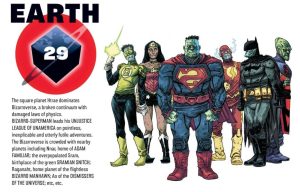 …to make Bizarro Superman an offer..

…for DC’s Year of the Villain!

Well the first part of the book, as I noted above, was not my cup of tea on story or art. I’d rate that part alone probably a 3 out of 10. However, the last two pages of the issue are compelling and likely a 7 out of 10. So, that averages out to a 5 out of 10 for this issue.