Network television used to have serious rules about their shows. The biggest one was that if you were picked up as a series, you better be ready to crank out 22 or more episodes. If you were wanting to only produce 13 episodes for a season, it meant you were canceled mid-season. But over the last few decades, the big quality comedies arrived on pay cable channels. They were known for barely having a dozen episodes per season. The Good Place was able to get NBC excited at the idea of a shorter season so there could be more of a focus on quality episodes instead of the quantity. They didn’t need to match The Office. This less is more approach has made the show maintain a big buzz with its tale of the after life. The Good Place: The Complete Third Season arrives on DVD for folks who want to absorb the entire forking adventure without commercials or worrying about their data rates. Here’s the press release from Shout! Factory: 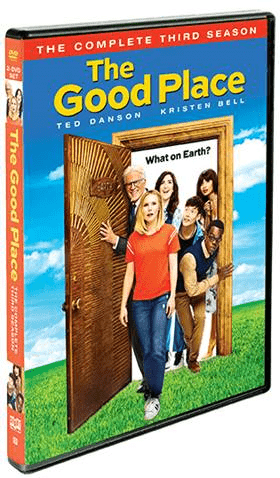 THE GOOD PLACE: THE COMPLETE THIRD SEASON
COMES TO DVD FOR THE FIRST TIME
JULY 30, 2019 FROM SHOUT! FACTORY

From creator Michael Schur (Brooklyn Nine-Nine, Parks and Recreation) comes a unique comedy about what makes a good person. The show follows Eleanor (Kristen Bell, Veronica Mars), Chidi (William Jackson Harper), Tahani (Jameela Jamil), and Jason (Manny Jacinto) – ordinary people who enter the afterlife, and thanks to some kind of error, find themselves in The Good Place instead of The Bad Place (which is definitely where they belong).

At the end of Season 2, Michael (Ted Danson in an Emmy Award-nominated performance) and Janet (D’Arcy Carden) appeared in front of the Judge (Maya Rudolph, also Emmy Award-nominated) to argue that the humans may have been judged unfairly and deserve a second chance. With a snap of her fingers, the Judge sent the humans back to Earth, in a new timeline where they never died.

Now, we get to see what the gang does with their new opportunity …