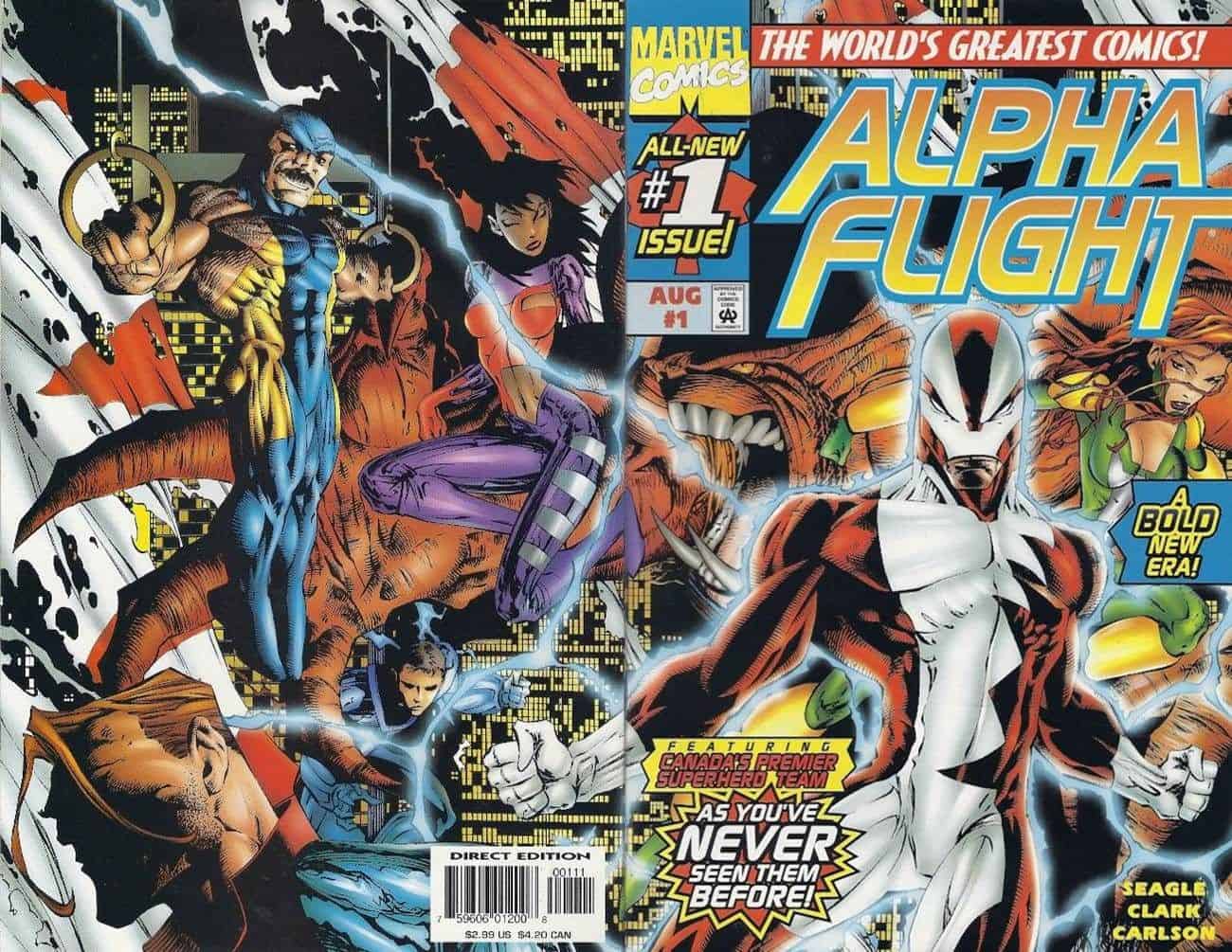 Spoilers (from twenty to twenty-two years ago)

I’ve talked before about how much I admire Steven T. Seagle’s slim body of superhero work, and his independent and Vertigo work, when I wrote about his Primal Force series.  His run on X-Men remains a favourite of mine, but it was his Alpha Flight that spurred me to begin this whole run of retro review columns. I wanted to revisit it, but decided to go through the 130 plus comics that preceded it first, because I wanted to revisit Byrne’s run, and wanted proper context.

When this series began (properly, I’m not talking about the annoying -1 gimmick, I remember being annoyed that so much of the screen time was given over to new characters, when I felt that Alpha already had such a rich vein of characters to tap into.  With time, though, I began to really like what Seagle added to the book, and I was pretty disappointed when the series got canceled. 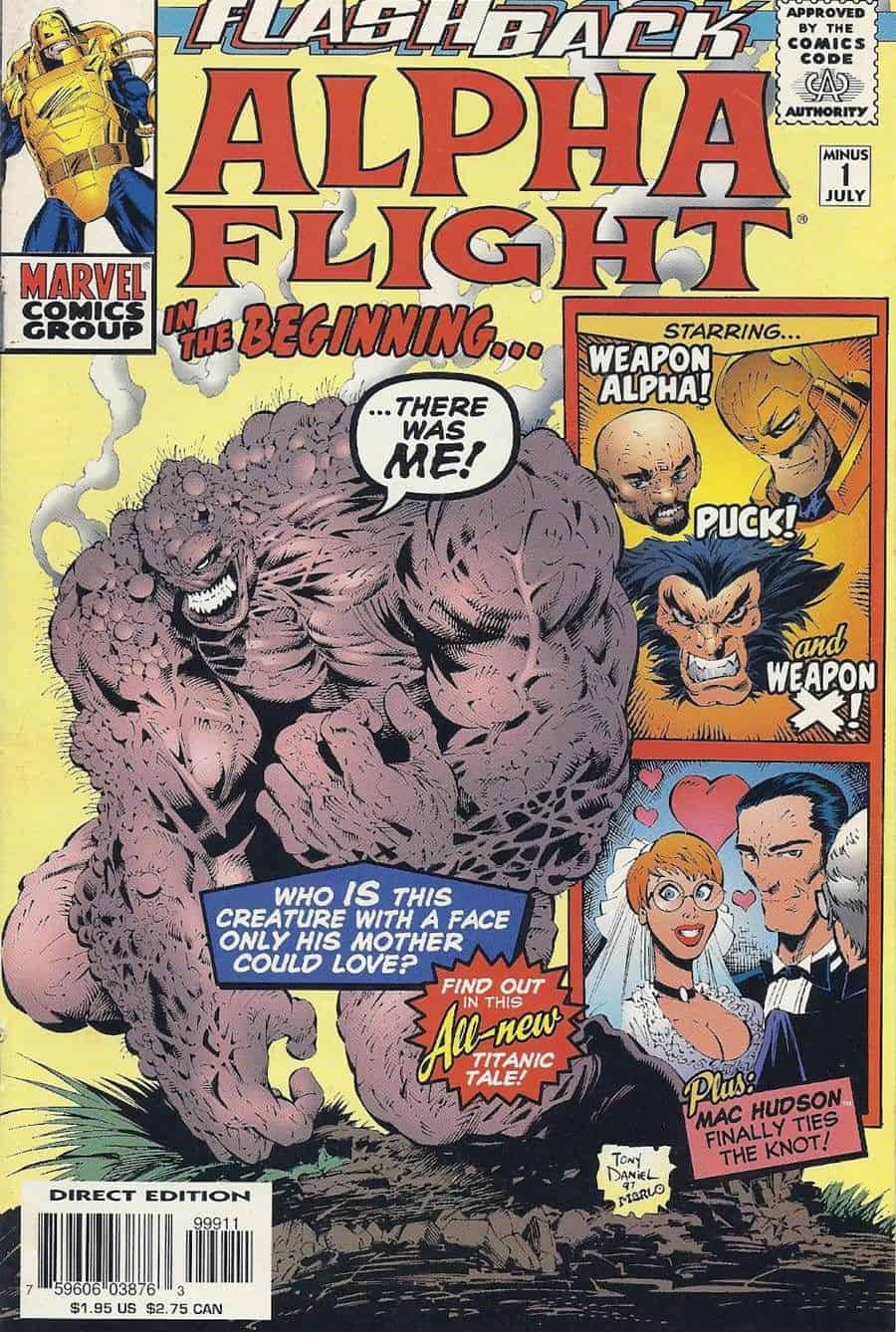 The question I have is, was this book just good in comparison to everything else being put out in the late 90s, when the bar was so low, or was it legitimately a good comic?  Let’s find out… 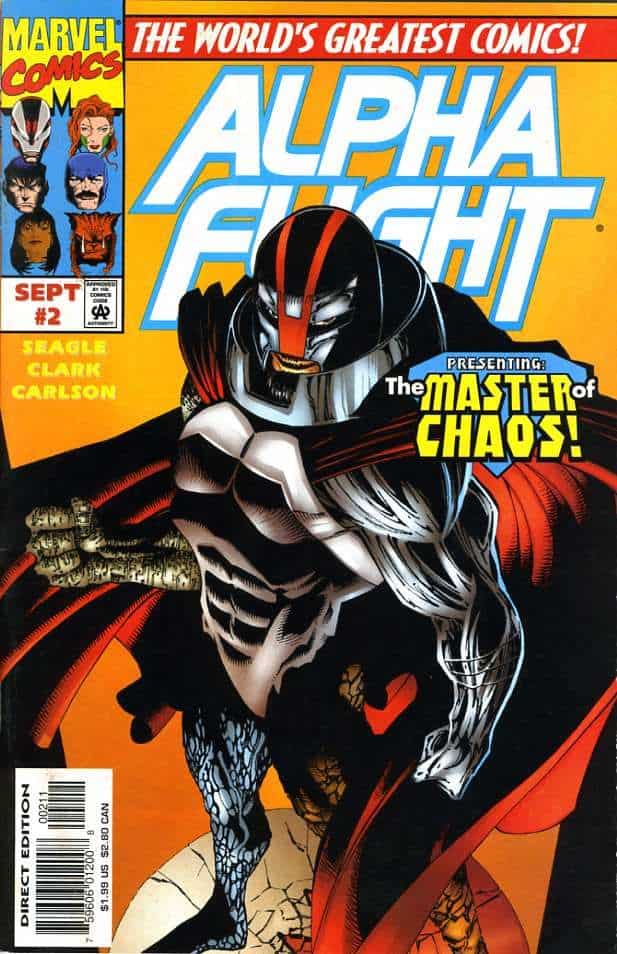 And that’s the end of that run.  It was definitely rushed, because it left a lot of plotlines and mysteries unresolved.  Apparently Madison Jeffries being brainwashed by the Zodiac eventually got covered in a Weapon X series, but I’m not sure if we ever learned what happened to Diamond Lil.  As well, we are only left with a vague sense that Gentry is going to continue to clean up Department H, but we never learn who the Director is, or why he would allow a course correction that’s so drastic.  I imagine if there were more time, or had the series continued, these all would have been addressed eventually, but it leaves too many questions.

I think I liked this run, but not as much as I did when it first came out.  The notion that the true enemy of the team is the government that runs and funds them is an interesting one, and I remember looking forward to seeing the original team return to rescue their friends.  It’s weird that it didn’t turn out that way, or that Puck never recovered his memory that their Sasquatch was never the real deal (that was a cool swerve at the time). Canada is not known for its covert actions, so that aspect could have been explored a lot more. 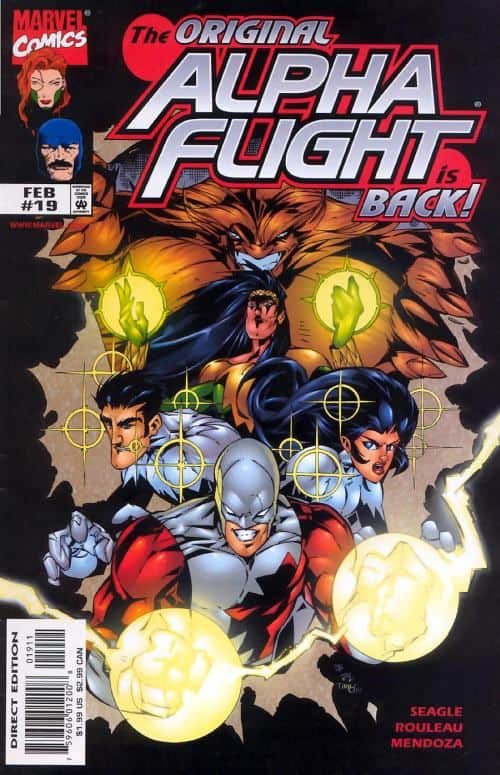 I was a little surprised to see how okay both Heather and Judd are with all of the revelations of the last few issues.  I would have thought they’d be a lot more annoyed, and a lot less trusting of Gentry. I also would have thought that Heather would be a little more confused by the appearance of the other Guardian.  Let’s take a moment to check in on all of the characters.

Vindicator – In the past, Heather was the heart of the series, and Seagle often tried to maintain that, but not consistently.  She is given a weird suit that is never fully explained, and where in the early issues she consistently pushes against Mac, that kind of peters out as the run continues.  Also, as much as I like Rouleau’s art (more on him later), I can’t handle her big hair in his issues.

Puck – Puck’s connection to Hull House feels poorly retconned, and then is ignored (as is the whole mystery of how exactly the Department spends years locating and nurturing their Legacies).  His love of Heather comes and goes as it pleases, and while he’s suspicious of Clarke, he can’t help but become nurturing of the younger team members. I like the way Rouleau draws Puck – he looks like he belongs in Super Mario Brothers, but it fits the character just as well as Byrne’s original designs.

Guardian – The de-aged Mac (who is really just a clone) is an intriguing character, as he tries to be someone he isn’t, based on possibly faulty implanted memories.  It makes him pretty interesting, but he’s also portrayed as pretty juvenile. It’s an interesting dynamic, especially during the brief fling he had with Murmur.

Radius – Jared became the most memorable new character in this run.  His difficulty as a teammate, and the way in which his forcefield played up his social isolation worked really well, as did the haphazard way in which he tried to establish himself on the team, and to work through his guilt around Sasquatch’s death.  We saw that he needed a special device in order to eat, but we also saw him change outfits often; I think some more explanation of how his powers worked was needed. Sadly, he’s not been used much since this run ended.

Flex – Adrian really grew on me as a character who doesn’t feel like he belongs on the team, and who is always scared of everything going on around him.  I liked seeing him gain some confidence, and some independence from Jared’s shadow. We never did learn who his father was, which might have been interesting, and we also never saw him again past one or two appearances in other books.

Murmur – Arlette never really did much for me.  She basically has Purple Girl’s powers, and spends much of the run completely sidelined.  It’s like she’s there to fill Aurora’s usual role as team sexpot, and that’s about it.

Manbot – Is there a worse character than Manbot?  He’s basically R2D2 with giant legs and a human face, and often appears to have been forgotten by Seagle or the artists.  For a while, we were told he was a person, but as the run continues, we learn he is a robot. His abilities seemed to fluctuate with whatever the story needed, and really, he was just a lumbering plot device.

Sunfire – I can’t figure out why Sunfire was ever included in this book.  For issues he was a prisoner, then he apparently joined the team, before leaving again.  It felt like filler.

Ghost Girl – I had a hard time understanding the change in Lilli.  For months, we watched her try to escape the Department, but as soon as Gentry showed up, she was happy to be there.  It was suggested that General Clark was having her undergo some conditioning, but it was never made clear. As well, it was strange that two other trainees were introduced and then never returned to.

I think that much of my original enthusiasm for this title came from the fact that Seagle was trying something new with it.  I’m not sure if this was one of my earliest exposures to his writing – I remember being a fan of his X-Men run that was concurrent with this series – or if I knew from day one that I’d be down for it, but I have always appreciated the way he approaches long-form stories.  I think that, had he been given five or ten more issues in this run, it would have accomplished a lot more.

The art became both a problem and a joy in this series.  I liked Scott Clark’s slim characters, but often found his work inconsistent and hard to follow.  Things like Puck’s headgear looked different from panel to panel, and I never got a sense of just what Manbot looked like.  The fact that Clark didn’t draw the maple leaves on Guardian and Vindicator’s costumes correctly drove me nuts (although at some point it was described in the letters column as being on purpose).  At the same time, he made Murmur and Flex look great, and I liked his design for Mesmero a lot.

Things really changed when Duncan Rouleau came on board.  He’s a much more cartoony, and dynamic artist than Clark, and it felt like the energy in his art gave Seagle a boost of energy and creativity.  I thought it interesting that they began to share the plotting credit, and that they are considered the co-creators of Big Hero 6 (I hope they got royalties off the movie).  I would love to see more comics work from Rouleau today, especially if it meant he’d finish The Great Unknown, the excellent Image comic that started ten years ago but was never completed.

After this run, Alpha more or less went away for a while.  They turned up briefly in a two-part Wolverine story that explained that the trainees were moved to Beta Flight, and that killed off the younger Mac and brought back Snowbird, all rather randomly.  After that, Scott Lobdell was given a short-lived series that featured all new characters, and was trying to be funny. I only read the first issue, and hated it. I’m not going to be reading it for this column.  After that, Brian Michael Bendis killed off the team in his New Avengers run, and then they were brought back to life in an event (Chaos War?) miniseries. They were given another miniseries as part of the Fear Itself event, and it was pretty good, but too new for consideration for this column 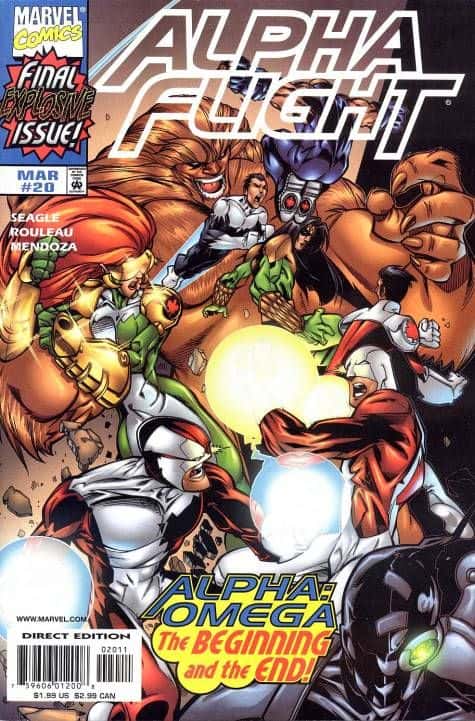 Most recently, Alpha Flight has become the organization run by Captain Marvel, with jurisdiction over near-Earth space.  I still find it weird to see Puck flying fighter craft and doing Star Trek things. Walter is currently showing up in Immortal Hulk, where he is leading a Gamma Flight team to try to deal with the Hulk.  Northstar shows up from time to time in the X-Men titles (as does Madison Jeffries, with less frequency). I don’t remember the last time I saw either Heather or Mac (if he’s still alive – it’s so hard to keep track).  Characters like Talisman, Diamond Lil, and Nemesis seem to be forgotten.

I know that Marvel has announced a one-shot for the fall, made by all-Canadian creators.  I hope that this leads to a new, serious attempt at bringing the team back, but by doing something new with them, not by retreading old stories and situations.  Or by turning them into a bunch of joke characters.

It was nice revisiting these characters and runs, as they meant a lot to me at one point in my life, but objectively, this book never got to be as good as it was during John Byrne’s first twenty-eight issues, and that’s kind of sad.

Next time around I’m going to be looking at a four-issue miniseries that should have been included with an earlier set of columns, as it was a spinoff from a team book I reread a while ago, before I embark on my most ambitious set of columns yet.

If you’d like to read any of the stories I talk about here, you are going to be going through some longboxes.  They haven’t been collected.