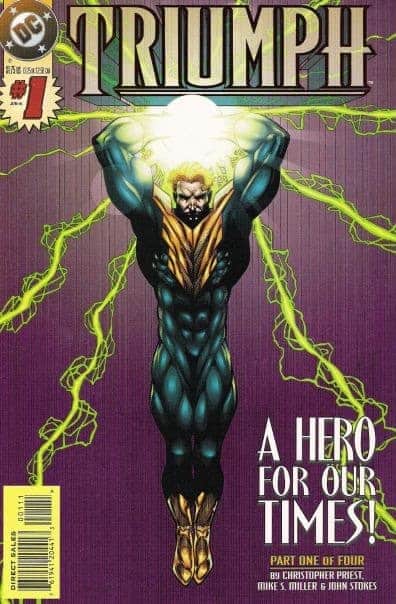 I’ve been using these columns as a good excuse to go through the work of one of my favourite superhero writers, Christopher Priest.  A while ago, I devoted a column to his Justice League Task Force, and another to his Ray.  While reading those books, I realized that I’d ignored a four issue miniseries featuring Triumph, the character that Priest and Mark Waid had retconned into DC’s past, and then had go missing for decades, during which time he was largely forgotten.

Triumph played the Hawkeye role in JLTF; he was arrogant and dismissive, and often found himself in conflict with the Martian Manhunter.  I didn’t ever really like him as a character, but in the interest of completeness (and because I found the full set for a very low price recently) I thought it would be interesting to take a look at what he was like when he was on his own.

This was an odd miniseries, because while it does reveal a little more about Triumph, it doesn’t fit well with his Justice League Task Force appearances, nor does it establish Triumph as the type of character that could sustain an ongoing series.  It makes me wonder why DC decided to publish it.

Priest often constructs his plots like puzzles, and when writing a shorter story like this, it’s a little clearer to see how he works backwards from his intended outcome to fill in his storyline.  A casualty of that is that he’s not always good at introducing characters, leaving it to the readers to figure out who Triumph’s crew are. We never do learn much about these secondary characters, and that makes their parts of the story less impactful.  It’s never made clear how Eddie X would have known to be in the rotojet at the end of the story, or what happens to him or Fang.

I remember seeing these characters show up once or twice in JLTF, but there too, they didn’t have much impact on the story.  It feels like Priest was trying to set up a situation similar to the support network surrounding The Shadow, but doesn’t really get us there.

Artwise, Mike Miller contributes perfectly fine mid-90s art.  He’s a clear storyteller, and avoids many of the excesses of the era to help make the story clear.

Beyond that, there’s not much to say about this series.  I intended this column to be a quick palette cleanser before I launch into a long set of columns that will cover one of my all-time favourite team books, which is set to be revitalized soon in a way that has me very nervous, as it’s a book I miss a great deal, but that is often handled poorly when relaunched.

If you’d like to read any of the stories I talk about here, you are going to have to track it down.  It’s not surprising that this was never reprinted into a trade.