Are you ready to keep enjoying the Summer of Hammer Horror even when it gets into football season? Scars of Dracula with Christopher Lee as the Count arrives on Blu-ray on September 10. This is the last of his films in the role to finally arrive on Blu-ray in the USA. Now you can enjoy his seductive and blood thirsty ways in high resolution. He even has an assistant that’s the second Doctor Who (Patrick Traughton). The bonus features include a commentary track with the late Christopher Lee. Here’s the press release from Scream Factory with all the bonus features: 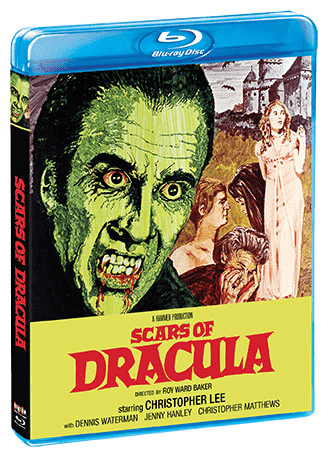 The fearsome Count returns, this time “with (literally) extra lashings of sadism and sex.” – Time Out

The legendary Christopher Lee (Star Wars: Episode II – Attack of the Clones, The Lord of the Rings) is back as Dracula, bringing unspeakable horrors upon a local village that defies his evil reign. But when a young man and his luscious girlfriend unwittingly visit the Count’s castle, they find themselves trapped in a face-to-face frenzy of bloodthirsty vixens, religious blasphemy and sadistic henchmen. The prince of darkness has returned like never before, but will his horrific mark remain forever? On September 10, 2019, SCREAM FACTORY™ is proud to present Hammer horror cult classic SCARS OF DRACULA on Blu-ray™. Directed with bloody bravado by Hammer veteran Roy Ward Baker (Quatermass And The Pit, Dr. Jekyll And Sister Hyde), this 1970 shocker stars Christopher Lee with Dennis Waterman (The Sweeney), Jenny Hanley (The Flesh and Blood Show, The Persuaders!), Christopher Matthews (Doctor Who, EastEnders), and Patrick Troughton (Doctor Who, The Omen). A must-have for movie collectors and horror enthusiasts, this definitive Blu-ray edition contains special bonus content and is now available for pre-order at ShoutFactory.com.