Frank LaLoggia is one of those indie directors who made his movies at his hometown instead of running off to Hollywood. In 1981, he brought Rochester, New York to the big screen with Fear No Evil. The movie mixed horror with religious belief with a battle between archangels and devils. Previously his Lady In White also made in Upstate New York was released by Scream Factory. Fear No Evil is scheduled for Blu-ray in September. Here’s the press release from Scream Factory: 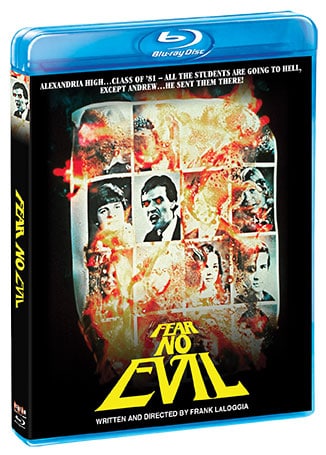 God has appointed three archangels to fight against Lucifer, who has assumed human features. Archangel Raphael, in the guise of Father Damon, kills Lucifer and ends his life in jail. But his sister, Archangel Mikhail, knows that one day the Devil will reappear. Eighteen years later, Lucifer returns, now in the form of Andrew, a brilliant but shy schoolboy at Alexandria High who becomes conscious of his devilish nature on his birthday. Archangel Mikhail, allies with Gabrielle to defeat Lucifer in this “remarkably assured, personal and powerful film [that] is never less than gripping” (TV Guide)! On September 24, 2019, SCREAM FACTORY™ is thrilled to present supernatural horror cult classic FEAR NO EVIL on Blu-ray™. Written and Directed by Frank LaLoggia (Lady in White), the film stars Stefan Arngrim (Strange Days, The Final Cut), Elizabeth Hoffman (Stargate SG-1, Dante’s Peak) and introducing Kathleen Rowe McAllen (Aspects of Love). A must-have for horror enthusiasts and movie collectors, this definitive Blu-ray edition contains new interviews and special bonus content. Pre-order is available now at ShoutFactory.com