…To His Son Jericho With A Terrible Price?!

…the Legion of Doom’s Apex Lex Luthor offers a dark gift to his son Jericho Joseph Wilson instead.

It would give him all the powers he has via is Ikon Suit internally meaning he could have super powers without wearing the costume which also has some kind of nanotech repair ability now too.

It also means his telepathic abilities have been enhanced where he can control minds now too.

Jericho is looking for his sister Ravager Rose Wilson and he goes to see his secret agent mom to find her. They figure out a way to find Rose, but we also learn the terrible price Joseph paid for his new powers; he’s been disfigured. Its almost like his skin is gone he’s just covered in his muscle, but it’s blue.

Jericho tracks down Ravager and tries to subdue her because he doesn’t want to her to kill Red Arrow; he even accepts his blame in his dad’d death. Jericho attempts to use his heightened mental abilities on his sister…

…but there is massive feedback. 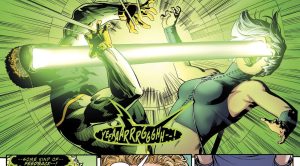 In a roundabout way of presumed flashbacks and soliloquies we learn that his powers are manifested from a time-space quantum singularity that Jericho can now manipulate.

The book ends with Jericho pleading with his boyfriend not leave him and promising he’ll give back these new powers to the Legion of Doom. That’s no enough for Terrance who attempts to walk out on Jericho, but he uses his new powers on his boyfriend to make Terrance stay and make him love him?! Jericho may prove to be an interesting villain out of this despite his long history as a hero.

The book ends with a corpse in Jericho’s apartment?

A roller-coaster ride with no Deathstroke in it, but it was a realization I only came to at the end of the issue after enjoying the literary ride. Great art too. Very entertaining. Probably the best “dark gifts” issue of DC’s Year of the Villain with an extended Apex Lex Luthor appearance embedded as part of the story not as a two-page ending alone. 9 out of 10.