WWE Hall Of Famer Trish Stratus Talks SummerSlam 2019 Match With WWE Superstar Charlotte Flair! At 43, Is This Her Last Match Before Retirement?

Stratus spoke to a local newspaper and here’s some of her words:

“As you get older, you decide this is it. I don’t need to keep coming back. I’ve had my ride. But this scenario was so special. To face a superstar like Charlotte Flair at this point of my life. In Toronto. At the second biggest pay-per-view of the year (WrestleMania is first). What could be more right?”

“To face the greatest of her generation — and it’s been argued that I was the greatest of my generation — it’s a pretty unique matchup. Everything is aligning for this and with my age — how much longer can I do this or want to do this? This is the perfect time to do it”… 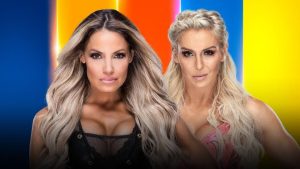 …“There’s a lot of buzz about the event, about my match. Personally, I had to dig deep to find my inner-Trish Stratus again. I had to do that. I’m a mom now. ‘I’m a bad-ass mom,’ I keep telling myself. I had to find that inner fire in me.”

“You think, ‘Can I do it? Am I able to do it?’ I watch the tapes (of training) and I see it coming together. It’s like my brain is two steps behind my body, but then your body surprises you. And you think, ‘Holy smokes, after two kids and all these years, I can still do this.’”

“Sometimes I don’t know how I’m doing all of this. Being a mom, running a business, it takes crazy time-management. Now you throw in training and preparing for this. It’s been a lot. But it’s been fun. I feel like I’m doing this for the moms out there. For every mom, maybe, who’s lost themselves. I had to find that bad-ass wrestler inside of me. It took some time to get there”…

The newspaper calls this her retirement and last hurrah, but those words are never quoted as being from Trish Stratus. However, on social media she was more direct.

That’s a wrap on media day #1! First flight out of Detroit then hopped right into media talking about taking on @MsCharlotteWWE in my FINAL match this Sunday … now on my way home to my littles!!! #SummerSlam @ETCanada @globalnewsto @CherylHickeyETC pic.twitter.com/21e9ZSfXF3

That’s a wrap on media day #1! First flight out of Detroit then hopped right into media talking about taking on @MsCharlotteWWE in my FINAL match this Sunday … now on my way home to my littles!!! #SummerSlam @ETCanada @globalnewsto @CherylHickeyETC