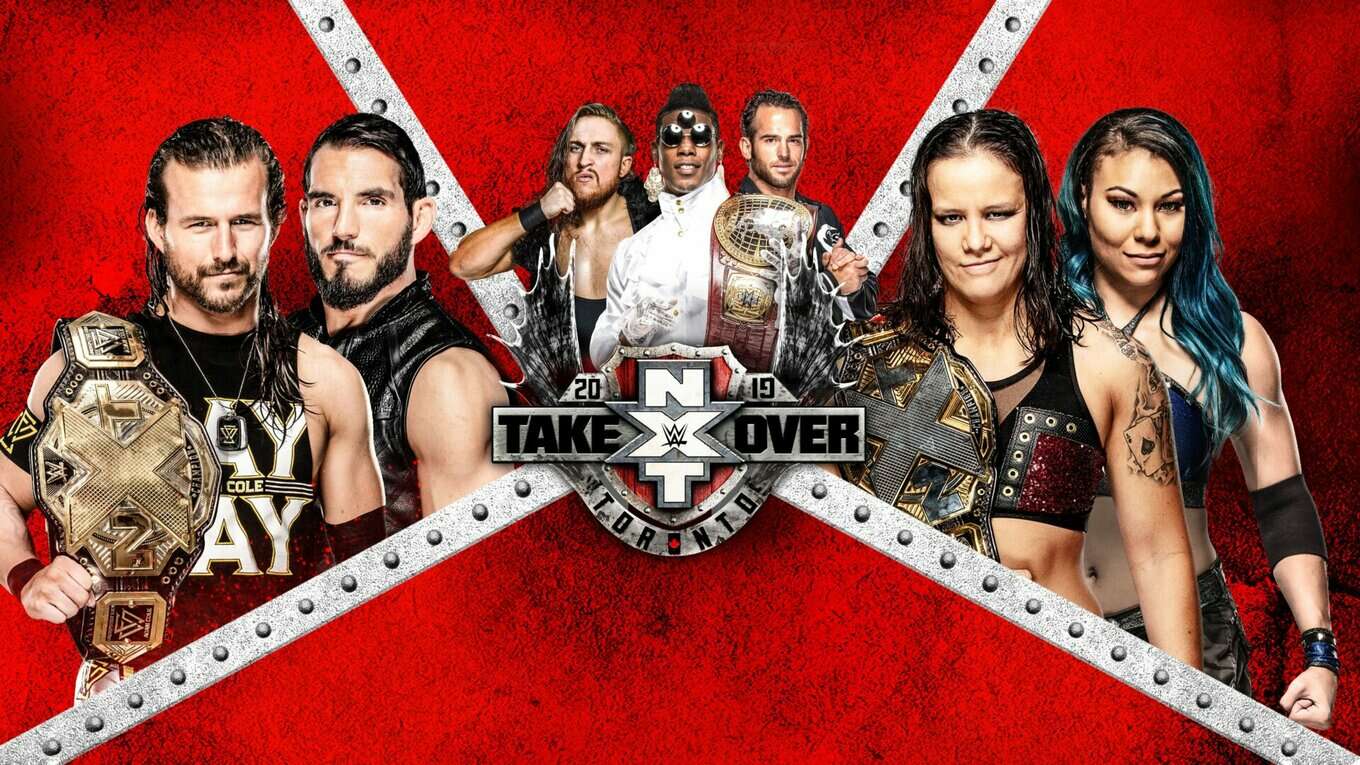 Can I just say, before I start this, that I was actually looking forward to this show. Only one match on the card was leaving me cold, but the rest I sort of assumed would be worth catching.

So, having said that, how did it stack up?

This is NXT TakeOver Toronto and so we are live from… Toronto, I guess.

1. The pre-show was more like a genuine sports pre-show in that they talked about the upcoming matches and that was all. No special bonus match, nothing like that. Just half an hour of talking heads.

2. We open the show proper with the tag team title match – Street Profits (c) v the Undisputed Era. A good standard tag team wrestling match, and done in a way that was actually entertaining. And the last five minutes was just awesome. Almost twenty minutes of goodness saw the Street Profits retain. That was a great way to start the show!

3. After a really good hype video, we have Io Shirai v Candice LaRae. Holy sh*t! Less than 3 minutes in and Candice is suplexed onto the announce table! And it did not let up from there. One of the best women’s matches I have seen in a long time! Avalanche Spanish Fly from the top rope! WTF?! After about 15 minutes Shirai won with a Koji Clutch that put Candice to sleep. Wow! That is a lot to live up to! There was no cheating, nothing untoward, just 2 women beating the living sh*t out of one another.

4. Matt Riddle comes out of the crowd, he demands Killian Dain come fight him, Dain also comes out of the crowd, and… well, we have a non-match brawl. They go at each other – and the officials – until Dain gets Riddle on his back and drops down onto two conveniently set up tables, taking out an official at the same time. That was actually quite good.

5. North American Title next – Velveteen Dream (c) v Roderick Strong v Pete Dunne. I think making it a triple threat helped hide what I don’t like about Dream. It was fast-paced and the amount of near-falls and pin breaks was amazing. Dream retains after about 15 minutes. Look, match was fine, but I am still not a fan of Dream as a worker. However, Dunne has something awesome, and I like Strong, so 2/3 of the match was definitely fine.

6. Women’s Title: Mia Yim v Shayna Baszler (c). Heel v heel match, to all intents and purposes. Some nice moves and not a bad match by a long stretch, but after everything else on the card so far, it felt like it lacked something. Having a crowd not really into it certainly didn’t help, and some dodgy selling hurt as well. Baszler won after 15 minutes with a triangle choke using her legs to retain.

7. I have a problem with most of WWE’s announcing and interviewers, etc. But the three announcers here – Mauro Ranallo, Nigel McGuinness and Beth Phoenix – did their job well. McGuiness has some great knowledge, Phoenix knows her stuff, and while Ranallo sounds like Scott Hudson and sometimes talks too much, he is generally not overbearing (“Mamma mia!”).

8. Heavyweight title match – 2 out of 3 falls – Johnny Gargano v Adam Cole (c). Fall one is a pure wrestling match, as chosen by Cole. A good wrestling match, with some nice working on the knee by Gargano and consistent selling by Cole, then we had near falls all over the place and the crowd and everyone else was into it. Just intense. The ending even told a story – Cole won by DQ after 20-odd minutes, when Gargano used a chair, designed to give him an advantage going forward. Just amazing.

9. Fall two is Gargano’s stipulation – a street fight. This is a match where colour is so needed. Through the crowd and Gargano is on top nearly the whole time as they demolish barricades, announce tables and everything else. End of the fall comes when Gargano lawn darts Cole into a chair set up in the corner, then locks in the Gargano escape for the submission win, tying it up at 1-apiece after almost 10 minutes.

10. Fall three is William Regal’s stipulation – the Ambrose Asylum, a barbed wire topped cage filled with weapons. These two tried to kill each other and themselves. The moves were insanely stupid and yet thrillingly watchable. There were moves taken from heights and near-falls galore and shots that just looked painful… but it needed blood. “Fight forever!” indeed. After over 20 minutes, they were fighting for a piece of barbed wire, fell through two tables set up in the ring, and Cole managed to get his arm across Gargano for a 2 falls to 1 victory.
Well, that concludes a trio of fantastic matches. I can’t pick if this or TakeOver New York was the best match of the trio, but they were all magnificent examples of wrestling. These two have insane chemistry. We have been spoilt in 2019.

(I said it before, I say it again: what happens when these guys go to the main roster? The best 3 shows from WWE this year have all been NXT shows, and yet when the wrestlers reach Raw/SD they lose their specialness. What is going on there?)

What a F*CKIN’ AWESOME SHOW! This was intense and this was great, and you need to catch it if you are a fan of wrestling as opposed to Sports Entertainment. Wow. I mean… wow. SummerSlam has a lot to live up to.

What did you all think? Sound off below!