Chuck Berry was rock and roll. Besides selling millions of records, he was able to sue the Beach Boys and The Beatles for plagiarism. Chuck original hits were the part of the bedrock that inspired generation of musicians including the Rolling Stones (which I don’t think he sued). He probably had most of generations play with him. For decades when Chuck Berry went on tour, the concert promoter had to pay Chuck and provide a back up band. If Chuck liked the band, he would pay them at the end of the show. If he thought they were barely passable, they had earned the honor of saying they’d once played with Chuck Berry. Chuck Berry: Hail! Hail! Rock and Roll (Collector’s Edition) has Chuck with perhaps his finest backing band. The concert film had a very special night with Keith Richards’ rounding up his pals to pay tribute to their inspiration. Now the night is bring brought to Blu-ray with plenty of bonus features about the legendary night. Here’s the press release from Shout! Factory: 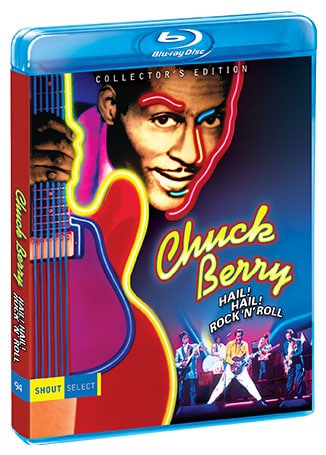 Los Angeles, CA – Shout! Factory pays homage to a legend with the November 19 Shout Select release of Chuck Berry: Hail! Hail! Rock ‘N’ Roll (Collector’s Edition) on DVD, and for the first time ever, on Blu-ray™.

The unforgettable life and music of legendary rock pioneer Chuck Berry are celebrated in this landmark feature film, capturing a once-in-a-lifetime gathering of rock ‘n’ roll’s finest! In 1986, Keith Richards invited a roster of brilliant musicians to honor Chuck Berry for an evening of music to commemorate Berry’s 60th birthday, including performances by Eric Clapton, Robert Cray, Linda Ronstadt, Etta James, and Julian Lennon, along with archival footage of an unforgettable duet by Chuck and John Lennon!