Bane is victorious? One of his victories is depicted in Batman #77 below.

He kills Alfred Pennyworth, Batman / Bruce Wayne’s father figure! This is the biggest death in DC since Death of Superman in 1992 / 93! Wow.

Plus Damian Wayne Robin is now a hostage for the Flashpoint Batman and Bane! 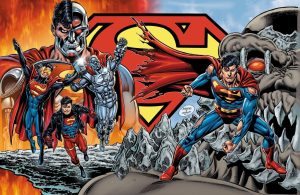 This death only goes further to reinforce my view that part of this arc is either (1) a dream which would also explain how the Thomas Wayne Flashpoint Batman just popped up in the book with no explanation or (2) the end of Doomsday Clock will retcon all this away since it already has to deal with the lack of diversity in the original Legion of Super-Heroes (LOSH) already seen in Doomsday Clock vs. the current diverse LOSH: Millennium roster.

The earlier page was leaked on social media yesterday, but we chose to cover this first thing on New Comic Book Day.