New Super-Hero Team Rises From Ashes Of A Fan Fave Roster That Even Made It To TV?!

This builds on the earlier tease by the House of the Mouse. 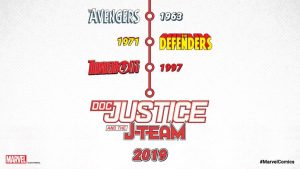 Here’s what Marvel has now announced!

A New Era for the ‘Runaways’: Introducing Doc Justice and the J-Team

The team becomes costumed crimefighters in a story starting with ‘Runaways’ #25 on September 25!

Face front, True Believers, and prepare to meet Doc Justice and the J-Team!

On September 25, one of the mighty Marvel Universe’s most beloved groups starts a new journey under a fresh moniker in RUNAWAYS #25!

“We started mapping out the latest arc of RUNAWAYS, issues #25-30, and we thought about one of the things that this series does best is take a classic Super Hero comic idea and subvert it, do a Runaways spin on it,” explains Lowe. “From classic moments in the original Brian K. Vaughan-Adrian Alphona run to stuff in the more recent issues, so much of this series is about subverting those Super Hero expectations and ideas.

“And something that Super Hero comics do is a big costume change or a name change, and Rainbow had the idea for Doc Justice and the J-Team—this venerable Los Angeles hero who’s without his support team. And maybe the Runaways become that! So what we’ve got coming up is Doc Justice recruiting the Runaways, and they’ve never done anything like this before.

“For as much as RUNAWAYS is a Marvel comic, as much as they’re super-powered characters,” Nick continues, “they’re not Super Heroes. They never have been. They’ve done things to help people, heroic things, but they’re not Super Heroes; they don’t go on patrol. So you’ll see the start of it all in issues #24-26, but things really start happening in issue #27… And we have a guest artist for that (who’s not really a guest) because Kris Anka is back for an issue! He’s coming in for RUNAWAYS #27 to help us mint the group as the J-Team. We’re super glad to have him.

“This arc is gonna go places you will not expect it to go. If there’s one thing you know about RUNAWAYS, it’s that it will surprise you at every turn…”

Pre-order RUNAWAYS #25 at your local comic shop now! Then prepare for Doc Justice and the J-Team, coming in RUNAWAYS #27!

Runaways #27 lands in stores in November 2019. However, the journey begins next month!