Can we talk about the joy of discovering The Ramones? Back in the ’70s, the Ramones were still an unknown force for people outside of major cities. You weren’t going to hear them on a rock radio station that thought the Molly Hatchet was new wave. MTV hadn’t happened yet. There was a massive shortage of cool in high schools. Eventually you’d see something in an edgy music magazine at the mall newsstand. Who were these four guys in bowlish haircuts, leather jackets and ragged jeans? What did they sound like? All those questions were answered when Rock ‘N’ Roll High School popped up on cable. For quite a few kids, this was the day punk rock truly arrived in their towns. The film was kinda goofy with its tale of their number one fan getting them to come to her school. But it delivered on the music especially the theme song. Now the movie is getting a serious upgrade thanks to the Rock ‘N’ Roll High School: 40th Anniversary Edition Steelbook. You won’t care about history as you get caught up in the Ramones-mania. Here’s the press release from Shout! Factory with all the bonus features: 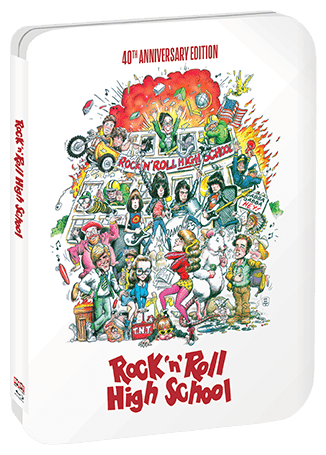 With explosive musical performances from the Ramones, the outrageous candor of teenage angst and nostalgic reverie of a counterculture rock movement, Rock ’N’ Roll High School has captured the hearts of many generations.

Based on Arkush’s own high school fantasy, the 1979 cult film takes place at Vince Lombardi High School — the wildest, most rockin’ high school around! That is, until a thug of a principal, Miss Togar, comes along and tries to make the school a totalitarian state. With the help of the Ramones, the students of Vince Lombardi battle Miss Togar’s iron-fisted rule and take their battle to a truly rockin’ conclusion!

Rock ’N’ Roll High School quickly developed a devoted following after its release in 1979 and became a mainstay of the midnight movie cult circuit. As with films like The Rocky Horror Picture Show, audience members began to dress up like the cast and the Ramones for screenings.

Arkush, a self-described “unabashed rock ’n’ roll fanatic,” chose the Ramones to star as the film’s musical heroes, as he felt they epitomized pure rock ’n’ roll. As Arkush remembers, “We staged a live, marathon show at the Roxy Theatre that consisted of 22 hours of nonstop Ramones,” and the tireless quartet also wrote two songs for the film: “I Want You Around” and “Rock ’N’ Roll School.” The Ramones were fans of Corman as well. Johnny Ramone said in an interview at the time, “When we found out Roger Corman was behind the picture, we said, sure, we’ll do it because we knew he had a reputation and we knew he made good movies.”