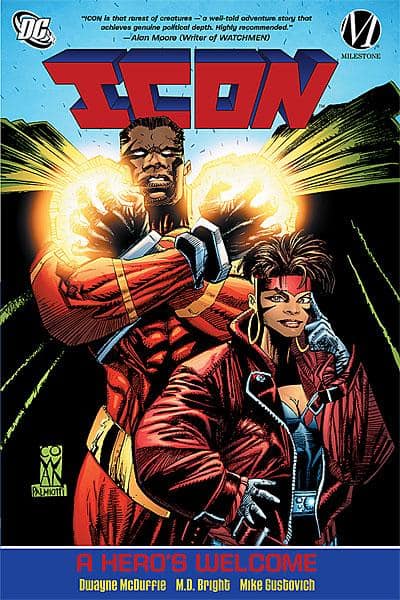 Spoilers from twenty-six years ago

I’ve become more curious about the Milestone books in recent years, having never read them when they first came out, in the middle of the great 90s glut.  I didn’t much like Hardware when I read its first trade recently, but Xombi was a great series, and I’d like to sample more of the titles.

Going into this trade, I know nothing about Icon except that he looks like a Superman retread.  I’m curious to see how the politics of representation play out with this character in this trade that collects the first eight issues.  Let’s find out.

I like this trade much more than I did the first trade of Hardware.  We are slow to learn about Icon, but Raquel is an incredible character who propels this book with her sense of justice and unflagging optimism and energy.  She has a way of cutting through problems and posturing, to get at the core of what needs to happen.  I’ve always liked McDuffie as a writer, but feel like he tapped into something next level with this book, which must have felt very unique when it came out.

Icon is an interesting study in contradictions.  Basically, he’s Superman, were Superman raised as a slave in the 19th century.  Yet, after all of his life experiences, Icon subscribes to a “pull yourself up by your bootstraps” school of respectability politics.  He lives alone in a mansion, and has somehow missed out on seeing how people of colour have faced systemic discrimination in American society.  Even after touring Raquel’s neighbourhood or hanging out on Paris Island, Icon lectures purse snatchers for preying on the weak, and shows naivety when interacting with the police, expecting them to be happy receiving his aid.

But then, when Raquel wants him to help her get an abortion, he’s okay with it and supportive of her.  Maybe these first eight issues of a series that ran more than five times that long are not enough to fully understand this character, but that is also the biggest reason I have to now start seeking out the rest of this series.  I want to see if he starts to recognize forces that work against certain communities, or if he continues to blame people for their choices.

Raquel is great, and I was pleasantly surprised by the nuance and complexity of how the issue of her considering an abortion is handled.  I assume that’s largely due to the co-writer of issue seven, the one that has a doctor speaking plainly about both abortions and the law. Nothing about this issue feels preachy or heavy-handed, and the reader can empathize with the difficulty of what Raquel has to consider.

Even though in eight issues Icon only deals with one real antagonist (and even he turns out to be a decent guy who was caught in a bad situation), I’m curious to see more of a how a character like him, as much an out-of-time Captain America type as a Superman, interacts with the 90s, and the gang culture that seems to have taken hold in Dakota City.

I find myself more and more intrigued by the Milestone line.  Sure, Hardware didn’t work for me when I read his first trade, but the appearance of the Blood Syndicate in this trade has me wanting to check out their own title (I have the Wise Son mini in a pile somewhere, but haven’t looked at them past that).

MD Bright’s art is well-suited to this book, although the 90s cape on Icon makes me laugh at times (especially given how much it appears to change in size and volume throughout the run).  I love the colouring system used on Milestone books, that stayed pretty consistent even though there were a number of colourists on these eight issues.

I will definitely be adding the rest of this series to the list of comics I’m hunting for at shows and sales, so you can expect another column on this some day, but I can’t predict when.

In the meantime, you can check out my Retro Review archives here.