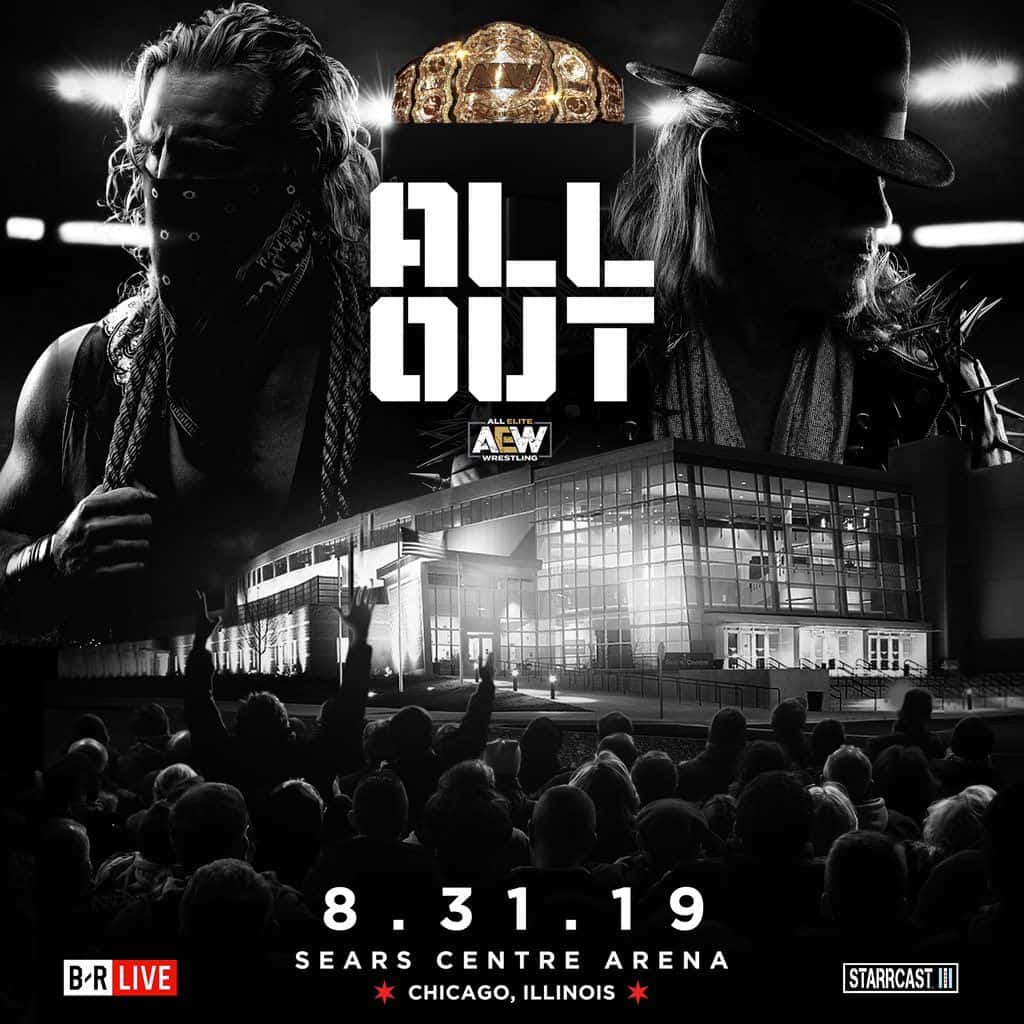 I missed the pre-show, though I’ve been told that it might not have been worth tracking down.

1) SCU (Christopher Daniels, Frankie Kazarian & Scorpio Sky) v Jurassic Express (Luchasaurus & Jungle Boy & Marko Stunt)
Luchasaurus and Jungle Boy (Luke Perry’s son… no, really) are so over it is insane. But this opening match was just a whole lot of fun and really worth seeing. They should just have SCU open every PPV and be done with it. Seriously. And “a small boy, a boy, and his dinosaur”, the glass of water, I love the Jurassic Express. (I am such a mark!) This was just a fun, fast-paced 10 minutes. This is how you want to open a PPV. The ending came when a double BME was hit leading to a Kazarian pin on Stunt. Luchasaurus looked like a huge star here, but I think his lack of speed would see him exposed in singles matches.

2) Pac v Kenny Omega
I thought we were supposed to get Jon Moxley? Well, Moxley’s mentioned, so maybe it’s an injury thing. (Edit: apparently he has MRSA and so has to lie low for a while.) This was a really strong 25 minute match. These two put forth a professional wrestling match that felt like a real fight. Sure, there were spots, but it had a good feel about it. Ending came when Pac locked in the Brutalizer out of a one-winged angel attempt by Omega, so Omega was standing… and then Omega tumbled over and the hold stayed there until Omega passed out. Wow! This was f’n awesome! Pac looks like he’ll fit in nicely. 2 for 2 on the matches so far!

3) Cracker Barrel Challenge: Darby Allin v Jimmy Havoc v Joey Janela
Okay, I am not a real fan of hardcore matches. Some are fine – ECW had a few that were okay, WCW had some that were good (Cactus Jack v Nasty Boys/Benoit v Sullivan…but WCW’s also had wrestling) – but many are just “I hit you/ You hit me/ We’re a dysfunctional/ Family” sort of weapons shot, wander around, weapon shot… They’re crap. Sorry, but staple guns? Taping thumbtacks into a mouth? No. The problem is, I couldn’t stop watching. I was mesmerised by their insanity. Papercuts? A monkey flip to land in a chair? Tack-covered skateboard? A real cracker barrel? But, really… no. Havoc won after 15 minutes. That’s it. What a bizarre f*ckin’ match.

4) The Dark Order (Evil Uno & Stu Grayson) v Best Friends (Trent Baretta & Chuck Taylor)
This match didn’t do it for me. The Dark Order’s whole thing just feels derivative of so many other cult-like tag teams, and their moves are nothing spectacular. Best Friends are all right, but they didn’t have much to work with. Dark Order won after 12-odd minutes when they hit a decent double team move called the Fatality on Trent. Then some guy named Orange Cassidy (?) took out the ‘Creepers’ without taking his hands out of his pockets. That was the best bit of the match. As Excalibur said – lots of trios on AEW. 6-man titles?!

5) HIkaru Shida v Riho
Winner to face Nyla Rose (who won a battle royal on the pre-show) on October 2 for the AEW Women’s Championship. This was perfectly fine. Good wrestling, nice moves and they played their roles perfectly. After some of the recent “challengers” in WWE (though I did really enjoy Nattie v Becky), it was so good to see 2 women wrestling who looked like they belong in the ring. The striking looked hard, the selling was well done and it was a good match. Riho won after almost 15 minutes with a sort of crucifix into a spinny thing for the pin. Nice.

6) Shawn Spears (with Tully Blanchard) v Cody Rhodes (with the cast of a bad Star Trek Parody MJF)
Is this heel v heel? I is confused… mind you, I was also the one who said that heel/face dynamics don’t need to be in wrestling anymore, so I’ll shut up about now. It started off well, but then it degenerated into something a little bleh, and then it finished amazingly with Arn Anderson (wow… he’s… big) coming down to hit a AA Spinebuster ™ on Spears to the biggest pop of the match, then leaving with Tully following in disbelief (good cornerin’ there, Tully!) , and Rhodes hitting flip flop fly, disaster kick into a chair and then cross rhodes for the pin at about quarter of an hour.

7) The commentary team of Jim “JR” Ross, Excalibur and some guy called Goldenboy were really good. They called the moves their correct names, corrected themselves when they made mistakes, had gentle jokes, put over the matches and what we were seeing. They did NOT play heel/face characters, argue with one another at the expense of the matches, and make lame jokes that meant nothing. You want one of the biggest differences between AEW and WWE? That’s it.

8) AAA Tag Team Titles, Ladder Match: Lucha Brothers v. The Young Bucks
When I heard there was going to be yet another match between these 2 teams, I groaned. Then I heard it was going to be a ladder match. Okay, I’m up for that. Holy f’n sh*t! What a match! Look, it was not as good as Double or Nothing, as they repeated some of the same spots and some spots looked more set up but it was still such a cool spectacle. Nearly 25 minutes of insanity. So, yeah, I enjoyed this. Ending came when the Lucha Brothers climbed together to retain the titles. And then another masked team (Point Break president masks) came in and took out all 4 men, revealing themselves to be Santana and Ortiz, who are apparently known to these people.

9) AEW World Title: Adam Hangman Page (with horse) v Chris Jericho
This was not a bad match, but it was long (almost half an hour) and it felt long. There were too many down periods. Having said that, they looked like they wanted it and they looked like they were fighting for something important. And the fact that Chris Jericho got the title means, to me, that AEW made the right choice. I think there is more money in the chase for everyone else, against the wily veteran. He bled for it, and it looks like it means something to him. It was, for me, a feelgood ending.

(9a. We had the first woman to officiate a main event PPV title match. That’s actually cool.)

10) So… the show. Some great matches, but nothing really blowaway. It was long. Some matches were dull and too long. It was a good show, but Double Or Nothing still stands as AEW’s pinnacle thus far.