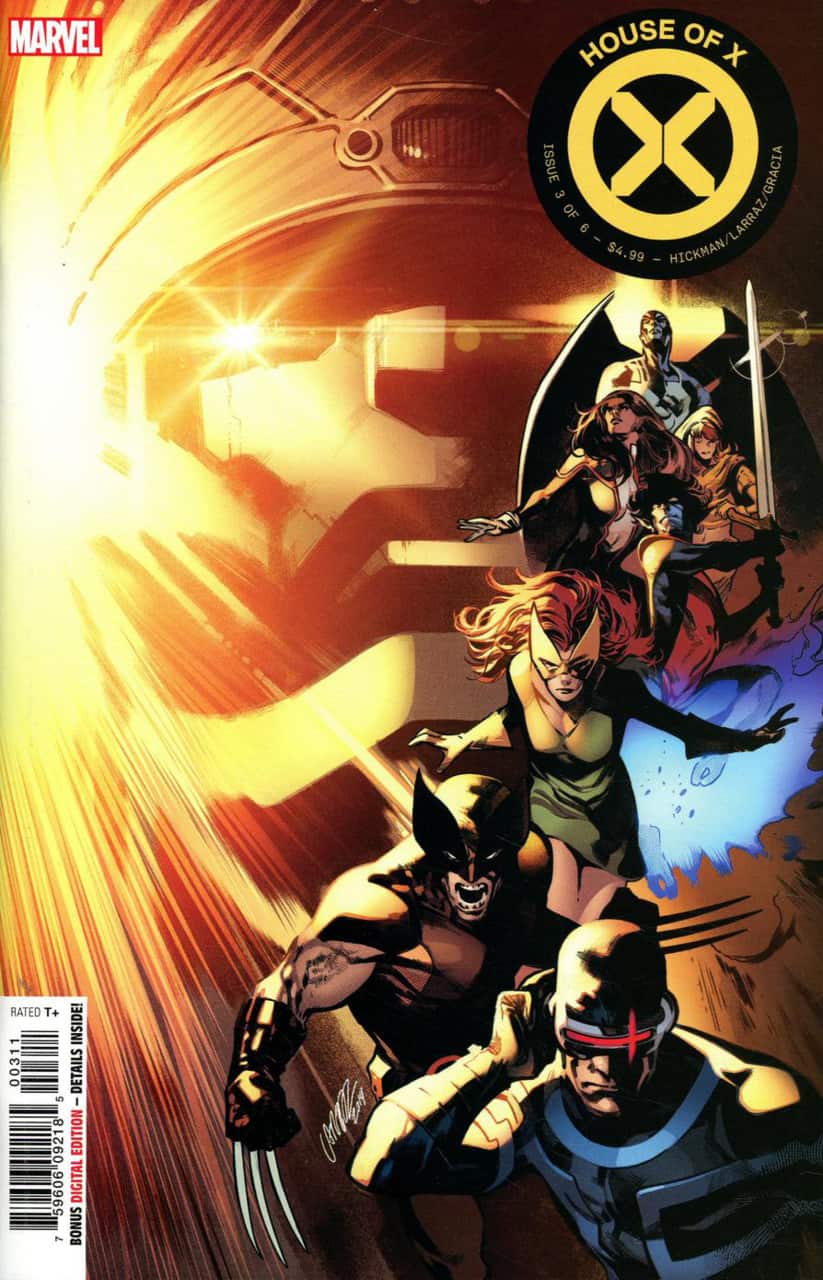 House of X #3 – We’ve reached the halfway point of Jonathan Hickman’s introductory X-Men event, and have, for the first time, a more or less conventional X-Men comic.  Cyclops takes a team to stop the Mother Mold Sentinel factory from constructing the first Nimrod, while the White Queen flexes the Nation of Krakoa’s diplomatic muscle to get Sabretooth sprung from American custody (although it’s not clear why they would want him yet).  If this is how the regular X-Men title is going to play out, I’m happy. Sure, this issue doesn’t give us a lot of new information regarding some of the surprises or secrets that Hickman has woven into the story, but it does give us a solid superhero issue that still has space for lots of other Hickman stuff.  I also like the way Hickman picked the squad that Cyclops assembled – it’s good to see some lower profile characters like Monet and (I think) Husk getting some screen time.

Ascender #5 – Andy’s reunion with Telsa doesn’t go all that great, as he works to get his daughter and Bandit off world before getting caught by Mother’s followers.  This series, which follows on the excellent Descender, is well-paced, and thanks to Dustin Nguyen, gorgeous. 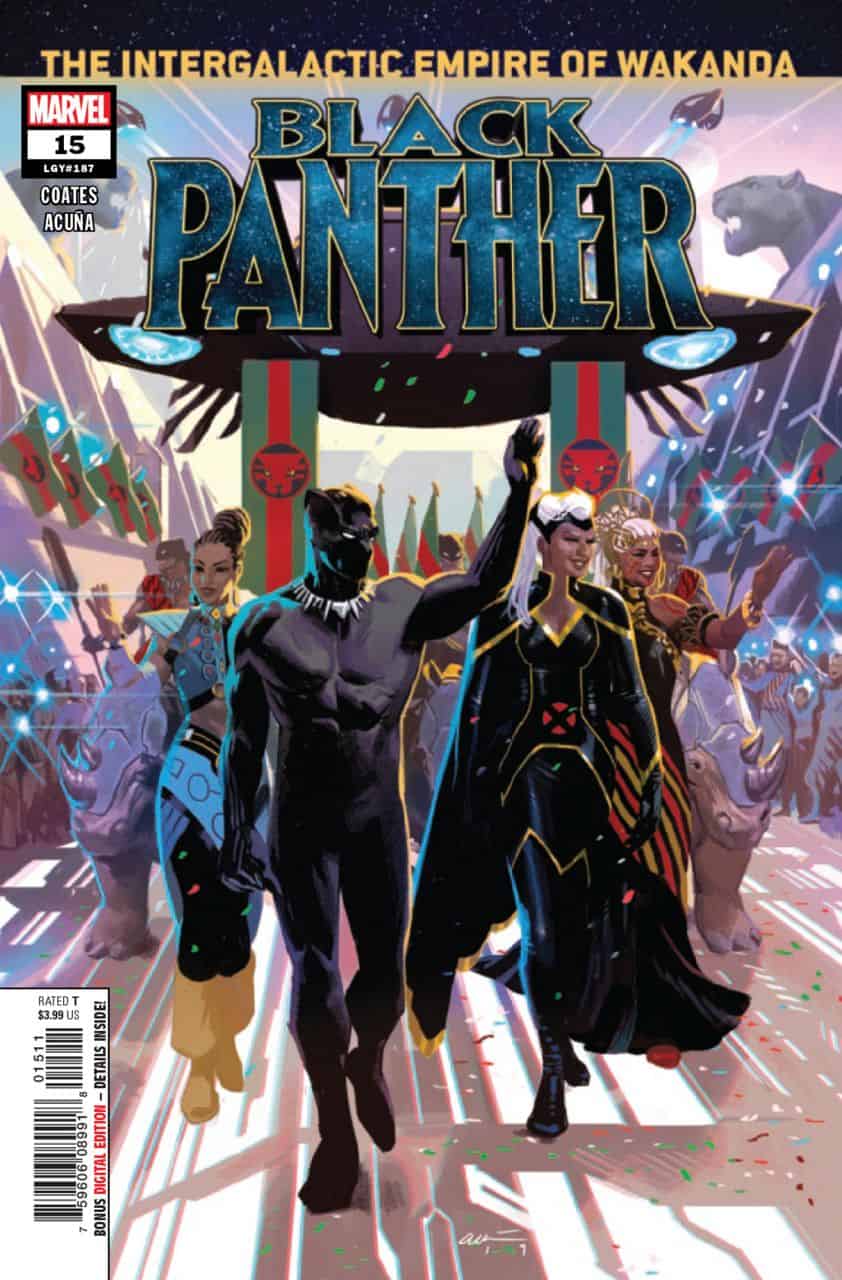 Black Panther #15 – T’Challa finally returns to Earth, and we get a better understanding of how the Intergalactic Wakanda came about.  It’s nice to see the king with Shuri and Storm again, and I’m left curious as to where things are headed. Daniel Acuña’s work on this series is lovely.

Black Science #42 – This is the second last issue of this long-running series, which at its core, comes down to the conflict between Grant and Kadir, rivals since the very beginning.  I’m going to miss this comic when it finishes, but have also found it to be dragging a little towards the end. There’s a parallel structure to this issue that I found a little confusing.

Captain America #13 – Ta-Nehisi Coates has a scene in this issue where Cap addresses anti-immigrant sentiment, but feels conflicted by the fact that the people being targeted by a killer militia are also breaking the law.  It rings a little false, since the militia are killing people. I feel like he’s walking a thin line, being sure to tell a story that reflects current day America, while trying to find something for more conservative readers to latch onto.  I feel like Mark Gruenwald’s Captain America would have had no doubts about what to do here, and I’m surprised to see a little waffling from Coates. At the same time, he then recognizes some of the great hypocrisies of the Second World War, so it’s just a passing moment.  I think this book is picking up, and I like that it makes use of characters like White Tiger, who we never get to see.

Killers #2 – We meet some more former ninjas (basically, G-J) as they plot and scheme against each other while also appearing none too eager to actually help the Jonin.  The former ninjas was a very cool addition that Matt Kindt made to Valiant’s history, but I’m worried that this series is a touch dull. So far, none of the characters have grabbed me, so I find it a little hard to care about what they’re up to.

Superman #14 – I have no idea what’s been going on in Superman and his related titles since Brian Michael Bendis took over, and reading this issue doesn’t help a whole lot.  I only picked this up because it’s the first appearance of the new Legion of Super-Heroes, a perennial favourite of mine. That scene, at the end, was handled very nicely, but the first two-thirds of this comic made no sense to me.  I kind of wish that DC had recap pages like Marvel books do. I’m still cautiously excited about the Legion though… 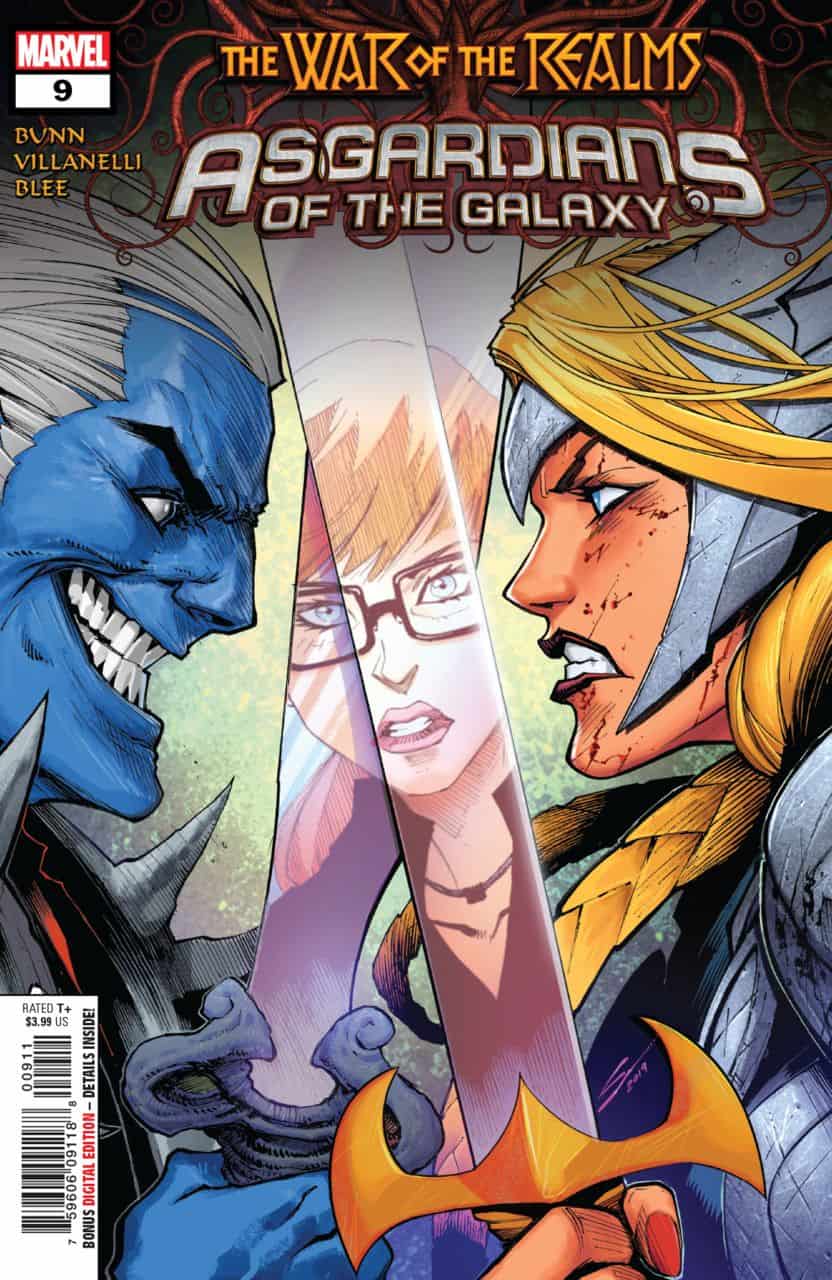 Asgardians of the Galaxy #8-10 – I’m not surprised to see that this title didn’t last, but it’s a shame.  Like his Fearless Defenders of a couple of years ago, Cullen Bunn has gathered together an interesting grouping of heroes, and managed to integrate them nicely into the stuff that’s been going on in the Marvel Universe.  I’d like to see more, but know it’s not likely to happen. At least Valkyrie’s death was put to good use here, unlike the way it was glossed over in War of the Realms.

Avengers #19&20 – These two War of the Realms tie-ins allow Jason Aaron to explore a couple of characters who don’t have their own books anymore.  The first issue here deals with Gorilla-Man Ken Hale, while the other focuses on She-Hulk. They’re good issues, suggesting that Aaron might be better suited to single-character books (which his Thor decidedly isn’t).  They’re also total fill-in while WotR plays out.

Fantastic Four #11 – So the Richards kids need to take a driving test, even though they aren’t sixteen, and one that applies to the various flying vehicles that the FF have had them using.  I like the idea of a special branch of the DMV for special vehicles (even if that raises questions about plates), but can’t imagine any DMV agents anywhere would go to the family’s home to deal with this stuff.  Dan Slott seems torn between making this book serious and going for humour. This issue has a lot of artists on it – is Slott running behind in scripts? 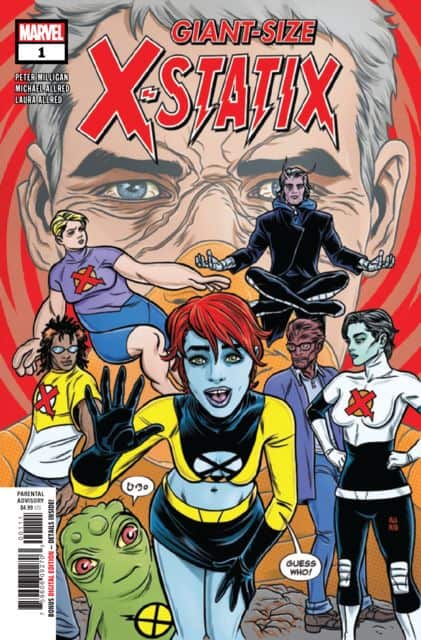 Giant-Size X-Statix #1 – Peter Milligan and Michael Allred brought their classic team back, with some new legacy characters being used to replace deceased characters.  The one-shot focuses on the daughter of U Go Girl, who discovers that Edie was her mother, not her big sister, just as she develops the same powers and blue skin. She doesn’t want this life, but when Zeitgeist returns, and turns evil, she doesn’t get a lot of choice in the matter.  It looks like X-Statix is coming back next year, under the name The X-Cellent, and I’m intrigued, but would want to see that Milligan and Allred have something new to say about celebrity, instead of just retreading the old themes.

Mr. & Mrs. X #7-12 – The second half of Kelly Thompson’s series starring Rogue and Gambit ended up being one knowing Rogue or Gambit cliché after another.  Rogue loses control of her powers, and then gains it back. Gambit gets involved in something to do with the Thieves Guild trying to supplant his position, and then not.  There is even a detour to Mojoworld, where the common people rise up, for like the ten thousandth time. Thompson makes these tropes fun, but I don’t understand why it’s so hard to do something new with these characters.  The first six issues of this title showed a lot more promise. Now the couple is moving towards Excalibur, where I’m sure Rogue will have problems with her powers, and if the series runs long enough, they’ll all end up in New Orleans dealing with the thieves.

Savage Avengers #3 – The team is finally together in this rather chaotic issue that has Elektra just popping up.  What’s the deal with her now – is she still in charge of the Hand? It’s so hard to keep some of these characters straight.  This is enjoyable, but nothing too special.

Spider-Man: Life Story #2 – I love this writing in this Elseworlds style story that has Peter Parker aging in real time.  In the 70s, he’s working for Reed Richards (alongside Otto Octavius), and is with Gwen Stacy, who works for Miles Warren. Flash Thompson died in Vietnam, and Peter feels guilty about that.  Mary Jane, who is engaged to Harry Osborn, calls him out for never doing anything except judging people, but then Harry’s father gets into his head, we see the birth of the Black Goblin, and discover that unlike all of Peter’s other foes, Miles Warren is not as good as he seems.  It’s a tightly-written issue, which, like the first one, is hurt badly by Mark Bagley’s artwork. First, for an issue set in the 70s, things seem very timeless, and aren’t visually tied to that era. There’s two ways this could have been accomplished – an artist could have emulated how Spidey books looked at that time, or could have leaned in to depicting 70s vehicles and fashions.  Instead, this looks like a Mark Bagley comic from any time in the last twenty-five years. The changes to Peter’s costume do not reflect the time at all, which further threw me out of the story. This is a good series, thanks to Chip Zdarsky’s masterful writing and good understanding of what makes Peter tick, but it is definitely hampered by Bagley’s art.

Star Wars #108 – So Marvel decided it would be amusing to add one more issue to the classic series that ran in the 70s and 80s, bringing back a few characters that were specific to that run.  I guess it’s a good exercise in nostalgia, but as someone who has read every one of the original Marvel run, I can’t say I felt any thrill at seeing these characters again, or felt any kind of recognition of the approach those books took at the time.  It feels like this was a bit of wasted potential.

Star Wars: Age of Resistance – Finn #1 – I’m not sure where I stand on Finn.  In two films, he hasn’t done very much beyond provide some exposition (his entire arc in The Last Jedi didn’t actually contribute to the story much), and he’s portrayed as both coward and hero.  This story, from his time as a Stormtrooper in the First Order, tends to portray him heroically, and gives us a chance to see how he managed to survive in such a heartless environment. Tom Taylor is a good writer, so the story is solid, as is Ramon Rosanas’s art.  I would argue that none of the new trilogy characters have the potential to become as iconic as the original trilogy characters, and that makes this latest spat of one-offs a lesson in diminishing returns.

Star Wars: Age of Resistance Special #1 – We don’t know very much about the characters from the more recent Star Wars films, so this special, which features Maz Kanata, Amilyn Holdo, and BB-8 in stories, starts to fill in some of the gaps.  It doesn’t do a lot for me, but it does help explain why Holdo would be given a position of power in the most recent film.

Thor #14 – We see the battle between various Thors and Malekith from the perspective of Young Thor.  I’m beyond tired of Jason Aaron visiting Thor’s ancient past and far future; I know that there’s a King Thor mini coming, but I hope that’s the end of it.

Tüki: Save The Humans #3&4 – These are the last two issues of Jeff Smith’s latest series, which has been on hiatus for a couple of years.  This is an odd tale, showing life on Earth as the first hominid societies were forming. It’s cute, a little weird, and annoyingly sideways.  Jeff Smith’s post-Bone work is interesting, and I’d like to see more of this.

She Wolf Vol. 2: Black Baptism – Rich Tommaso doesn’t usually do the expected thing with his comics, and the second volume of She Wolf is a good example of that, as he focuses on a new character (the younger sister of the first volume’s She Wolf).  This one is weird, and I can’t say I enjoyed it much. The new characters did not get anywhere near enough space to become characters.