Over the decades people have lost a sense of the horror that was Pol Pot and his Khmer Rouge regime that took over Cambodia. The man’s actions led to the death of 2 million Cambodians. Nearly a quarter of the country’s population died in his name in the ’70s. If you bring his name up in a discussion, you might as well referenced a person who got kicked off first on an early season of Survivor.. Funan does not forget the atrocities of Pol Pot. Filmmaker Denis Do digs deep into what he and his family had to do when the Khmer Rouge took control of his country. The animated feature comes out on Blu-ray this December 3 from Shout! Factory and GKIDS. Here’s the press release: 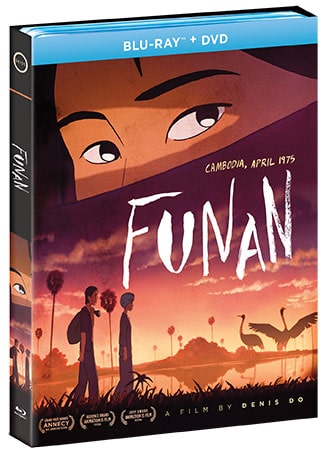 Winner of the top prizes at the Annecy Animation Festival and the Animation is Film Festival, the critically acclaimed drama Funan is a searing and remarkable debut from filmmaker Denis Do. Based on the true life stories of his family’s harrowing experience under the Khmer Rouge, this thrilling story of love, loss and enduring hope in the most trying of times makes its debut as a Blu-ray + DVD combo pack December 3rd, 2019 from GKIDS and Shout! Factory. Featuring the voices of Bérénice Bejo (The Artist) and Louis Garrel (The Dreamers), as well as a new English-language version, the release also includes an interview with director Dennis Do, storyboards and concept art as bonus features. Fans can pre-order their copies now by visiting ShoutFactory.com

Cambodia, April 1975. Chou is a young woman whose everyday world is suddenly upended by the arrival of the Khmer Rouge regime. During the chaos of the forced exile from their home, Chou and her husband are separated from their 4-year-old son, who has been sent to an unknown location. As she navigates her new reality, working in the fields day and night under the careful watch of soldiers, and surviving the small indignities and harrowing realities of the increasingly grim work camps, Chou remains steadfast in her determination to reunite her family – even if it means risking everything.

Check out the trailer here:

About GKIDS
GKIDS is the producer and distributor of award-winning feature animation for both adult and family audiences. Since 2010, the company has scored an astounding 11 Best Animated Feature Oscar nominations with The Secret of Kells in 2010, A Cat in Paris and Chico & Rita in 2012, Ernest & Celestine in 2014, The Tale of The Princess Kaguya and Song of the Sea in 2015, Boy and the World and When Marnie Was There in 2016, My Life as a Zucchini in 2017, The Breadwinner in 2018, and Mirai in 2019. GKIDS also handles North American distribution for the famed Studio Ghibli library of films, one of the world’s most coveted animation collections with titles Spirited Away, My Neighbor Totoro, Princess Mononoke and others. GKIDS also produces the annual LA-based film festival, ANIMATION IS FILM, which embraces the highest aspirations of animation as a cinematic art form and is a vocal advocate for filmmakers who push the boundaries of their work to the fullest range of expression of which medium is capable. www.gkids.com