The Need for Variety in Superhero Movies

Welcome to the column where I talk about how super-hero movies need to develop in the future. 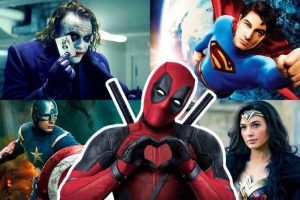 Super-hero movies have become extremely popular nowadays and every movie is touted to be something different and unique, but it is not hard to look at recent offerings and see that these movies are in danger of forming a rut that could lead to stagnancy and destruction of the genre. I don’t want to be overly negative considering that I have been enjoying most of the movies and don’t wish huge changes. However, I do believe it could be rectified with a simple solution. The movies have to be tonally different from one another and they need to tackle new genres that could stretch its limits

Let me explain it further with an example. Let’s take the upcoming Joker release. It looks to be something new and different. It is the perfect Elseworlds story. It looks to be a hard hitting story and this exemplifies the need for more mature storylines. Some DC movies tried to accomplish that, but they sacrificed Idealism for Realism which caused it to be maligned as a result. I believe that the movies should have a fine balance between achieving the idealism of a character and establishing that in a realistic path. I do recognize that it is easy to write it down, but tough to bring it on screen but it can be achieved; after all there are so many amazing filmmakers today. Check bridge for more super hero movies.

The Marvel Cinematic Universe (MCU) movies have taken an all-ages, jokes-filled approach to their super-hero movies. While I have loved their movies and it has become hugely popular and well appreciated, this approach is a surefire way to guarantee an eventual rise of fatigue and inevitably become boring. I personally think they should focus on more character and story oriented movies. A Tone that suits the character instead of the character suiting the tone. Again, I must bring in the earlier comment about achieving a balance. There should be a balance between dark and light hearted stuff. The Netflix shows were a welcome contradiction to the happy go lucky movie stories, but who knows whether the Disney+ shows can achieve that level?

The thing is every hero is based on human archetypes.

As humans we are not restricted to a few emotions and we have bad days, good days and sometimes days which could be classified as neither. That holds true for super-heroes and that must be represented on screen.

Super-hero movies are hugely popular right now and as a huge fan I want it to stay that way and make sure it lasts for a long while. Bringing in new content is great, but make sure every movie tries to offer something new and different that makes it unique all on its own.